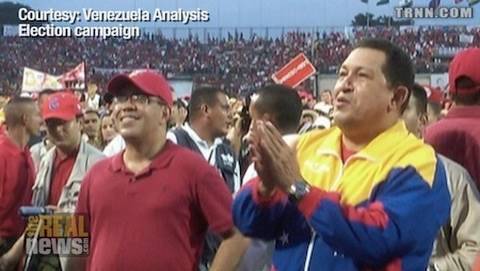 PAUL JAY, SENIOR EDITOR, TRNN: Welcome to The Real News Network. I’m Paul Jay in New York City. Now joining us is Gregory Wilpert. He’s the author of the book Changing Venezuela by Taking Power. He’s now working with the Rosa Luxemburg Foundation in Venezuela. He’s cofounder of the well-known website Venezuelanalysis. He is married to the Venezuelan consul general in New York City. Thanks for joining us.

GREGORY WILPERT, AUTHOR, EDITOR OF VENEZUELANALYSIS: Thanks for having me.

PAUL JAY: So let’s talk a bit about Santos. The new president of Colombia and President Chávez met recently in Colombia and made up after a lot of Santos’s election campaign, I’ve been told, was a pretty fervent get-tough-with-Venezuela position, but even more so, the rhetoric between the outgoing president, Uribe, and President Chávez had reached such a point that diplomatic relations were broken off by Chávez. Venezuela has accused Colombia of allowing the US to beef up their military bases in Colombia, which they say is being done as a threat to Venezuela. So how come all of a sudden we’re hearing sounds of friendship?

WILPERT: I think the main reason that the two made up so quickly is that Santos actually represents the business interests in Colombia. That is, Colombia and Venezuela both suffered economically quite a bit due to the break-off of relations, which actually already started, at least on the economic side, last year when Uribe signed a military agreement with the United States to allow the US to use seven military bases in Colombia. And ever since then, trade between the two countries has declined something like 70 percent. And so now I think both want to recuperate that trade, and that’s why they were waiting, basically, for Santos to come in, to provide an excuse to start over the relationship between the two countries. But there’s another factor, too, that might be playing a role, which is the upcoming elections in Venezuela. I think Chávez wants to have a good relationship between the two country. After all, there are millions of Colombians living in Venezuela, and it hurts Venezuela to have—and not just on an economic level, but also on a personal level, to have a broken relation with Colombia.

JAY: What’s the economic situation of Venezuela and Colombia? How much has the global crisis affected both countries?

WILPERT: Price of oil went down for a long time. It’s recovered a little bit. But as a result, Venezuela cut back very significantly in its spending. And so that really pushed the country into a recession as a result, and it’s only now recovering from that. And it had a pretty serious recession, actually, lost 3 percent of gross national product in 2009, and earlier this year, the first quarter of this year, was something like -5.8%. So it’s been a pretty significant effect, and that’s why I think having trade with Colombia would help overcome this recession, certainly.

JAY: The US rhetoric has been all about FARC and Venezuela, and Venezuela is the point for drugs to head north to the United States, and the Plan Colombia. Much of this rhetoric about the investment in Colombia has recently been about Venezuela. Now, Santos apparently withdrew the application or his request to the OAS to do an investigation whether FARC’s in Venezuela, saying he’s—I think he said, more or less, they’re going to accept Venezuela’s word on this. It seems a break not just with Uribe but also with the American rhetoric.

WILPERT: Colombian policy towards Venezuela has been inconsistent for—at least since Uribe came into office, for the past eight years, because there seems to be an internal tension within Colombia, that on the one hand they want the good economic relations, on the other hand they’re often pushed, I think, by the United States to criticize Venezuela. And also, because they’re politically on opposite sides of the ideological spectrum, they’ve often entered into conflict with each other. And the United States actually has been actually quite consistent in trying to foment discord between the two countries.

JAY: Now, Venezuela recently, in the last year, did some big arms purchases, I think, particularly from Russia. How much of this was about Colombia?

WILPERT: Certainly there’s—a lot of it, actually, had to do with Colombia, because a lot of the arms that Venezuela has been purchasing from Russia are things like helicopters and patrol ships, a lot of it designed, actually, specifically to combat drug trafficking.

JAY: I mean, that’s the big charge from Colombia, and particularly the United States, that Venezuela’s not doing enough about drug trafficking. And, you know, the US has directly said that Venezuela protects FARC in Venezuela, FARC being the—some people call left, some people call narco-guerrilla group. But at any rate, it’s the one in war with the Colombian government. What do we know about FARC’s presence in Venezuela?

WILPERT: Well, no, we don’t know very much, but one can be almost certain that there is some FARC in Venezuela, because we’re talking about a 1,200 mile border between the two countries that is practically uncontrollable. Venezuela has something like three times as many soldiers along the border as Colombia does. So it’s actually controlling—just from a military point of view, it’s controlling the border a hell of a lot better than Colombia is. But, still, it’s impossible to control the entire border. And so it’s pretty certain that there’s infiltration not just of Colombian guerrillas, but also of paramilitary forces, and of course of drug traffickers of various kinds. And there have been fights between the Venezuelan military and those various armed groups. So, yeah, they cross the border, but that doesn’t mean that Venezuela is actively supporting them, which is the actual main argument of Colombia. There’s absolutely no proof that Venezuela is supporting them. As a matter of fact, Chávez now—in this recent agreement, said that Venezuela will not tolerate any Colombian camps, guerrilla camps in Venezuela and would do all it can to actually promise—he will do all he can to get rid of them if they are found by the Venezuelan military.

JAY: So is this rapprochement with Santos and Chávez something new in Colombian-Venezuelan relations? Because they used to have these rapprochements with Uribe as well, and you’d have this war of words, and then they’d make up and visit each other’s cities, and then three months later they’d be back, you know, attacking each other—verbally, at least.

WILPERT: Well, it’s certainly possible that relations will break apart again, because the up and down, I would say, between the two countries almost always comes or starts in Colombia; that is, at some point, somebody launches the allegation again that Chávez is supporting the FARC or is doing something against Colombia, and that’s when the relations turn sour again. And that’s almost always what had happened in the past.

JAY: Is there indication that Santos plans to be more part of this Latin American front, Lula and all the other countries that have been sort of more collaborative? Or still more of this US-Colombia axis?

WILPERT: Well, the US-Colombian axis was guaranteed to be maintained and to both—continue to be strong. And that’s actually one of the factors in ruining the relationship towards Venezuela and towards the other neighbors of Colombia, that the US is constantly pushing Colombia to take a harder line against Chávez or against Correa. But I think Colombia, like I said, it’s torn internally. It’s also very interested in strengthening ties to the rest of Latin America. It’s participating, actually, in UNASUR very actively and is very interested in being a member of that, and it’s interested in also the possibility of creating a bank of the South. And so it’s an internally divided country in many ways, and that’s just one of them.

JAY: So the drumbeats we were hearing leading—some people said—to war have stopped for now.

WILPERT: Yes, I think definitely they have stopped for now. I think it’s very unlikely at this point that any kind of invasion from Colombia would happen. Santos promised that there would be no border incursion, and like I said, Chávez promised to be opposed to any FARC presence in Venezuela.

December 4, 2017
Sign Up for Our Newsletter
Help Us Make Real News!