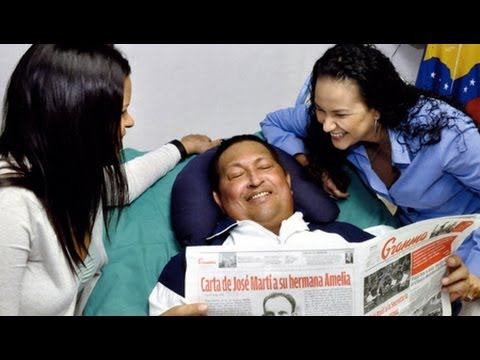 Hugo ChÃ¡vez, president of Venezuela, has been back in his country just over a week after weeks and weeks in Cuba for his cancer treatment. He remains secluded, apparently meeting only immediate family and senior members of the Venezuelan government.

And in other Venezuelan news, there’s been a devaluation of the Venezuelan currency, the bolÃ­var.

Now joining us to talk about all of this is Greg Wilpert. Greg’s a sociologist who lived in Venezuela between 2000 and 2008, where he also founded Venezuelanalysis.com. He also taught at the Central University of Venezuela. Two thousand and seven he published the book Changing Venezuela by Taking Power: The History and Policies of the ChÃ¡vez Government. He’s now back in the U.S., where his wife is the consul-general for Venezuela.

WILPERT: Well, those are a number of questions that are a bit difficult to answer because we still don’t know the definite answer to any of them. The significance, though, I think, of ChÃ¡vez’s return is basically to show that there’s still a possibility that he will return to office. They are basicallyâ€”there’sâ€”ChÃ¡vez and his closest advisers are basically still keeping the hope alive that ChÃ¡vez might retake the presidency.

But there would be no elections thatâ€”in other words, he would be cured from his cancer. There is no definitive prognosis yet as to whether that will happen or not. It seems like based on the medical reports, the official medical reports that we’ve received, which are very vague, it seems that it still could go either way. Recently the government announced that ChÃ¡vez was still suffering from what they call a respiratory insufficiency and that the treatment for that was not making much progress. So that did not sound too good. But they did say that he was responding positively to the cancer treatment. So it’s a mixed report. And it’s clear that he currently also has a tracheotomy, which means he cannot speak, and in his meetings with high-level officials of his government, he has basically been communicating by writing notes to them. But they say that he’s in good spirits and that he’s still fighting the disease and are basically, like I said, holding out the hope that he could still return to office.

JAY: President Morales of Bolivia went there just recently to visit him but wasn’t able to. So I guess his situation’s still pretty serious. I mean, we know it’s very serious, but the fact that he couldn’t meet Morales.

WILPERT: Yes, which seems a little bit surprising, because it seemed like Morales came extra to see ChÃ¡vez, and that he couldn’t see him seems a little bit strange, I guess. On the other hand, he hasn’t received any officials other than his closest advisers. That was really NicolÃ¡s Maduro, the vice president, and the president of the National Assembly, Diosdado Cabello, and then his closest family members. Those are the only ones, according to most reports, that have actually seen him. And then, of course, we saw the pictures about two weeks ago of ChÃ¡vez in bed in Cuba. So it seems like those are the only points we have to see, you know, what the possibility would be for the near future.

JAY: Is there any time frame on this issue of him being sworn in? Is there a time frame that heâ€”. Now that he’s in the country, in theory he could be sworn in.

WILPERT: Yes, there’s talk about that every once in a while and rumors swirling around. He could be sworn in. And I think that’s really perhaps one of the main reasons why he returned [from] Cuba was precisely to be sworn in. But there is no time frame. The Supreme Court basically said that since ChÃ¡vez was president before, and that essentially the swearing-in is a mere formality, it should happen, they said, but it does not affect the continuity of government, and therefore there is no real time frame. The Constitution does set a time frame for certain circumstances, but those haven’t been invoked, that is, the circumstance being an officially declared temporary absence or an officially declared absolute absence of the president that is declared by the National Assembly. But neither of those declarations have been made, and therefore there is no time frame.

JAY: Okay. Now, Vice President Maduro, at least under his authority, I guess, although they’re saying President ChÃ¡vez is still making big decisions, but the bolÃ­var, the Venezuelan currency, was devalued. So, how much and why?

WILPERT: Well, it was devalued by about 34Â percent. And the reason is very simple and straightforward economics. It was really necessary, I would say. And this, of course, for many leftists always sounds a bit like a betrayal or something, but the fact is the Venezuelan currency is constantly devaluing by virtue of its inflation. It has a 20Â toÂ 25Â percent inflation per year. And so that means effectively within the country it’s devaluing constantly.

What hasn’t been devaluing or hasn’t been adjusted is the relationship or the value of the currency with respect to other currencies around the world. And so this creates a tremendous imbalance, making Venezuelan products artificially expensive because you end up paying a lot more bolÃ­vares for anything that is produced in Venezuela because of the currency, but they’re still exchanging it at the same exchange rate as a couple of years ago. And so everything within Venezuela keeps getting more and more expensive, especially if you’re using the official exchange rate and buying things, let’s say, at the official exchange rate, let’s say, in dollars in Venezuela. So the adjustment was absolutely necessary in order to adjust or match the actual value of the currency with the rest of the world.

WILPERT: Well, yes, a lot of people, especially the opposition, say that that will just increase inflation again. But that’s not quite true. That assumes that everything that Venezuela is importing is being imported at the official exchange rate. But that’s not what’s been happening. That is, only very limited goods are imported at the official exchange rate.

A lot moreâ€”I think the vast majority of products are actually being imported at the black market exchange rate. And so that means every time the currency loses value within the country, it also loses value on the black market, and therefore there’s a constant adjustment already happening, and therefore adjusting the official exchange rate won’t make much of a difference.

What it will make a difference for, though, is it will increase the government’s resources, because now when it bringsâ€”for every dollar that it brings into the country, instead of exchanging it to VEBÂ 4, you can exchange it into VEBÂ 6. So, in other words, it can increase almost by 50Â percent the amount of currency that is in circulation. Now, that of course could increase inflation, but it basically makes the government that much richer and makes Venezuelan debt also much cheaper. So that’s also another advantage.

JAY: And what does it do to an ordinary worker’s wages?

WILPERT: Well, if they were buying things directly abroad, then of course it wouldâ€”at the official exchange rate, that would of course lower their purchasing power abroad. But like I said, almost nobody does that, very few people do that, actually use the official exchange rate to buy things in other countries. So within the country, though, like I said, I don’t think the impact will be very big. As a matter of fact, in previous devaluations, inflation did not increase much, maybe just a slight blip, but not by the amount that the currency was devalued.

JAY: And why is there such high inflation in Venezuela? Some of the other countries that have oil economies too, I guess you could say Ecuador, inflation is not as rampant.

WILPERT: Well, the differenceâ€”you have to look at each country in comparison. I mean, the difference with Ecuador is that its oil production is a fraction of what Venezuela’s is. I don’t know exactly what the percentage is of foreign revenue that the Ecuadorian economy has from its oil exports, but in Venezuela 90Â percent of its export revenues come from oil production. And so that of course means that practically all of its foreign revenues come from oil. And so when it sells oil abroad, it brings those dollars into the country and brings more currency in circulation, whichâ€”chasing after the same amount of goods. And so that of course increases inflation in Venezuela.

And that’s a chronic problem for Venezuela. It has been, basically, ever since the oil boom years of the early 1970s. As a matter of fact, in previous presidencies inflation averaged around 50Â percent per year. So, historically speaking, the ChÃ¡vez government’s inflation rate is almost half of what it was in the pre-ChÃ¡vez inflation rates.

JAY: And to what extent is Maduro establishing himself as the next leader in terms of public opinion?

WILPERT: Well, that’s one of the reasons it seems that there might be elections coming up, because Maduro seems to be almost campaigning. I mean, he’s on television all the time. He’s basically keeping up a public appearance schedule that is on a par with ChÃ¡vez’s public appearances, with inaugurations and events and activities and speeches almost every day or every other day. So he’s constantly in the public eye, and he has certainly benefited from that. According to recent polls, if an election were called this week, then Maduro would probably win with 50Â percent of the vote, and probably the most popular opposition candidate, which is the ex-opposition presidential candidate, Henrique Capriles Radonski, would get only about 34Â percent of the vote. So it seems that Maduro has a significant lead over Capriles Radonski, and I think that’s because he seems to be campaigning, but also because people are giving him credit for the relatively smooth continuity and functioning of the government.

JAY: Alright. Thanks for joining us, Greg.