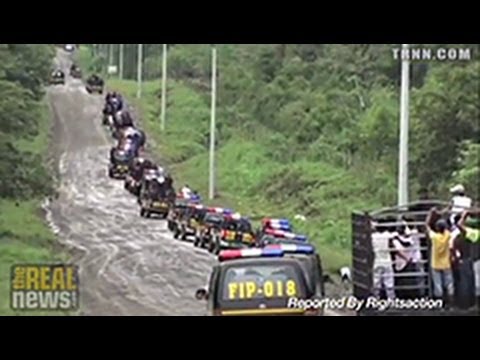 The Canadian mining company Hudbay Minerals is going to trial over allegations of murdering, attacking, and raping indigenous communities in Guatemala. The attacks happened in 2009 by Hudbay subsidiary CGN and its Phoenix mine property near El Estor, Guatemala. In August 2011, Hudbay says it divested itself of the project and no longer has any operations in Guatemala.

Now joining us to discuss this is Grahame Russell. He’s the director of Rights Action that’s been working closely with the plaintiffs.

Thanks for joining us, Grahame.

GRAHAME RUSSELL, CODIRECTOR, RIGHTS ACTION USA/CANADA: Thank you for having me on.

RUSSELL: I’ll give a very brief context that deals with the military coup in 1954, the genocide in the ’80s, and then a former Canadian–a previous Canadian company called Inco.

After the U.S.-backed military coup in 1954, the military regime in Guatemala gave out initial nickel mining concessions to the Canadian mining giant Inco. They tried to operate the same mine in the ’70s and ’80s, and they partnered with the U.S.-backed military regimes that we now know were carrying out genocide in certain regions of Guatemala against their own population. And while Inco was trying to operate the mine in the ’70s and ’80s, a whole series of very serious violations occurred, including forced evictions, burning of indigenous villages to the ground, killings, and disappearances. No justice was done for any of those crimes at that time.

Then what happened is in the early ’80s, Inco mothballed its mine and then tried to reopen it in 2004. When Inco tried to reopen the mine in 2004, they helped incorporate a new company, Skye Resources, that got the same mining company going all over again, the same mining operation going all over again. Skye Resources was bought by Hudbay Minerals in 2008. This is the link with Hudbay Minerals.

Hudbay Minerals tried to operate the mine from 2008 to 2011 and was directly or indirectly responsible for the same types of forced evictions, burning of villages to the ground, killings, shootings, gang rapes that had occurred in the ’70s when Inco was the owner.

And it was a Toronto-based law firm, Klippensteins, that took the decision to come forth and present themselves to the plaintiffs in Guatemala and say, we think we’re in a position to file three civil lawsuits in Canada against Hudbay Minerals and CGN, its subsidiary, for those three particular very serious human rights violations.

Those are the cases that have now been–after three years of pretrial motions to dismiss, the Ontario Superior Court has ruled that Canada is the proper jurisdiction to hear these trials, that Hudbay can be held directly accountable in Canadian courts for what allegedly occurred in Guatemala, and that Hudbay can also be held accountable in Canada for what its subsidiary company, CGN, allegedly did in Guatemala.

DESVARIEUX: And Hudbay Bay isn’t denying that this confrontation took place. They actually issued a statement and they posted it to their website. It says, quote:

“Throughout the attacks, CGN security and other personnel showed extraordinary restraint and acted only in self defence. Their measured response to the various attacks helped to prevent a further escalation of violence, thus limiting the number of injuries on both sides of the confrontation.”

We should also remind viewers that Hudbay has ceased operations in Guatemala.

But can you just explain for us, Graham, what is the significance of them being tried in Canada?

RUSSELL: Firstly, on the facts of the case, I mean, clearly–I’ve worked with the Mayan Q’eqchi’ people for over ten years and seen these things, these types of situations firsthand in many different mining-related struggles across Guatemala. And the repression that took place both in the community of Lote Ocho, with the forced eviction, the burning of 100 houses to the ground, and, again, gang rape of women, is unfortunately very common in mining-related struggles. The repression that took place the day that Adolfo Ich was shot and killed and when German Chub was shot and paralyzed from the chest down is also very common.

And the mining companies always put out the same sort of PR statements, and not surprisingly so. They’re not going to admit to their guilt. But I have no question in my mind that this was a peaceful protest.

Well, first off, with respect to the gang rapes, they are the legitimate owners of their land, and that this was an illegal forced eviction that became extraordinarily violent, and that the company should be held to account for that. And on the day that Adolfo Ich was shot and killed, it was a peaceful protest against the mining company, and they opened up fire with deadly force. And they should be held to account for that.

DESVARIEUX: Held to account in Canada. So what’s the significance of that?

RUSSELL: Well, that–firstly, there’s no way at all that justice can be done in Guatemala. Guatemala’s a profoundly undemocratic country where the rule of law and the administration of justice fundamentally do not work. I’m overstating that point a bit, but not much.

Secondly, these cases should be heard in Canada, whether or not the legal system in Guatemala works, which it doesn’t. They should be held in Canada because all of the fundamentally important corporate decisions were taken by Hudbay in Toronto. Hudbay had complete ownership control over CGN. This was Hudbay’s only mining operation in Guatemala. There are managerial people that held positions in both Hudbay and CGN at the same time. So Hudbay had corporate control over all the important decisions as to what was going on in Guatemala.

And that’s–and for those reasons, that’s why the trial should take place in Canada.

What’s the fundamental significance of it is that this has never happened before. There are dozens, if not hundreds, of Canadian mining companies operating all over the world, and repression and human rights violations like this are quite common in many countries around the world at Canadian-owned mine sites, and yet none of these cases have ever been able to proceed in Canadian courts until this case. So, actually, the precedent, the legal precedent has already been set for the first time in Canadian legal history that a Canadian company will be held to account in Canadian courts. And we’ll see what happens as the trial proceeds over the next five to ten years.

DESVARIEUX: Okay. Let’s talk about the situation on the ground in Guatemala. We’re hearing that people are receiving threats and there’s backlash towards the indigenous community. Can you talk about that a little bit, Grahame?

RUSSELL: Very serious situation. And this happens systemically and sort of predictably in a country like Guatemala. Whenever people, whether they’re indigenous people or nonindigenous people, stand up to fight for their rights and defend their rights, they become victims of further repression, threats, and intimidation. And it’s no different in this case with respect to the Mayan Q’eqchi’ people struggling to get control over their lands and territory and to fight for justice with respect to the Canadian mining company.

All of the plaintiffs–Angelica Choc, German Chub, and the 11 women that were gang raped in the community of Lote Ocho, all of them have received threats and different forms of harassment and intimidation since these, the cases, the suits were first filed in late 2010.

With–very recently, there’s been a concerted effort by CGN, the former Canadian subsidiary company in Guatemala, to divide the 11 women amongst themselves, and there has been direct threats against the women that they will lose access to their land, they will be kicked off their land in Lote Ocho, if they don’t drop the suits in Canada.

There has been rumormongering spread that some of the women when they come to Canada to participate as plaintiffs in the trial, they’re receiving vast amounts of money in Canada and they’re not sharing it with anyone. (A) These stories are absolutely false. The case hasn’t even gotten to trial yet. But secondly, these are incredibly impoverished people living in a very remote region. And when–this type of rumormongering can become very violent and divisible very quickly amongst family members and community members.

So there’s a concerted effort going on now by the plaintiffs and their families and supporters and community members–in Rights Action, we’re doing our best to support this–to get through the lies and painstakingly work with the plaintiffs in the affected communities to say that all of these things are false and this is the reaction of the mining company because it wants you to drop the suits in Canada.

DESVARIEUX: Okay. Well, this’ll certainly be a long trial, and we’ll be updating our viewers on the progress of the trial.

Thank you so much for joining us, Grahame.

DESVARIEUX: And for all you Real News viewers, please be sure to follow us on Twitter at the handle @TheRealNews.

Thank you so much for joining us at The Real News Network.

Grahame Russell is a non-practicing Canadian lawyer, author, adjunct professor at the University of Northern British Columbia and, since 1995, director of Rights Action ([email protected], www.rightsaction.org,www.facebook.com/rightsaction.org).