Anything Can Happen in Peru’s Presidential Election

Prof. Gerardo Renique talks about the candidates and how the far right and left both have a genuine chance of winning in Sunday's election

Prof. Gerardo Renique talks about the candidates and how the far right and left both have a genuine chance of winning in Sunday's election 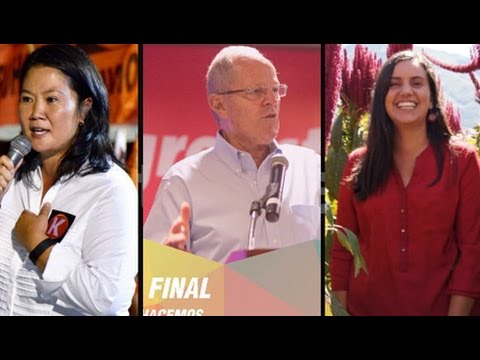 GREGORY WILPERT: Welcome to the Real News Network. My name is Gregory Wilpert and I’m coming to you from Quito, Ecuador.

Peru is holding elections this coming Sunday, April 10th. According to most polls, the Republican candidate Keiko Fujimori who is also the daughter of former President Alberto Fujimori is leading the polls with 30%-40% of the vote. Tied for second place are somebody called Pedro Pablo Kuczynski and Veronica Mendoza. Kuczynski is a center-right politician with a long political trajectory in Peru, having served as Minister under former President Alejandro Toledo. And Veronica Mendoza on the other hand is a complete newcomer to Peruvian politics and she the candidate of the left. She emerged from obscurity and now has a chance of making the run off with Keiko Fujimori should Keiko feel to make 50% of the vote.

So with us today to talk about the different candidates and the political situation in Peru is Gerardo Renique. He is originally from Peru and is currently Professor of History at the City College of New York, specializing in Peruvian and Mexican History. Thanks for joining us Gerardo.

WILPERT: Great. So let’s start with the situation with the elections. For a while it looked like the elections might even be canceled because several candidates were disqualified for various irregularities in their campaigning and their nomination process. What’s going on? Is this still going to be a mostly free and fair election on Sunday?

RENIQUE: Yea, I mean election night pretty much seems is going to be a free and open election but an important thing to remark is there’s a campaign, a systematic campaign, by the press, the media against the candidate of the left Veronica Mendoza. In the case of the disqualification of the two candidates, they were, both of the candidates they have lied in their CV’s. They were using irregular money; they were caught distributing money in some of the events. But the problem is that the left have presented evidence of Fujimori doing the same. However, she hasn’t been disqualified from the election. So in a certain way there is some favoritism towards Fujimori but overall I think it’s going to be an election that at the time of the vote and the counting of the vote, it’s going to be clean and free.

RENIQUE: First of all, you need to take into account, let’s talk first who’s behind Fujimori? Fujimori is the candidate that is the favorite of the most extreme right-wing group. She represents also the interests of all the sector that emerged during Fujimori that we can call new rich people, new entrepreneurs, politicians that have rallied around Fujimori. Now what Keiko Fujimori has a following around this sector and has a very important support among the lowest, the poorest sectors of the urban population; particularly in the city of Lima that concentrates almost a fourth of the population in Peru. And that popularity have its origins during the 10 year regime of Fujimori that overlapped with a war between the armed forces and the insurgents of [shining path] that generate a tremendous polarization in security, killing of popular leaders, kidnappings. So in that atmosphere you know Fujimori was seen among the population as this pacifier and you know the last days of the country’s insurgency was to place in shanty towns where poor people lives.

On the other hand, Fujimori create all the clientelistic systems. His regime he created all these law paid jobs that in a certain way offer some relief. Keiko Fujimori have during the last years have maintained an organization in these shanty towns that pretty much [ ] and is very similar to the type of clientelism that is practiced by the official Institutional Revolutionary Party in Mexico. It’s based on the distribution of food, the distribution of coupons for supermarkets, the distribution of coupons that can be redeemed for buying electrical appliances, even in stores that belong to support the Fujimori. So that is what explains the popularity of Keiko Fujimori. But on the other hand you need to take into consideration also that Fujimori became popular is because there are two elements that are very important, are 2 important cases of the Peruvian landscape at this moment.

There’s a very strong anti-Fujimori on one hand and on the other hand there is a very strong anti-left-wing feeling. So Fujimori and the press they galvanize, they prey on this anti [ ] this anti-left-wing feeling. They rally around Fujimori. On the other hand, the sudden rise of Veronica Mendoza can be explained by the anti-Fujimori feeling. You know what I’m saying? On one hand anti [ecerdismo] on the other hand anti-Fujimorismo. The interesting thing is that for the first time we’ll have Keiko Fujimori it’s 4 years old and that’s another factor. That’s why Veronica, something that plays in the favor of Veronica Mendoza it’s a woman and she’s younger than Keiko by 4 years, she’s 36 years old. So that explains the part of the popularity of Keiko Fujimori.

WILPERT: Yea that brings us right to Veronica Mendoza. She seems to have come out of nowhere. You mentioned she’s only 36 years old and now actually has a chance of making the runoff. What’s going on with the left in Peru? I mean for a long time it seemed like that at first President Ollanta Humala was going to represent the left but then he completely backtracked on that, now she’s coming. Is there’s a chance? Do you think that of her winning, making the runoff? And where is she coming from? Who is she representing?

RENIQUE: You know first of all, the results of this election are very uncertain. The last 3 elections in Peru have been very uncertain. Before getting into Mendoza, first of all the last 3 elections in Peru, the elections after the fall of Fujimori. You know Fujimori ruled Peru for 10 years between 1990 and the year 2000. The few Presidents that have been elected, Alejandro Toledo, 2001. Alan Garcia in 2006. Ollanta Humala in 2011. Those 3 candidates ran on electoral platforms that were center-left. You know Alan Garcia known more as leftist than Humala and Toledo more to the center than Garcia. But those 3 candidates win with the support of the left. You know that’s one consideration. The second element regarding now going into Veronica Mendoza.

Veronica Mendoza he start his political career in the campaign of Ollanta Humala. As a member of the nationalist party, Humala’s party. But a few months and your listeners of this prompt should be aware that Humala’s elected as a leftist, center-left candidate and within 2-3 months, he turns to the right. He dismisses his left-wing supporters and cabinet members and a number of parliamentarians that were elected under Humala, they become independents and they force an alliance with the left. Veronica Mendoza was a member of parliament and he was a prominent member of this minority group of left-wing progressive parliamentarians. Right, that’s what now.

On the left what has happened with the left is that in the last 10-15 years what we’ve seen is the emergence of younger generation of leftists. Younger generation of leftists that kept the distance from the established left that gave their support to Humala, Garcia, and Toldedo. You need also to take into consideration that given the war on the counter insurgency, the left, Peru has a very strong left during the 80’s and the early 90’s. That left depleted. It’s depleted by the war and it’s ideologically defeated by neoliberalists. So what we see in the last 15-20 years is an emergence of a very vibrant popular movement, particularly outside of Lima in the regions that had an impact of destructive industry, mining/oil industry.

On the other hand, we’re witnessing in the last 2 years, a very strong youth movement. A very strong youth movement like the social [ ] movement outside the capital of Lima that leans toward the left but doesn’t endorse the left. So out of that, those movements have emerged. A number of political formations. One of those is Dia De Liberdade. That is a left-wing formation with a very strong environmental element. On the other hand, a youth movement. The movement that supports Mendoza and Mendoza’s a member of this movement, is a youth movement in alliance with social movements. It’s very young people that has been very active in creating this Frente Amplio, Broad Front, that is supporting Mendoza. So what we have here in these Broad Front is the younger formation of left-wing political formations, local regional movements, collectives, and a sector of the old left that as individuals are participating in this effort to run an independent left-wing candidate.

Now unlike the last 3 elections, this is the first time that the left is running independent. It’s not running in support of an Humala that was a nationalist on the center-left. It’s not running in support of Toledo that run a center-left platform in 2001. Or it’s not in support of Alan Garcia that run in an anti-neoliberal, social democratic type of platform and turn to the right a few months after taking office. So that’s the panorama on the left. On the other hand, we’ve seen with Vero Mendoza, very similar to where it’s happening with Bernie Sanders in the U.S. Vero Mendoza started her campaign with 2% of preference in the polls. At the moment she’s in a tight second with the other right-wing candidate between 15-17%.

So that’s the situation at the moment and Peru has a ballot type system. It’s very unlikely for Fujimori to win the election in this coming Sunday. She will need 51%. That’s going to be impossible. So more likely it’s going to be a second round of votes that is going to be between Keiko Fujimori. Again it’s going to be very uncertain who’s going to come second. It might be Pedro Pablo Kuczynski, I’ll talk about him in a minute or Vero Mendoza. That’s the situation in Peru but again the other element that’s very substantial is between 20-25% of the voters are not, they haven’t who they’re going to vote to. So the final result I’m telling you is uncertain and I don’t..

WILPERT: Yea that seems like such a high percentage of undecided voters. Unfortunately, we don’t have time to get to the other right-wing candidate, Pedro Kuczynski. But we’ll see what happens and maybe after the election we can talk again depending on what happened on Sunday. But unfortunately we’ve run out of time right now.

RENIQUE: Thanks for having me Greg. Bye.

WILPERT: Thanks for joining us Gerardo.

WILPERT: Okay and thank you for watching the Real News Network.