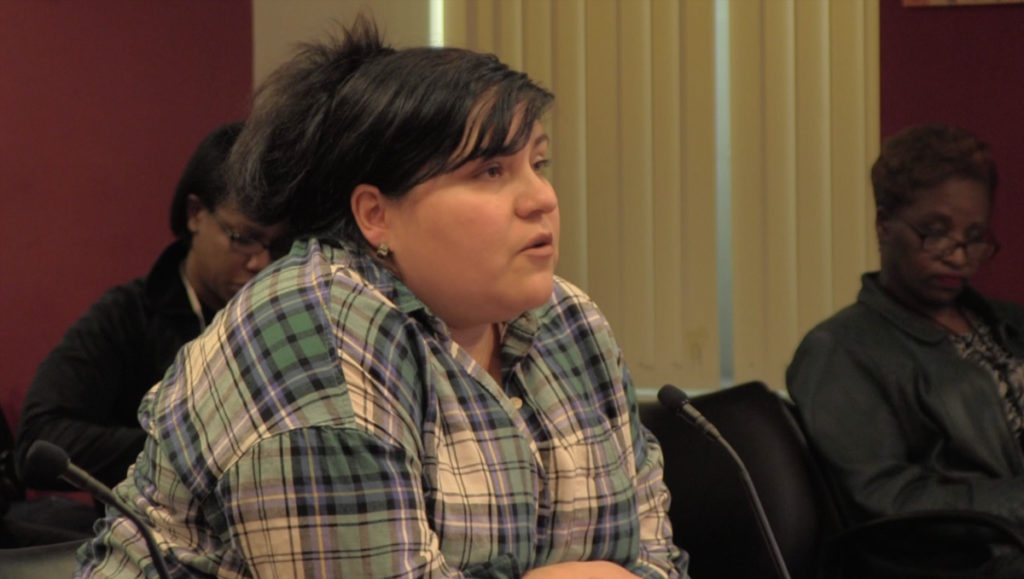 JAISAL NOOR: I’m Jaisal Noor for the Real News Network. We’re at Baltimore City Schools’ headquarters on North Avenue. This is the first Baltimore School meeting in two weeks since hundreds gathered to express their outrage at freezing classrooms across Baltimore City.

Tonight, dozens attended a packed but more subdued school board meeting to demand things like increased transparency, culturally relevant curriculums, push the board to do more to advocate for increased funding from the state, as well as delay proposed changes to how individual schools are funded.

KIM TRUEHEART: We want the funding in the classrooms, and if we’re not striving to that, then I got a problem.

JAISAL NOOR: The board was scheduled to vote on changing the “fair student [funding]” formula, which determines how much money traditional public schools receive. Public charters who have more control over their budgets are not affected. The current formulas being used for the past decade gave more weight for students who struggle academically. Proposed changes would increase funding for schools who have populations over 80 percent of their students in poverty.

SONJA SANTELISES: Funding the actual kind of learning experiences that families want for their children and for all young people across the city. We feel that this process has been very productive, it’s allowed us to arrive at a formula that actually meets the needs of students within a framework. But having said that, we also understand that families and stakeholders and many school leaders still have questions and concerns about how this revised funding model will impact their schools and students when it’s actually being implemented.

JAISAL NOOR: During public comment speakers unanimously opposed passing the changes immediately. Some speakers wanted the vote delayed, others said the changes should be scrapped altogether.

MARIETTA ENGLISH: What is the rush? This is too important to rush. Why not wait to implement changes until after a resolution from the current commission and its recommendations have been made public and we’ve had an opportunity to discuss them?

C. DUNCAN EVANS: We have a lot of questions we still need to address. An important one being, did this funding policy actually lead to increased student achievement? We talk a lot about the theory of action. Is that theory of action holding up? Number two, are we requiring too of principals to be fiscal managers and instructional leaders?

Speaker 7: And we ask that you not approve the current proposal until these issues are addressed. Thank you for your time and consideration.

JAISAL NOOR: Alison Perkins-Cohen, chief of staff to the CEO, acknowledges the public discontent with the proposal, but she argued the vote could not be delayed. Perkins-Cohen promised the changes would not negatively impact schools.

A. PERKINS-COHEN: We do think that the general philosophy of funding poverty and funding concentrations of poverty does align with our values and we do want to go in that direction. But at the same time, we recognize that we don’t want any schools to be negatively impacted this fiscal year after our traditional schools really had a hard time last year because of budget cuts.

JAISAL NOOR: The board voted to pass the proposal six to one. Some high poverty schools would have their funding increased by up to 5 percent. But no schools would have funding decreased. After the vote, the school board clarified the extra money would come from additional funding from the state. Larry Hogan has already promised an additional $11.5 million to Baltimore Schools.

Public school teacher Corey Graber, who is a member of the BMORE Caucus of Educators that spoke out against the changes, criticized the school board for considering a proposal that would cut funding to schools. He praised advocates who helped push the board to adopt a proposal that would not cut funding. Graber added the changes do not address “several deeper long-term issues with any sort of fair student funding formula, specifically the disruptive nature of adjustments that lead to transfer teachers and consolidate classes in the middle of the school year, and principals spending their time being economic managers instead of instructional leaders in the building.”

The Real News will keep following this story. This is Jaisal Noor with Cameron Granadino.