Pocomoke to Attorney General: Reason for Secret Meeting is Secret 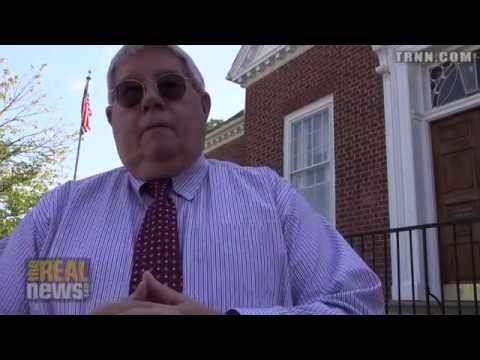 TAYA GRAHAM, TRNN: We’re here at City Hall in Pocomoke, Maryland to get comment from the mayor on recent allegations from the ACLU that the city council met in secret in order to fire Chief Kelvin Sewell.

Pocomoke Mayor Bruce Morrison has not returned our calls since the ACLU filed an Open Meetings Act complaint. Our reporting uncovered two secret council meetings held in June, when they fired the town’s first black police chief, Kelvin Sewell. Meetings held behind closed doors and without public notice that have elicited few comments for city officials until now, but continue to stoke controversy in this small Eastern Shore town that has been torn apart by the dismissal of Sewell for reasons still unknown.

VANESSA JONES: We have not really gotten an answer to this one question: was Chief Sewell incompetent in some way? Why was he fired?

GRAHAM: Shortly after we arrived we were turned away empty-handed until newly appointed City Manager Ernie Crowfoot followed us out of City Hall and agreed to talk.

GRAHAM: First he reaffirmed that city officials could not discuss Sewell’s termination.

CROFOOT: You know, under state law we can’t tell anybody that. If somebody says, why did you demote so-and-so, or how come you took this guy, he was doing a great job, he was demoted there. Why did you fire someone. We’re just not allowed.

GRAHAM: Then he told us the council could meet in secret, and that the council did not have to notify the public of when they met or what they were meeting about.

STEPHEN JANIS, TRNN: The council never gave any notice or anything. From your perspective as an expert on that, was that done properly?

CROFOOT: My perspective on that is that deciding about an employee is an administrative matter. How it comes up a lot of times, though, is you only get bodies together typically in the regular meetings. So there’s exceptions for that. So if you want to go into a closed session to discuss a personnel matter, you can. Firing or disciplining or promoting an individual isn’t a matter of any of those things. It’s a matter that [inaud.] with respect to staff, as opposed to things that the public can have input in. And to me that’s a major qualitative difference.

JANIS: But that raises a good question, because you are the person who is supposed to be doing all of that, the city manager. So why are they doing that?

CROFOOT: Look, I’ve got something going on inside.

GRAHAM: It’s an argument bolstered by this letter obtained by the Real News Network from Pocomoke attorney William Hudson to the Maryland Attorney General’s Office in response to the Open Meetings complaint filed by the ACLU. In it Hudson argues the city council can hold emergency meetings without notifying the public. Hudson also says the media was not barred from this meeting in July, even though the Real News videotaped this officer ordering us to shut off our cameras.

But most importantly, he told the attorney general the reason for the secret meetings is secret, and could not be revealed to the Attorney General’s Office. Partly because, he says, the city’s actions are subject of a current EEOC investigation. Sewell’s attorney alleged he was let go because he refused to fire two black officers who had filed EEOC complaints against Worcester County Criminal Enforcement Team, one of which has since been sustained. Those complaints were lodged against the criminal enforcement team attached to the Worcester County Sheriff’s office alleging Detective Frank Savage was subjected to racial slurs, hostile texts, and a dead deer tail placed on his car when he complained.

But beyond Hudson’s letter, specifics are hard to come by from the city. For example, the so-called anonymous phone call made by Sewell that was the focus of the first secret meeting to discuss his termination may not have been anonymous. Sources have since told us the call was actually Sewell reporting that he had received an anonymous tip about a fugitive drug dealer in Snow Hill, Maryland and he had requested officers apprehend him, which is one of the reasons Councilwoman Diane Downing says they decided not to fire Sewell after the council reviewed a recording of the call at police headquarters on June 26.

COUNCILWOMAN DIANE DOWNING: So I said, well, let’s get to the tape. Chief Sewell, do you have a tape from the March raid so we can hear what you said. And so the lady finally got the tape pulled up. We all go into that little room. I don’t know what you call it. But we all get in there. She plays the tape. Everything that Chief Sewell said he said was on the tape. I said, now, that’s evidence right there.

JONATHAN TAYLOR: Pocomoke is a small little town that really kind of is behind the times.

GRAHAM: Jonathan Taylor, publisher of the Lower Eastern Shore News says the lack of concrete information and Sewell’s apparent popularity have only fueled the controversy, and thrust the council into an uncomfortable and unaccustomed spotlight.

TAYLOR: You get a lot of people that have known each other and live int hat little town for so long that they just accept whatever anybody does because it’s their buddy or their neighbor, you know. That’s how those people get elected there. I mean, that’s how Bruce Morrison got in.

GRAHAM: A spotlight which caught the attention of the Legislative Black Caucus who sent a letter to the attorney general, calling on him to act quickly on the accusations of secrecy leveled against the council. A letter that State Delegate Jill Carter signed.

STATE DELEGATE JILL CARTER: We take an interest in what happens all across the state. And it’s a violation of the public’s rights to know what’s going on.

GRAHAM: And now the Vanguard for Justice Society, which represents black police officers throughout the state, is stepping into the fray. Board member Louis Hopson says they are calling on both Governor Hogan and the attorney general to act quickly to reinstate Sewell.

LOUIS HOPSON: They have to be, get involved. And so we’re sitting behind the fact that the action by our government hasn’t taken place yet. I’m extremely [upset behind it]. And I think that all good people should be upset behind this. You know, what’s lost in this equation, to me, is the citizens. They have a right to have free and crime-free and non-corrupt government.

GRAHAM: Meanwhile back in Pocomoke, residents continue to voice their support for Sewell.

TERRANT WILLIAMS: He was more in touch with the community. He was. He wasn’t afraid to get out here and walk down the streets and stuff. Because the chief before him, I can’t tell you who he was.

GRAHAM: But also their concern that what went on behind closed doors will never see the light of day.

MICHELLE LUCAS: Do you know that Chief Sewell is the first, the first chief I’ve ever had the pleasure to meet, because every other chief we’ve ever had stayed in the office and never made himself accessible to the community.

GRAHAM: This is Taya Graham and Stephen Janis reporting for the Real News Network in Pocomoke City, Maryland.

A Black Cop Got Drug Dealers Jobs, Law Enforcement has Pursued Him Ever Since