Who Benefits From Sovereign Debt Crises? (5/5)

The US, Canada, Germany Japan, Israel and UK voted against the resolution. Basically the political economy of it is that developed world governments feel they can ensure their banks somehow get repaid. If these governments feel that forcing an agreement on a debtor country that denies citizens’ basic needs, social and economic rights and somehow extract this debt, that this is a feasible way out, it’s not, says Jayati Ghosh

The US, Canada, Germany Japan, Israel and UK voted against the resolution. Basically the political economy of it is that developed world governments feel they can ensure their banks somehow get repaid. If these governments feel that forcing an agreement on a debtor country that denies citizens’ basic needs, social and economic rights and somehow extract this debt, that this is a feasible way out, it’s not, says Jayati Ghosh 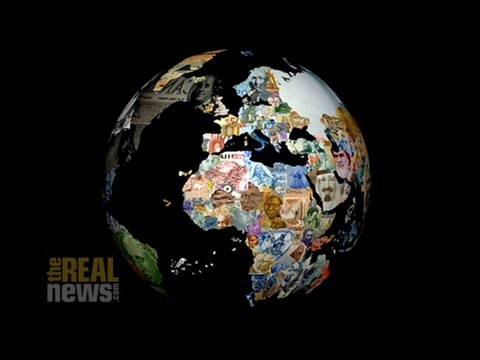 In this series we’ve reported on an historic and unprecedented move on the part of the UN General Assembly to tackle the kind of sovereign debt crises that have hit Greece, Argentina, and the Ukraine, and we’ve been having a conversation on the issue with our guest, economist Jayati Ghosh. This is the concluding segment of that conversation and report.

First, to more on the General Assembly.

FRIES: Thanks to Argentina, the UN General Assembly has approved an historic resolution today. Argentina has opened the world’s eyes. So said Bolivia’s ambassador to the UN, speaking in his capacity as president of the G77 plus China at a UN press conference in 2014 on September 9, as work on the sovereign debt issue got underway as called for in the resolution introduced by Argentina, presented by the G77, was approved.

In a related comment at a resolution work session, Joseph Stiglitz had this to say.

JOSEPH STIGLITZ: The reason that we have a bankruptcy law is that in the absence of that there can be long delays. And the outcomes are determined not on the basis of principles of fairness and efficiency but on the basis of economic weight, economic might. The party that is willing to wait to spend the most on litigation. These are not principles of social justice or even economic efficiency. And the reason we have a rule of law is to protect those who are weaker, those who in the battle would be, would lose out. That’s why we have a legal framework and an international rule of law. And ironically when I talk to some people in the private sector, they say except for Argentina the old system worked perfectly well. What they meant was, we could beat up on almost all the countries and get our way. And it was only because Argentina was willing to stand up and say we want a fair negotiation that Argentina was the problem.

FRIES: We now continue to part five, the concluding segment of our conversation, with our guest, economist Jayati Ghosh. Jayati Ghosh is a professor of economics, and chair of the Center for Economic Studies at Jawarharlal Nehru University in New Delhi. Welcome.

GHOSH: What really happened, what the Argentine case shows very clearly, is that the bona fide creditors and those who actually accepted the reduction in the debt, which was a very reasonable, plausible reduction, they are the ones who suffer. Because even they are not being allowed to be repaid by the US courts and by the US banks because of this peculiar, complicated system of jurisdiction.

So a few holdout creditors or a few holdout vulture funds can actually disrupt an entire system of debt and repayment because of their own interest. And this is not just disruptive of a particular case, it’s disruptive of the entire sovereign debt market.

FRIES: Talk more about the global and systemic implications of all this.

GHOSH: I think more and more people across the world and more and more countries across the world are realizing that you cannot have a properly functioning global financial system without this kind of debt workout mechanism. And this was the driving force behind the UN General Assembly resolution on this matter, which was of course led specifically by the case of Argentina. As you know, Argentina managed to restructure its debt with the support of 80 percent of its creditors. There were a few holdout creditors, those who didn’t agree.

Now, if you had a proper sovereign debt mechanism with collective action clauses it wouldn’t matter. They would also have been forced to agree. But these holdout creditors then sold their assets, their distressed assets, to what are called vulture funds. Vulture funds are companies that buy these really cheap, distressed assets and then somehow try and get the maximum gain from them. These vulture funds have been pursuing the case in various courts all over the world, including in the U.S. court. A U.S. district court, and subsequently the U.S. Supreme Court, have basically said that Argentina must pay those vulture funds the full value of the debt, even though they probably bought it at one-hundredth of the price. But they have to repay the full value of that debt, even when they have not paid that to the 80 percent of the creditors and they have themselves, when they did that restructuring, taken the position that they will not pay any other creditor more.

So Argentina’s in a complete bind. It cannot pay those holdout creditors or the vulture funds the full amount, because it has already promised the earlier creditors it would not do so. Yet now the U.S. courts are saying if you don’t do that we will freeze your assets here, we will not allow you to repay your other creditors. I mean, it’s completely bizarre what has happened.

Now, it’s that kind of ridiculous anomaly which really has to be fought and which would be clarified if we had a proper sovereign debt mechanism functioning globally. And so, in fact, there was a UN General Assembly move which, I’m very happy to say, won with a very large majority. But it’s interesting to see the countries that did not vote for it. They were mostly the developed countries. The United States, which originally President Obama had actually said yes, a debt workout mechanism is necessary. The United States voted against. The major European countries voted against.

So essentially, the developed world voted against because they feel that they’re in a position to ensure that their banks somehow get repaid at the cost of all the debtor nations. I think that’s the political economy of it. But it’s a very short-sighted political economy. Because in fact, if these governments feel that being able to by force push down a certain agreement on a debtor country, grind it into the dust, deny its citizens basic needs and all of their social and economic rights, force them into poverty and penury and somehow extract this debt, that this is a feasible way out, it’s not.

FRIES: To wrap up, what problem can a sovereign debt workout mechanism resolve?

GHOSH: Sovereign debt workout mechanism is something you do when there is a debt crisis, when there is a solvency problem, when there is a real problem of an inability to repay and a need to restructure the debt. We need to have a transparent, clear, systematic way of doing that. Because otherwise, now you are getting these really, really messy crises, which are not just messy. They’re extraordinarily painful and damaging to the citizens of the country involved. So we really have to think of a way in which we work out how to deal with the crisis. But of course that’s not enough. What we also need is a way of reducing the possibility of getting into these crises and ensuring stable, sustainable forms of external finance.

So in a way, you can’t separate this issue of the sovereign debt crisis with the fact that governments are now either forced to or willing to take on extremely unstable sources of external finance. And we should really try and reduce that. Reduce the reliance of governments on sources of finance that will be difficult to repay and can create huge potential for crisis in the future.

FRIES: So are you saying that there’s this increased risk of probability of debt crisis for any economy or government that’s seeking financing, so that’s a de facto structural impediment on the path to economic development?

GHOSH: Yes, the system we have today is actually one that either inhibits governments from seeking finance which is short-term in nature when they have long-term investments, or which will necessarily involve them in crises.

FRIES: And what about when G7 nations were developing countries?

GHOSH: The G7 nations are classic examples of countries that have benefited from very positive historical contexts, and from specific institutional conditions which they are unwilling to give now to developing countries. Or even giving, unwilling to give to some of their own.

We’ve talked about how Germany benefited from debt agreements and debt renegotiations that were dramatically more generous than what it is willing to offer Greece today. But as I mentioned the United States was a huge beneficiary of long-term sustained capital inflows through the bond market, which enabled the entire expansion of the U.S. railway system, the expansion of the U.S. power industry, the development of a whole range of other manufacturing industries. None of this would have been possible without that very long-term sustained foreign investment, and particularly foreign bonds.

Now, this kind of stable, sustained investment is what developing countries need today. And that’s what’s being denied to them.

FRIES: And a concluding thought?

GHOSH: A lot of sovereign debt crises are not because governments took on too much debt, or governments were profligate. A lot of them are because when private sector takes on too much debt and they can’t repay, then the government is forced to come in and take over those bad debts. That’s what happened in Ireland, that’s what happened in Spain. And then it’s the government that is left holding this baby, and somehow having to deal with the debt crisis which was really created by private investors.

A sovereign debt mechanism requires governments to be able to access long-term finance in a sustainable way, but it also requires financial regulation so that private players cannot behave irresponsibly and then leave the mess for the government and the citizens of the country to clean up.

FRIES: We’ll have to leave it there. This concludes our series. Jayati Ghosh, thank you.