Who Benefits From Sovereign Debt Crises? (3/5)

Since the early 1980s Latin American debt crisis, we’ve advocated for clear, consistent, fair rules that allow countries with excess debt to work through that problem in a way that doesn’t damage their people and economy says UNCTAD’s Richard Kozul-Wright

Since the early 1980s Latin American debt crisis, we’ve advocated for clear, consistent, fair rules that allow countries with excess debt to work through that problem in a way that doesn’t damage their people and economy says UNCTAD’s Richard Kozul-Wright 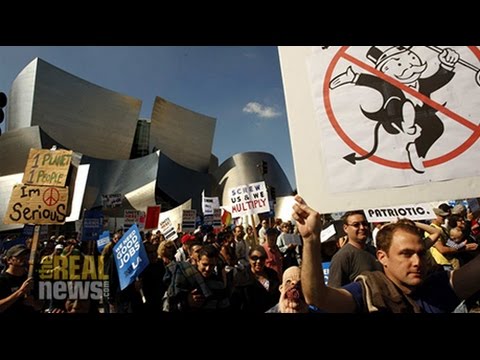 In part one of this series we reported that a principled approach to sovereign debt restructuring is now backed by the political weight of a UN General Assembly resolution, and we opened a conversation on the issue with our guest, economist Jayati Ghosh. In this segment as we continue that report and conversation, we go first to a press conference on the resolution and a clip with economist Richard Kozul Wright of UNCTAD.

RICHARD KOZUL WRIGHT, UNCTAD DIRECTOR, DIVISION OF GLOBALIZATION AND DEVELOPMENT: It’s a very funny world, and Professor Stiglitz made this point this morning, in which it is recognized that functioning market economies need bankruptcy rules because debt is an inherent part of the workings of modern economies and often people face the challenge of being unable to pay debt, and the set of rules and practices and institutions that have been fashioned at the national level to ensure that as people try to get out of debt the situation doesn’t get worse and the problem can be managed. Yet at the international level where we have also high levels of indebtedness there is no equivalent of national bankruptcy laws. And it’s a major gap in the international system.

And UNCTAD, ever since the Latin American debt crisis of the early 1980s, has been advocating very strongly for some kind of equivalent at the international level to clear, consistent, fair rules that allow countries that find themselves in problems of excessive debt to work through that problem in a way that does not excessively damage their people and their prospects for future growth.

As a European citizen, I can only watch what happens in Greece in horror, really, that in the early 21st century that this is the kind of treatment that democratically elected governments are being subject to. Whatever you think the cause is of the Greek crisis, or the Ukraine, or the Puerto Rican crisis, there is little doubt that this is not the way to deal with this kind–something is missing from the system when 25 percent drops in output, 50 percent levels of unemployment amongst youth, increasing suicide rates, declining health figures, et cetera, are the consequence of trying to deal with–something is clearly wrong. And we strongly believe the kind of approach that we have in the roadmap and guide and now in the context of the committee offers a more, a fairer, and a more transparent and a more efficient way to get out of these kinds of problems.

FRIES: We now continue to part three of our conversation with our guest, economist Jayati Ghosh. Jayati Ghosh is a professor of economics, and chair of the Center for Economic Studies at Jawarharlal Nehru University in New Delhi. Welcome.

FRIES: In part two you talked about situations where a nation is basically bankrupt. The debt’s become so large it can never be repaid. And the only way to deal with it is to restructure it. Tell us about that.

Also, remember that when creditors lend you money in a sense they are already incorporating that risk. Because certain debtors have to pay higher interest than others, and this is also true in the sovereign debt market. When Argentina borrows it has to pay a much higher interest rate than when Germany borrows, or within Europe when Germany borrows it pays a very low interest rate compared to what France pays, or what Spain pays. What Italy pays. Why is that? That’s because the creditor thinks there is a possibility that I won’t get this money back. There’s a risk. And I’m going to, in a sense, incorporate that risk in the interest that I charge. So already the credit contract is incorporating that possibility of default.

Now, when you have that it is bizarre that you don’t actually have a system of the actual default. We have it for everything else. We don’t have it for sovereign debt.

FRIES: So in other words, when a nation defaults and has to go to the negotiating table, they’re basically left to fend for themselves. There’s no international equivalent of what kicks in for, say, a corporation, or a municipality in the U.S., like Chapter 11, Chapter 9.

GHOSH: Well, that’s the problem, really, is that the issue with sovereign debt is that you are dealing with a global system where we don’t have a global architecture for this. And the idea of having a sovereign debt workout mechanism is to make sure you do get a global architecture, because when governments borrow in other currencies, if they have a problem there has to be a method of dealing with it. It’s completely crazy to have just a messy, chaotic breakdown of a system where creditors can afford to grind the debtors into dust, or where the creditors feel that they’ve been badly done because they’re not getting repaid.

Either way, it makes no sense. You must have a transparent, clear mechanism of enabling default, enabling bad debt to be restructured in a way where you can actually pay it eventually, over time. And allowing for the fact that creditors also must bear some of that burden. Because just as debtors may have borrowed and not used the money properly, creditors may have lent irresponsibly. So they need to bear equal responsibility.

FRIES: Let’s break here and take that up in part four of our conversation. Please join us as we continue our series in the next segment. Jayati Ghosh, thank you.