Who Benefits From Sovereign Debt Crises? (1/5)

You would not ask Citibank to design the bankruptcy law in the US. We know how it would design the law. It would have indentured servitude. Bankruptcy laws that come out of creditors are neither fair nor efficient argues Joseph Stiglitz.

You would not ask Citibank to design the bankruptcy law in the US. We know how it would design the law. It would have indentured servitude. Bankruptcy laws that come out of creditors are neither fair nor efficient argues Joseph Stiglitz. 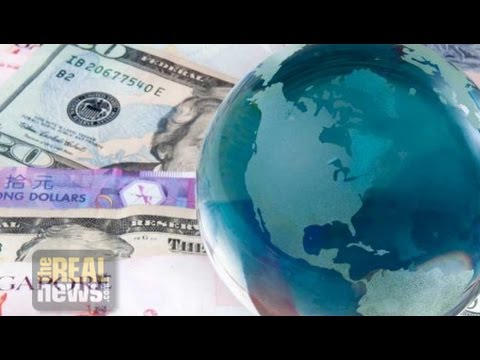 Most credit systems everywhere allow for the possibility of non-payment. The possibility of default. Bankruptcy. Not so the international system for sovereign debt. So explains economist Jayati Ghosh. Country by country, decade by decade, elected governments hit by sovereign debt crises like those in Greece, Argentina, the Ukraine, have found out what this gap in the international system means for their economy, for their people. One country, Argentina, brought their case to the UN General Assembly in a resolution calling on member states to address the issue. Backed by majority vote from start to finish the resolution is now in effect.

In this series, to look into what all this means, we report on the resolution process in action, and we invite economist Jayati Ghosh to join us and ask her to explain the issue. We go first to the UN General Assembly. Here is a clip.

JOSEPH STIGLITZ, COLUMBIA PROF. AND NOBEL LAUREATE IN ECONOMICS: Well, thank you very much for giving me this opportunity to address you. Five, six years ago I was appointed by the president of the General Assembly to head a commission of experts to look at the global financial system and the aftermath of the global financial crisis. We looked at a number of issues that had contributed to the crisis. But one of the things that we emphasized in the fourth chapter of our report was the need for creating a framework for dealing with sovereign debt. Unfortunately, progress was very slow. Actually zero.

FRIES: The 2009 initiative Joseph Stiglitz referred to met with opposition. Here is a clip from the floor of the UN General Assembly at the time.

U.S. REPRESENTATIVE (UNIDENTIFIED): In order to be useful and productive, the working group process called for in Paragraph 54 must be based on the strengths of the United Nations which lie in its broad development mandate and large field presence. Our strong view is that the UN does not have the expertise or the mandate to serve as a forum for meaningful dialog or to provide direction on issues such as reserve systems, the international financial institutions, and the international financial architecture. Mr. President, thank you very much.

FRIES: The report Joseph Stiglitz talked talked about in the General Assembly in July 2015 and its nine principles in which new regulatory mechanisms could be built to tackle sovereign debt crises was the outcome of a transparent and participatory working process that formed the resolution that would be put to vote two months later in September. A process originating in 2014 by majority vote September 9. The General Assembly technical arm on debt issues, UNCTAD, supported the working process. Declaring the right and responsibility to do so under UN Charter, a majority of member states participated in the process.

FRIES: In a press conference following the work session, the resolution committee chair expressed confidence that when put to final vote the resolution would be approved. The fact that 11 countries that voted against moving forward with the resolution in 2014 represented around 40 percent of the votes at the IMF but less than 7 percent at the General Assembly was commented on as the true reason they did not want this issue to be debated at the UN.

Now back to the working session earlier in the day with Joseph Stiglitz. We pick up where we left off.

STIGLITZ: I very much welcome the efforts of your committee to address this issue, and I have to congratulate you on the set of principles that you’ve come forward with, which I think are a excellent set of principles, which I would have hoped would have gotten unanimous support of the General Assembly. But I realize in this world you don’t always get unanimity even when you should. I just came back a little while ago from Addis Ababa for the meeting for financing for development, the third meeting. The first meeting was convened with the principle that development was too important to be left to just finance ministers. And I very strongly supported that view. And I think in the three meetings of the finance for development in Monterrey and Doha and now in Addis, it’s become increasingly clear why it is so important to have the UN engaged in this issue of finance for development.

One of the important sources of finance, of course, is debt finance. But the debt market for developing countries is very seriously impaired because there is not an adequate way of dealing with those situations which happen, unfortunately too often, but do happen even in the best of well-functioning markets, where countries become excessively indebted. And there is a need for a fresh start. There’s a need for a restructuring of the debts. The UN is the right place for that discussion to occur. It’s not the IMF. The IMF is an institution of creditors. And you would not ask Citibank to design the bankruptcy law in the United States. We know how it would design the law. It would have indentured servitude. Most of us think that indentured servitude is not the answer. Or debtor prisons. We need a fair bankruptcy law, and I will go further. An efficient bankruptcy law. And the bankruptcy laws that come out of creditors are neither fair nor efficient.

The only place where one can have all those, creditors and debtors at the table, is the UN. And so that’s why this is the right place for these discussions to go on. And your report, the balanced nature of your report, provides testimony to the fact that you are the right place, and I think you have done an excellent job.

FRIES: We now turn to our own conversation with our guest, economist Jayati Ghosh. Jayati Ghosh is a professor of economics, and chair of the Center for Economic Studies at Jawarharlal Nehru University in New Delhi. Welcome, Jayati, thank you for joining us.

FRIES: Let’s start with the question of why countries borrow from foreigners in the first place.

GHOSH: Well you know, countries borrow for many reasons. But basically countries borrow, particularly developing countries borrow, because they need the extra capital for their growth. For investment. Because typically poor countries save less, and if you save less you’re able to invest less. And that in turn means that you have lower rates of growth and lower development over time.

Now, this is a very, very old practice. If you think about it the United States would not be a developed economy if throughout the 19th century it had not been able to borrow vast sums, mostly from England but largely from Europe. So in fact the United States ran current account deficits between 5-7 percent of GDP for nearly 70 years. And this is what really enabled it to become the industrial power that we saw before the first world war.

FRIES: So running a current account deficit meant that these countries were importing more than they exported. What else did it mean?

GHOSH: Basically that they needed to finance those additional imports. And you need foreign currency in that sense to finance it because you have to pay for your imports. And so one way of doing that is to get capital in, and a very common way of getting the capital in is to borrow the additional capital that you need for your investment. So countries typically go through what is called a debt cycle. That is, that in a certain phase of development you need to borrow more, and in this period you have current account deficits but you are paying for them with this capital inflow, with this borrowing. At some point when your income rises enough you are able to start to repay, and that’s when you can start running current account surpluses, when you can export more than you import and use those proceeds to repay your debt. This is a very standard debt cycle.

Now, countries get into problems repaying because often they cannot complete that debt cycle. Either the lending stops before they’re able to actually repay, or it turns out they’ve used the money for wrong things, not for investment. Or things beyond their control happen. I mean, there could be an economic shock, there could be some major external disaster that affects them, or it could be even global economic conditions that change. So when countries experience difficulties in debt it’s usually one of these three reasons that is responsible.

FRIES: And what about the currency issue?

GHOSH: I’ve been talking so far about countries. But you know, it’s slightly different with governments. Because the main problem here for governments is that when they borrow in other currencies. If they borrow in their own currency there’s no problem, really. I mean, the United States government can always repay its dollar debt because it issues dollars. The central bank can issue more dollars. When you borrow in another currency you have to make sure you have enough of that currency to repay.

FRIES: And over time has something else come into the mix?

GHOSH: I think one of the things that has happened now is the debt cycles have got shorter and shorter. And I talked about a phase where you can keep borrowing, and then the phase where you have to repay. I mentioned that the United States had been borrowing for 50-70 years. It’s impossible to imagine that now. In fact, after about 5-6 years, at most a decade, creditors will start demanding their money back. And this is a problem if the investments you’ve made are longer-term. So supposing you borrowed money in, let’s say, the sixth or seventh year for an investment that is only going to fructify ten years from now. You will not have got enough to start repaying. Or it can happen that people borrow, or countries borrow, and the money that is used is not really used for investment. It goes into consumption, it goes into government spending, in ways that do not increase the national income over time.

In either of these situations you may end up with a debt crisis. But in today’s world what typically happens is that the debt crisis occurs because investors suddenly start feeling fearful, and they pull out. So it creates, if you like, a premature collapse of the economy.

FRIES: Let’s talk more about that in part two of our conversation. Please join us as we continue our series in the next segment. Jayati Ghosh, thank you.