Gareth Porter: Top military and intelligence officials in 2010 told Netanyahu they could not launch a strike against Iran

Gareth Porter: Top military and intelligence officials in 2010 told Netanyahu they could not launch a strike against Iran 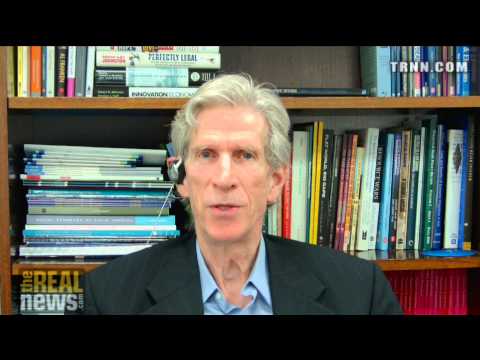 PAUL JAY, SENIOR EDITOR, TRNN: Welcome to The Real News Network. I’m Paul Jay in Baltimore. And welcome to this week’s edition of The Porter Report with investigative journalist Gareth Porter. Gareth is the winner, or recipient, I guess you could say, of the Gellhorn Prize for Journalism this year. He writes for IPS, and he’s a regular contributor to The Real News. Thanks for joining us again, Gareth.

PORTER: Well, this week I did a story on what happened in Israel in 2010 that gives us some really very important new insights into the political dynamics surrounding the Netanyahu government’s policy toward Iran, because the story that came out of Israel this past week is one of a confrontation, really, between Netanyahu and his two leading national security advisers or officialsâ€”the head of Mossad, Meir Dagan, and the chief of the Israeli Defense Forces, Gabi Ashkenazi.

And the issue was that basically Netanyahu ordered them, ordered the IDF in particular, to put the Israeli Defense Forces on the highest level of alert possible. And both Ashkenazi and Dagan said, no, what are you talking about, we can’t do that; don’t you understand that that would basically risk war by miscalculation, that the Iranians would get wind of it and very possibly decide that they needed to preempt an Israeli attack? And so, basically, Netanyahu and Defense Minister Ehud Barak backed down.

And so this is the biggest insight we’ve had into what’s really going on there and what caused particularly Meir Dagan to break openly with Netanyahu last year to continue to criticize very [incompr.]

JAY: So how do we know all of this? It would seem to me such a division that the top levels or most senior levels of the Israeli government would be top secret. How does this story get out?

PORTER: Well, you’re right. It obviously involves some of the most sensitive information that one could possibly obtain about high-level decisions within the Israeli government on matters of national security. And the reason that this came out is that the military and intelligence head at that time, that is, Gabi Ashkenazi and Meir Dagan, went to Channel 2 in Israel, and they have an investigative program called Truth, and the two key individuals, who are no longer in the government, of course, spilled the beans, took their storyâ€”their side of the story, at leastâ€”to Channel 2. And that’s how they got the story. And they then went to Ehud Barak and Prime Minister Netanyahu to get the other side. And, of course, it was Barak who responded rather than Netanyahu

JAY: And Barak says something also rather revealingâ€”it’s kind of amazing, actuallyâ€”that one of the things that Barak and Netanyahu were told by these military intelligence leaders was that they couldn’t launch the attack even if they wanted to. They didn’t have the capability for it.

PORTER: Well, that’s right. This was one of the things that came out in the program and which Ehud Barak certainly made no effort to deny, that that was indeed exactly what he was told, that there was no military option in 2010, that it simply wasn’t feasible, it wasn’t realistic. That doesn’t mean that they couldn’t have launched airplanes against targets in Iran. It means that they couldn’t have been successful. It meant that they were telling him that we don’t really have the capability to do this in a way that makes any sense. And so that’s one of the parts of this story that really, I think, is very significant that has not been played up at all in the news media, even though if you go far enough down in some of the stories it’s there.

JAY: And Ashkenazi tells Mullen and the American brass that in fact they can’t do this, that all this rhetoric of Netanyahu about being posed for a military strike is just empty words ’cause there isn’t the capacity.

PORTER: That’s right. And this was another story that was published earlier this year, which has not gotten any play in the global news media, although it was an important story in the Israeli newspapers.

But this again underlines the point that the way in which the news media, the major newspapers in the United States and in Europe, and the, of course, television media have been covering this issue has emphasized the whole idea that Netanyahu is definitely committed to attacking Iran, he’s threatening to do so, this is still very much a live issue, and that’s the way in which this should be understood.

JAY: Well, before we get into that point, I just want to back up to one other point. Doesn’t it seem completely bizarre that the minister of defense and the prime minister don’t already know the military capacity of their own military, when all they’reâ€”you know, they’re talking and talking about attacking Iran, they haven’t bothered to ask, can we do it? This whole thing seems [crosstalk]

PORTER: No, no. This was, clearly, well known to Prime Minister Netanyahu and Defense Minister Barak well before this. It’s not like they were suddenly told this and it was a surprise. This was something that had been discussed for years and years. I mean, if you go back and look at what had already come out in the WikiLeaks documents, there was a document from 2005, late 2005, early 2006, which indicated that Israeli officials were admitting to American counterparts that there was no military option. It was considered to beâ€”.

PORTER: Well, this is another twist in the story, of course. Barak is now trying to blame Gabi Ashkenazi for having failed to actually have an adequate military option, whereas in fact the reality was for years that the Israeli army, the Israeli air force, to be specific, lacked the refueling capacity and other elements that they would have to have in order to have a credible threat to attack Iran.

JAY: Now, do we know now, you know, essentially two years later and change, has anything changed? I mean, do they have any more capability now than they did then?

PORTER: Apparently not. The Israeli press has pointed out that nothing really has changed, as they were told by officials in connection with this story. So this is still the same story that it has been for at least the last seven years.

JAY: So this kind of lends more credence to what you and I have been saying in previous interviews, that a lot of this talk about threatening war with Iran is actually kind of a good cop, bad cop routine in order to make terrible, I mean, killer sanctions. How many times did Barack Obama and Biden talk about killer sanctions against Iran, to make that look somehow more benign and diplomatic?

PORTER: Well, it’s not just to make that more benign and diplomatic; it’s also that Netanyahu, and with the support, as you’ve suggested, of the Obama administration, used the idea that Israel might have to carry out an attack against Iran in order to put pressure on the Chinese in particular to get them to go along with sanctions, going back as early as 2009. I don’t think it made any difference. I don’t think the Chinese really believed it. But that was one of the reasons why they felt that this was such a good idea, to get this idea out there that the prime minister of Israel is really quite serious about the necessity, ultimately, to use military force if nothing was done to stop the Iranian nuclear program.

JAY: It sounds like perhaps the only people that really are taking all this really seriously are the American media.

PORTER: Well, it’s certainly the news media. It’s not just the American media. But it’s the global news media. The wire servicesâ€”AFP, Reutersâ€”are just as bad or worse in their coverage of this issue than American newspapers and television.

JAY: Yeah. And the reason this is important is nobody in the global mediaâ€”I shouldn’t say nobody, but nobody I’ve seenâ€”is really focusing on just how destructive these sanctions are to ordinary people in Iran.

PORTER: That’s right. And, of course, in my viewâ€”and I’m sure you would agree with thisâ€”the whole media theme of the imminent threatâ€”or the looming threat, I should say, of an Israeli attack on Iran has been a way of really distracting attention from the issue of what really should be done to use diplomacy on this issue.

And instead, of course, as you said, we’ve got these sanctions which are extremelyâ€”falling, obviously, on the people of Iran. They’re not really falling on the leadership, as the theories are supposed to have it, but rather simply causing human suffering. And that may well have some difference, make some difference on the Iranian diplomatic position.

But the primary reality is that the Iranians have been trying for well over a year now to get the United States to agree to make a deal which would limit very significantly the level of uranium enrichment by Iran, and other limits on the Iranian nuclear program, in return for very serious relief from sanctions, and of course primarily the sanctions on the oil exports which are so important to the Iranian economy.

JAY: Which they can’t get. Thanks very much for joining us, Gareth.

JAY: And thank you for joining us on The Real News Network. And if you would like to see more reports like this, don’t forget the Donate button, ’cause if you don’t click it, we can’t do this.