Will the US Negotiate State to State with Iran?

Gareth Porter: The US has rebuffed several attempts by Iran to negotiate a resolution to the standoff, Obama appears committed to harsh sanctions

Gareth Porter: The US has rebuffed several attempts by Iran to negotiate a resolution to the standoff, Obama appears committed to harsh sanctions 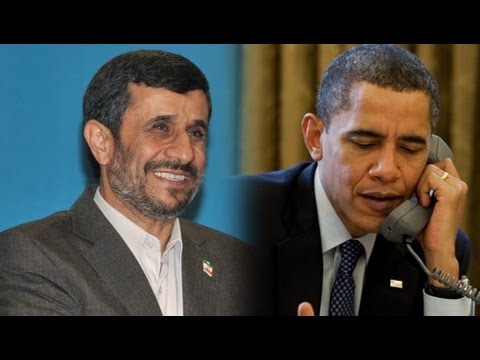 PAUL JAY, SENIOR EDITOR, TRNN: Welcome to The Real News Network. I’m Paul Jay in Baltimore. And welcome to this week’s edition of The Porter Report with investigative journalist Gareth Porter. Thanks very much for joining us again, Gareth.

GARETH PORTER, INVESTIGATIVE JOURNALIST: Hello, Paul. Glad to be back. Thank you.

JAY: So in terms of Iran, the last couple of weeks, during the debates, President Obama said in response to a question, which was, is there really going to be direct U.S.-Iran negotiations, which somebody seems to have leaked to the press, ’cause it made it into most of the major newspapers, I think, he said, well, there’s no such thing going on. So what did you make of all that?

PORTER: Well, first of all, you know, this is one of those stories where there are nuances that are very easily missed as the story gets retold from the original story. In this case, it was The New York Times that had the report that there had been agreement, which the original story did not qualify further, between Iran and the United States, to hold face-to-face talks, one-on-one talks for the first time. There had been, of course, talks between the United States and Iran in the context of the P5+1, the permanent five members of the UN Security Council plus Germany on one side and Iran on the other side, but there had not been really substantive meeting between the United States and Iran, just the two of them previously. So this would be a pretty significant breakthrough in terms of its implications.

But what happened then was that the United States government issued a denial that was not really a denial. In other words, what they said was that the United States and Iran have not agreed to talks before or after the elections. And so that was a denial that there had been an agreement, or certainly could be construed as a denial that there had been agreement on a specific meeting on a specific date, or even an approximate date, whereas it left open the possibility, of course, that they had agreed in principle that they would talk, but they would, you know, get back together to reach agreement on [crosstalk]

JAY: But what do you make of it? The New York Times is usually the White House’sâ€”what is it?â€”leaker of record.

PORTER: Well, it’s the leaker of preference, I think, over and over again. And certainly in this case, someone in the White House or the State Department was willing to talk off the record and say, yeah, we’ve got something going here, we think we can in fact have face-to-face talks because of our contacts with the Iranians.

Now, it’s been speculated that this was being done by somebody who was hostile to the idea of talks, with the hope that it could be sabotaged, that it could be discouraged by leaking it just before an election. I’m a little bit skeptical about that, frankly, for the primary reason being that I’m not sure that this was something that the White House would have been, you know, afraid of, on the grounds that the electorate would be averse to the news that the United States and Iran were talking. I mean, after all, it’s understood by most people in this country that there have to be negotiations to end the standoff on Iran’s nuclear program, and I think the polling data shows that most people support that and that this was not regarded as particularly a negative story. But I thinkâ€”.

JAY: Yeah. What most people don’t know is that there’s been various opportunities to have these kind of negotiations in the past, and the United States has not been so interested.

JAY: And there’s also the development that the Iranians now, theâ€”I guess, the IAEA isâ€”came to this conclusion. But it actually had transitioned a lot of their 20Â percent enriched uranium into medical use. And even the Israeli authorities nowâ€”Defense Minister Barak said this isâ€”clearly there’s not as short a window before there’s a nuclear-weapons capacity, assuming there even is a desire for them to have one, ’cause we keep saying in these interviews over and over again there’s still no evidence that they have any plans to build a bomb. But that shift also seems to have happened.

PORTER: Right. I mean, and that shift is significant because it telegraphs, as I’ve said before, the Iranian desire to negotiate precisely on this issue of the 20Â percent enrichment. It means that they’re not rushing to try to get as much 20Â percent enriched uranium as they can as fast as they can, contrary to the hard right wing position on this, but rather that the Iranians really simply want to make a deal, and they see the 20Â percent enriched uranium as their primary negotiating cards, their negotiating chips, if you will. And without that 20Â percent enrichment, should they give that up without getting anything in return for the United States of substance, then of course they’re really out of luck, because the United States will not feel the necessity to really negotiate hard with the Iranians andâ€”.

JAY: And just quickly give us a recap. There’s been several opportunities to have these kind of direct negotiations that haven’t gone anywhere, just three important ones we know of. Just give us a quick recap of those.

PORTER: Well, of course, you know, [if] you go back to the period before the Obama administration, during the Bush administration you had a situation in which the European threeâ€”the U.K., the Germans, and the Frenchâ€”were negotiating with Iran on the nuclear program, and it was at that point that the Iranians really offered a deal that was quite favorable, from the present perspective of anybody on the Western side, which was to limit the number of centrifuges to 3,000, which would have been well short of what would have been really necessary for a weapons-grade uranium enrichment, ultimately. You know, it certainly telegraphed their desire to have a program that was well short of what is needed for a weapons program. So that was turned down by the Europeans flat, because they said the United States does not want a single centrifuge to be spinning. And that, of course, was the position of the Bush administration. So that was the biggest opportunity that we passed up.

Before that, of course, there was the 2003 offer by the Khatami government, which was to negotiate not only on the nuclear program but on a full range of issues separating the United States and Iran. And there were a number of things in that, including the willingness to reachâ€”to make an accommodation on the issue of Israel that were quite surprising. And, again, the Bush administration refused to even respond to that, so that went nowhere.

JAY: Yeah. We know from interviews we’ve done with Larry Wilkerson, who was in the State Department at that time and saw all thisâ€”and this essentially was closed down by Cheney, who didn’t want these kinds of negotiations.

PORTER: Right. And then I would point to previous experiences, one of which I just actually wrote about this week, where the Khatami government, and the Rafsanjani government before it, made efforts to try to soften the hostility on the part of the United States. And, actually, there were more than two efforts, but I would just mention a couple of them.

The one that I wrote about that the Khatami government made in 1998 was an invitation to U.S. nuclear scientists to form a delegation to go to Iran to examine the nuclear program there to talk to whomever they wanted, to go wherever they wanted to go and ask whatever question they wanted to ask. And this was a request that was thenâ€”there was an organized effort by Dr.Â Behrad Nakhai, a nuclear scientist at Oak Ridge National Laboratory, an Iranian, who had contacts with a number of prominent nuclear scientists. He got them interested. They were working on forming a delegation. He was offering to include a nuclear weapons specialist or more than one nuclear weapons specialist. He was offering to let the Pentagon actually name someone that they wanted on the delegation. But the Pentagon vetoed it. They said, no, we’re not interested; we think you’d be deceived, and therefore we won’t let this go forward. And, of course, the nuclear scientist needed clearances, which only the U.S. government could give them, and that was the death knell for this initiative.

PORTER: But the importance of it is that it could have in fact led to, you know, much more willingness on the part ofâ€”or much moreâ€”politically more favorable context in which to hold talks eventually. And that was passed up, obviously, particularly by the Pentagon at that point. Before that, there was another effort by Rafsanjani to open up with the United States by releasing U.S. hostages, and I’ve written about that as well. Robert M. Gates sabotaged it in 1991, ’92.

JAY: Okay, just quickly, before we go, you’re about to start a new book, and just quickly tell usâ€”I believe you’re raising funds for the book on Kickstarter. People can go to Kickstarter.com, search for Gareth Porter, and you’ll findâ€”just really fast, the book is about this, isn’t it, more or less?

PORTER: Exactly. I’m working on a bookâ€”plan to work on a book, haven’t started yetâ€”called Manufactured Crisis: The Secret History of the Iran Nuclear Scare. And the book will have a number of important revelations, some of which I’ve talked about on this show, but most of which will be new to people. And indeed we are trying to raise the money to cover my work on it through Kickstarter, and people can find the proposal by searching under my name there.

JAY: Alright. That’s great. Thanks for joining us, Gareth.