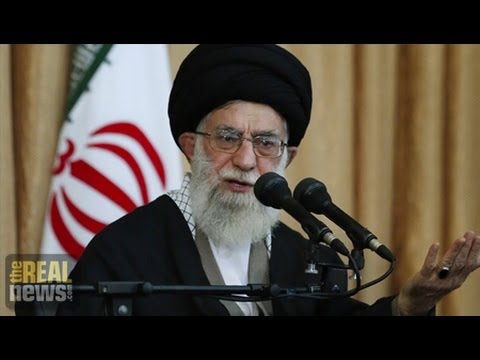 JESSICA DESVARIEUX, TRNN PRODUCER: Welcome to The Real News Network. I’m Jessica Desvarieux in Baltimore. And welcome to this edition of The Porter Report.

Now joining us is Gareth Porter. He is a historian and investigative journalist on U.S. foreign and military policy. He is the author of many books, including his latest, Manufactured Crisis: The Untold Story of the Iran Nuclear Scare.

GARETH PORTER, INVESTIGATIVE JOURNALIST: Thanks very much for having me again, Jessica. Good to be back.

DESVARIEUX: Great. So let’s just get right into it. What are you actually working on? What’s your latest piece about?

PORTER: Well, this past week I published a piece that was a refutation of a regular column by the Washington Post so-called “Fact Checker”, Glenn Kessler, which was his piece on the idea that the Obama administration has been remiss or has gone too far in expressing at least the acceptance of the seriousness of the antinuclear fatwa issued by the supreme leader of Iran, Ali Khamenei. And Kessler essentially relied almost entirely upon one source for his view of this issue, which was a researcher at the Washington Institute for Near East Policy, which is, of course, clearly dedicated to the interests of Israel and therefore not precisely an objective source on the question of the antinuclear fatwa of the Iranian supreme leader.

And this was a particularly striking example of how the news media in general and The Washington Post in particular is slanting its coverage of the Iran nuclear issue to the extreme. What Kessler did in this column, which was published November 27, was essentially to make three arguments against the serious–or taking seriously the antinuclear fatwa by the supreme leader of Iran.

First, he basically said that the previous supreme leader had issued a fatwa with regard to various subjects, that is, the supreme leader before Khamenei, who was Ayatollah Khomeini, had issued a number of fatwa, and that those fatwas were, shall we say, not very steady in their presentation. They were all over the place, that he was basically making judgments on the fly and in ways which did not essentially give much credibility to the whole process of issuing fatwas in the Iranian regime.

And what I showed in my piece was that if you look at one of the cases which was cited, which was the case of whether sturgeon fish are halal, meaning accepted, or haraam, meaning forbidden in Islam–and essentially he’s linked to a case study that showed that in fact there were some technical issues surrounding sturgeon which had to be sorted out and that this did not prove his point at all.

So what I showed in my refutation was that in fact the present supreme leader was not lying when he linked his antinuclear fatwa to the fatwa against chemical weapons, because it was not the case that the Iranians admitted to having produced chemical weapons after the war as Glenn Kessler argued–asserted. And he made that argument again on the basis of being told that essentially by pro-Israeli sources. And–pro-Israeli source. And he did not look at the original document, which was the Iranian presentation to the Chemical Weapons Convention in 1998. And I linked to that original document, and it showed that in fact Iran never admitted that it produced chemical weapons. Quite the contrary. The Iranian government said explicitly that they had prepared the capability to produce those weapons, i.e. they had produced the chemical agents, as they are called, but they never weaponized them. And that was quite explicit.

So essentially I showed that Kessler didn’t do his homework, he did not check the facts as he’s supposed to do as a fact checker, and that in fact his coverage of the issue was extremely slanted.

DESVARIEUX: Gareth, just really quickly, did he actually offer up a correction?

PORTER: Well, that’s interesting. Some days after my blog appeared refuting his column, he did in fact have what he called an update of the original column. And it was online, of course. And it was–in the middle of the column there was an update, one paragraph, a couple of sentences, which said that I had refuted or I had answered his column and suggested that it was wrong. He said he admitted that he should have linked to the original document, as I mentioned, but he was a little bit vague about whether he had actually misled his readers in saying that the Iranians had never admitted to having had chemical weapons. And so I’m afraid that the overall effect of his update was to leave the issue a little bit fuzzy, and it was not really a very acceptable way of correcting his very misleading column on the subject.

PORTER: Thanks very much, Jessica.