Gareth Porter: America needed a war hero but his "achievements" riddled by half-truths and pure propaganda

Gareth Porter: America needed a war hero but his "achievements" riddled by half-truths and pure propaganda 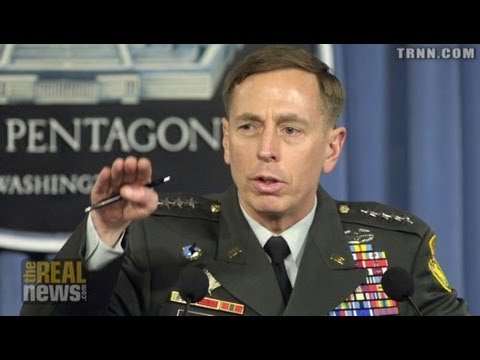 PAUL JAY, SENIOR EDITOR, TRNN: Welcome to The Real News Network. I’m Paul Jay in Baltimore. And welcome to this week’s edition of The Porter Report with investigative journalist Gareth Porter. Gareth now joins us from our studio in Washington, D.C. Thanks for joining us, Gareth.

GARETH PORTER, INVESTIGATIVE JOURNALIST: Thanks very much, Paul. Glad to be back again.

PORTER: Well, this week I’ve been working on my four-part series on how David Petraeus essentially created a myth of his own success, particularly in Iraq, but also in Afghanistan. And I’ve had the first two pieces published at Truthout, and the third is in the can, ready to be published, I think, the beginning of next week. And then the fourth, which will be on Afghanistan, will come later that week.

JAY: Why do you think this is a myth?

PORTER: Well, I think it’s a myth because if you go into the specifics of what actually happened in each of his commands, three commands in Iraq and the one in Afghanistan, what you find is that there’s always a myth surrounding the claims that are made about his success, beginning with his first command, which was primarily in Mosul, the second largest city in Iraq, from 2003-2004. And in that command he was given credit by one journalist after another who went to Mosul and spoke with him and wrote stories for having essentially done what no other U.S. commander in Iraq during that period of the war was able to do, which was supposedly to keep control over the Sunni insurgency. And, again, of course, Mosul is a predominantly Sunni city, and so we’re talking about a Sunni insurgency there.

What I found out from a source which has, as far as I know, not been picked up by anybody else in the news media, a paper that was done at the Naval Postgraduate School in 2008, as I recall, was that if you look at the actual figures for the number of attacks by the Sunni insurgents by month in Mosul and you begin June, what you find is that there was a steady buildup from about 25 attacks per month in around May, May-June, up to more than 130 a month in December, actually. But over that roughly six- or seven-month period, the Sunni insurgents had actually tripled the level of their attacks. The fact is that the attacks in Mosul represented about one-fifth of the attacks countrywide.

So it was simply not true that he was keeping control over the insurgents. They were building slowly, methodically, systematically towards a major attack, which took place later, after Petraeus had left, but clearly could be anticipated by the pattern that was shown in those figures.

And what happened was that Petraeus simply kept that away fromâ€”that set of data away from the visiting journalists. And they never seem to show enough initiative or curiosity to ask for the full set of figures, the whole run of the trend line for attacks by the Sunni insurgents through that period.

JAY: So then the next success story is his command during the transition period.

PORTER: That’s right. And by transition we mean the command of the transition command. That was the command that was supposed to essentially set up a new Iraqi police and army and to basically set the stage for that police and army structure to take over the war eventually. And so this was from 2004 to 2005. And that was a period that doesn’t get much notice. It’s not really much discussed in the news media as a major triumph for Petraeus. And I think the reason is that there was nothing particularly spectacular about what happened, and the news media wasn’t really covering it that much as a Petraeus success.

But what we now know is that what Petraeus did during his command over that transition command was that he was the one who was sponsoring the induction of something called the Wolf Brigade into the U.S. counterinsurgency war. The Wolf Brigade was a roughly 2,000-man openly sectarian Shia brigade of troops that somehow got mysteriously set up in 2004. And when Petraeus found out about it, he jumped right on it, gave them a month or two of training, U.S. counterinsurgency training, and then sent them toâ€”guess where?â€”Mosul to come in and try to track down the Sunni insurgents and interrogate them. And what happened: instead of really helping to quell the Sunni insurgency in a long-term sense, that really added fireâ€”it added fuel to the flames in Mosul, because what the Wolf Brigade did was to torture hundreds of Sunni population, who were accused of being part of the Sunni insurgency. And in most casesâ€”.

JAY: How do we know all this?

JAY: And what about the surge? Petraeus is known asâ€”mostly known because of what’s called the great success of the surge which turned the tide of the war.

PORTER: Right. I mean, this is the biggest part of the myth of David Petraeus. And that has to be broken down into two different myths, I think.

The first myth was about how he got the Sunnis to turn around and become, essentially, part of the anti al-Qaeda counterinsurgency program in Iraq, particularly in Anbar province. And the myth is that this happened because the surge gave the United States more troops to help protect the Sunni population, and it allowed them to oppose al-Qaeda.

And secondly, that Petraeus was so clever about his counterinsurgency strategy that he made the contact with the Sunnis and made them feel that the United States was their friend. But what really happened was that the Sunni insurgents had been ready to cooperate with the United States all along, and the U.S. had refused to, basically, let them take over the local security organs in Ramadi.

JAY: Define cooperator, collaborator, ’cause my understanding what it was: that they wanted to go after the al-Qaeda type terrorist elements.

PORTER: They did. The Sunni insurgents were ready to cooperate with the United States and oppose in armed struggle against the al-Qaeda. And in fact they were trying to do so on their own, but they wanted the United States to cooperate with them, to support them, to give them authority for local security organs and stop opposing the Sunni insurgents. And the U.S. military would not do that until, of course, Petraeus came along. And then he said, okay, we’ll do it. But Petraeus didn’t admit that what he was doing was essentially authorizing or empowering the same people that the United States had been fighting all along and who had basically provided the rationale, the primary rationale for the United States being in Iraq. So that was a big part of the David Petraeus myth.

But the other part of it was that Petraeus always claimed that it was the surge and his counterinsurgency strategy that essentially dialed down dramatically the level of sectarian violence, in Baghdad particularly, and he could show the figures that showed the dramatic decline of sectarian deaths in Baghdad after he arrived. But what he did not point out in his testimony and in his interviews on this question was that the biggest fall in the sectarian deaths in Baghdad had taken place before the surge had even begun and even before David Petraeus arrived in Iraq. And then the second major fall in the level of sectarian deaths in Baghdad happened after Muqtada al-Sadr had given a unilateral ceasefire order to his followers in the Mahdi Army. And that was not because of the U.S. surge or the counterinsurgency strategy of David Petraeus; it was because the Iranians put pressure on Muqtada al-Sadr to stop his high-profile military operations, so that the al-Maliki regime could consolidate its power. And that was the primary concern of both Iran and the other Shia factions that were at play in Iraq.

PORTER: That was. And the irony of the situation was that the United States and Iran were supporting the same horse, as it were, which was the al-Maliki regime. And what Petraeus was telling the U.S. Congress and the press was that the Iranians are fighting a proxy war against the United States. That was, of course, really a political fiction.

And the reason, as I’m going to show in my piece that has not been published yet, is that what Petraeus needed at that moment was the support of Vice President Dick Cheney, and Cheney was the last neocon in the Bush administration who was still pursuing the idea of a confrontation, a military confrontation with Iran, and Petraeus had to sort of cater to Dick Cheney’s desires. And that’s why he was telling a big fib about the actual strategic situation in Iraq at that point.

JAY: And it’s also kind of ironic, staying with your horse metaphor, that the Maliki horse is now more in the Iranian barn than it is the American barn. You can see that from Syria, where the Iraqi government’s allowing Iranian weapons to fly over into Syria without stopping them, in spite of America yelling about it.

PORTER: There are many, many indicators that al-Maliki and the Shia-dominated government of Iraq are fully in the Iranian camp with regard to the most important conflict, as seen from Iraq as well as Iran, which is the Sunni-Shia divide in the Middle East.

JAY: So much for Petraeus winning the war. Thanks very much for joining us, Gareth.

State Sen. Jill Carter ‘Was the Squad Before the Squad’