Russia will play a major role in a deal by ensuring that Iran complies with US demands - and it has a lot of money to gain from it, says Gareth Porter, the author of Manufactured Crisis: The Untold Story of the Iran Nuclear Scare.

Russia will play a major role in a deal by ensuring that Iran complies with US demands - and it has a lot of money to gain from it, says Gareth Porter, the author of Manufactured Crisis: The Untold Story of the Iran Nuclear Scare. 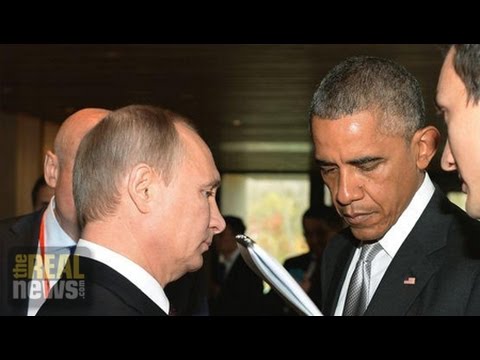 As we approach the November 24 deadline for the Iran nuclear energy agreement with P5+1, the Russian cooperation of the agreement has been nailed down on the sidelines of the APEC meeting taking place in Beijing, as reported by Press TV. The U.S. lifting of sanctions and Iran’s willingness to comply with the specifics hinges on the Russia.

Now joining us from Arlington, Virginia, to discuss all of this is Gareth Porter. Gareth Porter is an investigative journalist specializing in U.S. national security policy. He is the author of a new book, Manufactured Crisis: The Untold Story of the Iran Nuclear Scare.

GARETH PORTER, INVESTIGATIVE JOURNALIST: Hi, Sharmini. Thanks for having me.

PERIES: So, Gareth, explain the role of Russia in these discussions. And why is it so important, Russia’s engagement and in?

PORTER: Well, Russia’s role in the negotiations is really pivotal because of the importance of drawing down the stockpile of low-enriched uranium, that is, uranium enriched up to only 3.5 to 5 percent. And that turns out to be a key to getting a compromise between the United States and Iran, because the United States started out the negotiations demanding publicly and in a very sort of aggressive way that Iran had to reduce the number of centrifuges that it has in operation from the present level of about 10,000 to just as low as 1,000 or 1,500. And, in fact, in the first draft of the agreement, we know that the United States actually put a number (it’s either 1,000 or 1,500 or both) into the actual draft text.

So that was something the Iranians couldn’t agree to, but the Iranians had in mind all along that they would deal with the whole demand that the United States was making for a so-called breakout timeline of six to 12 months by saying that, yes, we can do that, we can do it by reducing the stockpile of low-enriched uranium, and that will actually accomplish the same thing that would be accomplished by a steep reduction in the number of centrifuges. And this technically is correct, and I’ve written about this in my own articles over the past year or so.

But the United States did not really get into negotiating on the question of stockpile reduction until very recently, until September, and at that point it became important for the Iranians to really, as you say, nail down an agreement with Russia, because in order to reduce the stockpile, Iran would have to ship its low-enriched uranium in the stockpile to Russia to be turned into the fuel plates for Bushehr or any future power reactors that the Russians build in Iran. And already they’re negotiating and have already agreed in principle that two more reactors will be built in the coming years. So this turns out to be really the crucial element in bringing about a solution to this political problem. And it was a political problem between the United States and Iran that was at the center of the talks.

PERIES: Now, it’s not that they couldn’t have come to this point the past. For instance, there’s been a lot of posturing back and forth between the U.S. and Iran about this deal. But now that they have IS and fighting the IS at stake, they seem to have been rapidly coming to this point. My question to you is: could this have been agreed to upon prior to this? And does the IS have anything to do with coming to this kind of agreement so quickly?

PORTER: Well, I think the answer to both questions is that yes, this agreement, this compromise could have been reached much earlier. Part of the reason (and, I would guess, really the largest part of the reason) that it wasn’t done earlier is that the Obama administration essentially entered into these talks feeling that it had to sort of practice public coercion, coercive diplomacy with the Iranians by constantly threatening that if the Iranians didn’t agree to reduce the number of centrifuges, that there would never be any deal and they would never get the lifting of the sanctions that the Iranians regard as the payoff for any sort of compromise on its enrichment capabilities. So that was, I think, the–it was primarily a political problem that the Obama administration felt that it had under pressure from, of course, the pro-Israeli right in Congress and in the political system of the United States.

So I think that it was only after July or in July that the Obama administration began to move from posturing politically to really beginning to sit down and bargain with the Iranians and open up the possibility of a compromise. And it was at that point, I think, the Iranians then began to enter into a new phase of their talks with the Russians to nail down this agreement that would govern the shipment of the low-enriched uranium to Russia in order to be turned into fuel plates. And those negotiations, by the way, were complex because they were talking about a number of issues in nuclear cooperation, all of which were closely related–the one thing the Iranians want to play a role in future enrichment of uranium that will be used by the Russians for turning this low-enriched uranium into fuel plates.

So they had to reach agreement on a number of issues, and it’s taken a long time. They’ve been negotiating, really, since late last year. So that’s the first reason. The second reason, I think, as you’ve correctly pointed out, is that the United States now recognizes a greater reason than it even had before to come to agreement with Iran, because they do need Iran to try to make headway in the fight against the Islamic State.

PERIES: And what’s in it for the Russians?

PORTER: Well, what’s in it for the Russians, I think, are two things. One, they do believe that it’s in their interests to get an agreement. I mean, they don’t want this issue of Iran to fester and turn into a growing crisis, a confrontation between the United States and Iran. And, of course, the Obama administration doesn’t want that either. But under pressure from the right, it’s rather unpredictable how this plays out if there’s no agreement. So the Russians, I think, see the value in playing a role in helping this compromise to come about.

But the second thing is that the Russians stand to gain a great deal of money from the prospective agreement they’re close to signing with the Iranians for a deal that would involve at least two and probably more than four future nuclear power reactors in Iran. So that’s a part of the incentive for the Russians to help bring about the deal and to reach a compromise with Iran on the receiving of all this low-enriched uranium. And for one thing, the Russians were giving up a lot of profit from agreeing to take the low-enriched uranium from the Iranians rather than getting uranium at a cheaper price that is available elsewhere. So there are a lot of compromises that have been reached between Iran and Russia.

PERIES: And when we see the agreement underway, it’s P5+1. So the European countries has a big role to play in this as well. And what are those?

PORTER: Well, I think the Russians do in fact have some degree of veto power over U.S. negotiating posture, and I think it could come into play now as we go into the final phase of the negotiations, which are, I think, clearly focused now on the question of sanctions. And this is where the pressure on the Obama administration is at its worst, I think, from the pro-Israeli right. The Israelis, of course, want United States to hold on to those sanctions for as long as possible. That’s why they don’t want a deal to take place. They want to keep the pressure on Iran through the sanctions and not have an agreement which removes them. But that’s going to be necessary, of course. And United States wants to delay the removal of the sanctions for as long as possible to make the deal more palatable to their domestic constituencies here at home. And that means that the final phase of the negotiations are going to be very tough. It’s not certain that they’re going to be able to reach a compromise on this, but I think that both sides have very strong reason to do so.

PERIES: And, Gareth, finally, what’s your take on the secret letter, the letter that President Obama had risen to Ayatollah [Khamenei]?

PORTER: Well, what struck me about that letter–and I’m assuming that the initial reports were reasonably accurate that in fact the point was made by Obama in the letter that unless Iran reached agreement with the United States on the nuclear issue, there couldn’t be cooperation against ISIS. Now, that’s a very interesting notion, because it suggests that in fact the United States needs Iran’s agreement to the nuclear pact more than Iran needs America’s agreement. And that suggests that the Iranians are in fact in a strong bargaining position, perhaps a stronger bargaining position than the Obama administration ever wanted to admit publicly.

PERIES: And this is because of the sectarian gains in the region and also potential sectarian conflicts that could actually be taking place within Iran.

PORTER: Well, I think it reflects the total situation, the total need of the Obama administration for an agreement. I think that Obama himself has recognized that it’s very much in his interest to get an agreement and that without it he’s got two problems, one a political problem, because he doesn’t have anything to show in foreign policy for his eight-year tenure. And the second problem that he has as that if there’s no agreement, then he faces a situation where there is almost certain to be an escalation of tensions between the United States and Iran, and he really doesn’t have any game plan for dealing with that. And therefore he’s in trouble without an agreement.

PERIES: Well, Gareth, thank you so much for joining us and explaining all of this to us.

PORTER: Thanks very much, Sharmini.