Gareth Porter: Rouhani earned the trust of Supreme Leader Khomeni by working along side him on a daily basis

Gareth Porter: Rouhani earned the trust of Supreme Leader Khomeni by working along side him on a daily basis 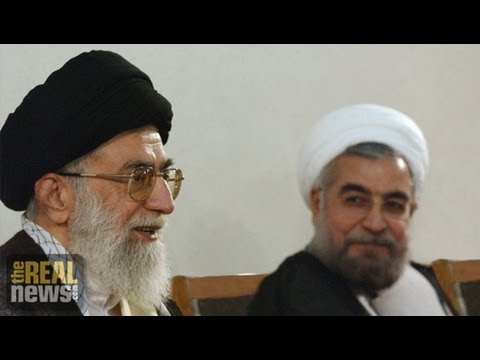 Gareth Porter is a historian and investigative journalist on U.S. foreign and military policy. He writes regularly for the Inter Press Service on U.S. policy towards Iraq and Iran.

DESVARIEUX: So let’s pick up where our conversation left off. Let’s talk more about Rouhani. He has said that he has the authority to make a deal with the United States to end the long-running conflict over Iran’s nuclear program, even though Iran’s nuclear program has typically been understood to be under the control of Supreme Leader Khamenei. Why does Rouhani have Khamenei’s trust?

PORTER: Well, that’s a very important question. I’m glad you’ve raised it, because this is one of the things that has been questioned in recent months, recent weeks in the commentary and analysis on Rouhani’s role as president. And the reality is that Rouhani had won the trust of Supreme Leader Ali Khamenei because of his working with him on a day-to-day basis as the secretary of the Supreme National Security Council of Iran. And this–we have to understand or remember that Rouhani had been, in that position, the equivalent of sort of the national security adviser, if you will, in the United States, although it’s a very inexact comparison, for 16 years or 17 years, from 1989 to 2005. And during that unexampled period in which he had worked on a day-to-day basis with the supreme leader to get approval for policy decisions on national security, it’s clear that Rouhani had essentially won over Khamenei in a way that was really quite convincing and lasting.

And to the extent that he was able to get the supreme leader to approve decisions that were really quite daring, really out of the box, if you will, in this period, from 2003 to 2005, he was taking positions that were really very much against the political grain–for example, in his getting the supreme leader to approve the decision to agree that Iran would suspend its enrichment activities. This was a political red line in Iran. It was something that the overwhelming majority of Iranians were very emotionally, passionately opposed to. And for the supreme leader to agree to that reflected a degree of trust in Rouhani that is really quite astonishing.

And then if we skip to 2004, 2005, Rouhani then, as the person who was in charge of the nuclear file, was of course carrying out negotiations, not personally, directly for the most part, but through a negotiating team that he had assembled with the three European states the U.K., Germany, and France. And during that period, the Iranian position was again very far-reaching. I mean, the Iranians made a proposal in March 2005 which was really quite far-reaching, and in terms of the concession that Iran made. What Iran proposed to do in that proposal that was made in March 2005 was that the Iranians would convert all enriched uranium immediately into fuel rods for–or not immediately, but it would start the process of being converted into fuel rods for civilian nuclear power, and that it would commit itself that there would be no stockpile of enriched uranium that could be then used for higher-level weapons-grade enrichment, which is, of course, the greatest concern the United States and other powers have expressed with regard to the Iranian nuclear program ever since then. And that was very significant because Iran has no capability itself, or did not at that time, although it does now, to convert the low-enriched uranium into fuel rods. So that meant that it was going to turn that enriched uranium into fuel rods through either the French or the Russians abroad, or have them do it on Iranian soil but under the control of the IAEA, the International Atomic Energy Agency. So, again, it was a very far-reaching concession by Iran. It was one–it was a proposal that the Europeans understood really was in the interest of the West. But, of course, the George W. Bush administration had no interest whatsoever in agreement with Iran and said, no, we’ll not agree to have any centrifuges spinning in Iran. So the opportunity was lost.

But, again, I think the important point here is that the supreme leader was willing to go along with that on the assurance by the official himself, that is to say, Hassan Rouhani, that this was in Iran’s interest and that the principle of Iran’s long-term control over its nuclear program would not be compromised.

DESVARIEUX: Well, thank you so much for joining us, Gareth.

PORTER: Alright. Thank you very much.