US and Iran Send Positive Signals – Saudis and Israelis Not Pleased 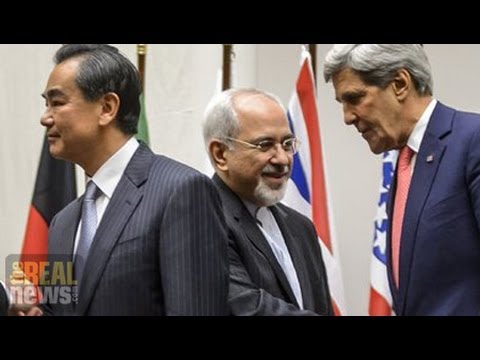 The Iranian foreign minister says negotiations with the P5+1 countries are going well. John Kerry, secretary of state for the United States, says the Iranians are doing everything they’re supposed to be doing. We haven’t heard such warm words between these two countries for a long time.

Now to help us deconstruct just where are we at with these negotiations is Gareth Porter, who now joins me in the studio. Gareth is a historian, an investigative journalist covering U.S. foreign and military policy. He writes regularly for Inter Press Service. And he’s the author of five books, the latest of which is Manufactured Crisis: The Untold Story of the Iran Nuclear Scare.

GARETH PORTER, INVESTIGATIVE JOURNALIST: Thanks very much for having me, Paul.

JAY: So it’s all lovey-dovey. Is that how things are really going?

PORTER: Well, certainly there’s an atmospheric about, you know, good vibes on both sides that these negotiations are serious, that both sides hope that it’s going to be a successful negotiation, will result in agreement.

But, you know, there are very substantive questions that remain where they remain far apart. Both sides have positions that have been asserted publicly on, I would say, three major issues, one being the number of centrifuges that Iran might be allowed to have under the agreement, second being the Arak heavy water reactor facility, and the third being the second Iranian uranium enrichment facility at Fordo, where both the second and third of those issues the United States essentially seems to be saying that they want the Iranians to shut something down or to dismantle a large number of centrifuges, and the Iranians have basically been saying, no, that’s not on, we’re not going to dismantle them. And I think the Iranian argument here is that it’s not necessary to dismantle facilities in order to meet the requirement that is supposed to be at the center of these negotiations, which is that Iran will not be able to generate enough enriched uranium to have a nuclear weapon.

JAY: Which means, don’t enrich to 20 percent. They want the enrichment down to 5 percent.

PORTER: It’s not just the 20 percent enrichment. It’s also the idea that they will be enriching at a lower level at a pace that will not exceed the ability of Iran to absorb this in their nuclear power program. And I think that’s the way in which they intend–.

JAY: ‘Cause that was one of the issues that even some people who are critics of the IAEA and the American position, they were also even wondering why amass so much enriched uranium if it’s just for civil power. So the idea is keep it at a level that will only be for civilian use.

PORTER: Well, it’s a question of not just the number of centrifuges, but how many of them are in use and to what extent the Iranians are allowing inspection by the IAEA, which would allow the West, P5+1, the rest of the international community to be sure that this is not going to be used for a weapon.

And there, I think, there’s a lot of flexibility possible in these talks. And we have to–I think we still have to see whether the politics surrounding the talks are going to reduce that flexibility, particularly on the American side, to the point where there’s going to be a deadlock.

JAY: Now, when Kerry says Iranians are doing everything they’re supposed to be doing, it means the Iranians have in fact reduced their 20 percent stockpile.

PORTER: They are in the process. They’re ready to give up 20 percent enrichment and to bring the stockpile down to essentially zero.

JAY: Now, this is seen as some big concession by the Iranians. They’re kind of giving up on their weapons program. But as many times as you and I have talked about this, I think we have to keep reminding everyone there has still never been any evidence that there is a weapons program.

JAY: Well, the argument’s been that Iran wants to get to a point not weaponized, but a point where it wouldn’t take long to weaponize. And there’s other countries, apparently, that are at that stage. I believe people suggest Brazil is and some other places. Even Japan, I think, is thought to be at a point where they could weaponize their program.

But Netanyahu from Israel is saying, if Iran doesn’t completely take apart any ability to enrich, they will always be able to get back to a point where they could weaponize. So the Israeli position is: no enrichment at all. Is there any validity to the Israeli position? And then where are the Americans on that point? Because that’s a deal-breaker.

PORTER: Well, it is a deal-breaker. The Israelis know it’s a deal-breaker. And that’s precisely why they’ve been putting forward that position. Of course, what Bibi Netanyahu has always wanted is for the talks to break down and for the United States to be put in the position where it has less flexibility about the question of war and peace than it does today.

But there is no validity to it, and the reason is quite simple. That is mainly that the United States and the rest of the international community and Israel can perfectly well verify that Iran is not moving toward a nuclear weapon because of the intrusive inspection that would be required and the Iranians have already agreed to under this agreement.

So there is really no need to talk about dismantling a nuclear program. It’s a farfetched notion which really only fulfills political purposes for Israel of, as I say, putting the United States in a position where it’s much more easily pushed into a war with Iran.

JAY: Is this the only real stumbling block? I mean, are the other issues more or less not so difficult to work out? In other words, if the Americans will accept that the Iranians can continue to enrich at a, you know, 5 percent level in terms of quantity and acceptable level, can the Americans accept that?

PORTER: The problem, I believe, is that this administration has been so completely sold on the false narrative that surrounds the Iranian nuclear program, that has surrounded it for many years, that they almost believe the Israeli propaganda. They’re just short of believing the Israeli propaganda. And that makes them very susceptible to pressure from the Israelis, just apart from, of course, the Israeli lobby through particularly the Senate Republicans now, but not limited to them, putting forward legislation which would basically blow up the talks. And basically the administration is prone to taking a harder line than is really necessary in order to prevent Iran from having a capability [crosstalk]

JAY: But there is a strategic shift here by the Americans. I mean, you and I have talked about this.

JAY: And even to have the negotiations. You and I have talked before that this probably doesn’t even have all that much to do with the nuclear program. The American intelligence agencies say, you know, that they’re not weaponizing. Everyone has said, including from the Israeli intelligence, that even if you attack Iran, all you’re going to do is probably speed up the program, that this is actually more about sanctions and weakening Iran as a regional power in rivalry with Saudi Arabia and Israel in the region, that the Saudis and the Israelis don’t want Iran back on the stage any more forcefully than they already are, ’cause because of the Iraq War they’re already so much more on the stage. But the Americans, in opening this door, have kind have said, well, we do have our own national interests, and we’re not getting into a war with Iran because of you.

PORTER: We’re not getting into a war with Iran. That’s correct. And that is a strategic difference that’s important.

However, short of that, short of going to war with Iran, you still have an administration here that is committed to a strategy that is going to regard Iran not just as a rival for power, but as an enemy, as a threat, and as something to be contained by a variety of means. So that’s strategically is still a very serious problem.

PORTER: Well, I think that that in effect, when you look at Syria, that the United States is trying to play something of a mediating role or a role in between the two sides in Syria, the Iranians supporting Assad, and the Saudis, of course, supporting the jihadist (as well as non-jihadist) effort to overthrow him. But that is, I think, very different from at this point trying to play off Iran and Saudi. I think the position of the United States is still that there is a kind of loose alignment between the United States, Israel, and the Saudis to contain Iran. But that still plays a role far more than moving away from that towards a position of trying to mediate between Sunni and Shia forces in the region.

JAY: These negotiations can still spin out of control, that this is not a done deal.

PORTER: They can still fail. I think we have to be very concerned about the possibility that this administration will feel that the political pressures on it, combined with its mentality that after all, the Iranians still want to get nuclear weapons somehow, that they will feel that they have to take a harder-line position than is really justified by the facts on the ground.

Thanks for joining us on The Real News Network.