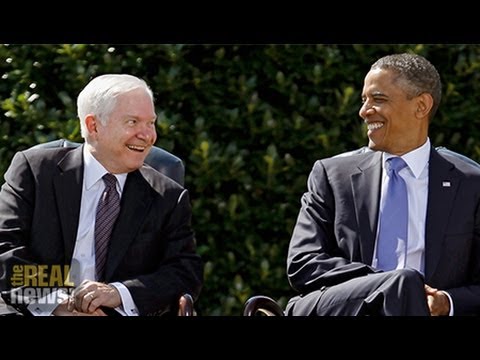 JESSICA DESVARIEUX, TRNN PRODUCER: Welcome to The Real News Network. I’m Jessica Desvarieux in Baltimore. And welcome to this edition of The Gareth Porter Report.

Now joining us is Gareth Porter. He’s a historian and investigative journalist on U.S. foreign and military policy. He writes regularly for Inter Press Service towards Iraq and Iran. And he’s the author of five books, including the latest, titled Manufactured Crisis: The Untold Story of the Iran Nuclear Scare.

GARETH PORTER, INVESTIGATIVE JOURNALIST: Hey. Thanks for having me back again. Good to see you again, Jessica.

DESVARIEUX: Good to see you as well.

So, Gareth, we have former defense secretary Robert Gates. He’s released his memoir, and he’s really come out being very critical of President Obama and his commitment to the Afghan War strategy. Can you just speak a little bit–I know you wrote a piece recently. What are some of the omissions that Gates makes in his book?

PORTER: Well, you know, the way in which the Gates memoir story has been played by the commercial news media is that this is a question of the president’s policy commitment to the war in Afghanistan being questioned by his secretary of defense. And, of course, the White House then comes back and defends itself, says the president is firmly committed to the cause in Afghanistan and, you know, supports the U.S. troops there.

What this coverage of the memoirs by Gates and his comments on Afghanistan is really omitting–and in fact covering up, I would argue–is a really important story about how Obama was very much opposed to sending nearly 40,000 troops, additional troops to Afghanistan in the first place and was really put under terrific pressure by the military leadership and the Pentagon to go along with the request from General McChrystal in 2009 for that nearly 40,000 troops. And then, when he went along with that, but with the major caveat, a major set of conditions placed on the additional troops, there was immediately an effort by the U.S. military, supported, again, by Gates at the Pentagon, as well as Secretary of State Hillary Clinton, to really interfere with or to roll back (I think is the best way to put it) the policy initiative that the president added to the Afghan War policy, which was that he wanted–that is, Obama wanted–a beginning of troop withdrawal and a handover of responsibility by the U.S. military to Afghan forces by mid 2011, only 18 months after the beginning of this troop surge in Afghanistan. So that’s a huge story, which was simply forgotten about or just neglected by the news media.

And I put together that story in my piece for Inter Press Service last week, but it was based to a great extent on already published information. It was not secret information or anything like that. It was in part based on the book Obama’s Wars by Bob Woodward, which used notes from the top-secret meetings at the White House between Obama and his top national security advisers in 2009 and 2010.

And in those meetings, what we learned is that Obama was extremely skeptical about the proposed escalation in Afghanistan and was actually arguing quite strenuously that the real U.S. interest in that part of the world was not in Afghanistan, the real security concern was Pakistan. And, in fact, Obama, joined by Vice President Joe Biden, was arguing that U.S. security interest in the stability of Pakistan might well be negatively affected by stepping up the war by introducing tens of thousands of more troops into Afghanistan. So they were really pushing back against the troop request in October 2009.

And I point out that in fact someone in the Pentagon or the military or the State Department leaked to a news outlet, McClatchy newspapers, some of the secret discussions within the White House between the president and his advisers and were telling the McClatchy papers that the top security officials in the administration were complaining that the White House was refusing to take seriously the risk of allowing al-Qaeda to come back into Afghanistan if the troop request was not granted to General McChrystal. So that was a remarkable case of a leak to the press of some of the most sensitive information that is actually held by top officials of the U.S. government. And it was, of course, used to try to force President Obama’s hand.

And then, as I say, almost as soon as Obama then agreed to the troop increase, or at least the vast majority of that increase, in November, late November 2009 (but only on the condition that the troops would begin to be withdrawn in mid 2011 and that the responsibility for the war would begin to be turned over to the Afghans), the military, specifically General David Petraeus, began to push back and to try to force the president to change his policy, to withdraw or to retreat from that position that had been articulated publicly by the president through his spokesman in early December 2009.

And so really the storyline that is referred to in the memoirs of Robert M. Gates about the president saying that–referring to being gamed, apparently, by Petraeus, what that was really about was Petraeus, supported, again, by Gates and other top officials in the national security team of Obama, trying to get Obama to relent on his insistence that the withdrawal of U.S. troops should start in mid 2011. That was referring to a meeting that took place in March 2011.

DESVARIEUX: But, Gareth, if there is this clear tension between the Obama administration as well as those in the Petraeus camp and Robert Gates, why would, then, President Obama even have these people on board with him? I mean, Robert Gates, he appointed him. He kept him on as secretary of defense. Why keep these people in your camp?

PORTER: Well, this is all politics. It’s all domestic politics. And it has to do with the very strong tendency within the conventional thinkers of the Democratic Party, that is to say, conventional thinkers about politics and national security, that no Democratic president, particularly a Democratic president who does not have his own sort of history of being a major figure in national security policy, can afford to take positions that are opposed to the judgments of the military leadership and the leadership of the Pentagon. And so that was the original rationale for Obama to choose Robert M. Gates as his secretary of defense. Of course, he was a holdover from the Bush administration, and it was quite explicitly a matter of taking someone who was associated with the Republicans on national security and having him be, in a way, the cover politically for the Obama administration to say, look, we are respectable on national security because we have a Republican figure as secretary of defense. And so this was the politics surrounding this whole set of interactions between Obama and the military leadership and Gates himself.

Obama felt–obviously, I think, quite wrongly–that he had to compromise constantly with the military and with Gates. And his political adviser, Leon Panetta, during that period is quoted by Woodward as telling Obama, look, you cannot afford to say no to the military when they make a request like this. You have to go along. Just do what they say. That’s exactly what Panetta told him. And clearly this was the cast of mind that made impossible, or at least appeared to be impossible to Obama, to simply fire Gates and get someone in there who would do what Obama knew was the right thing to do on Afghanistan.

DESVARIEUX: Alright. Gareth Porter, thank you so much for joining us.