Romney Made Multi-Millions in Detroit Bailout

Romney Made Multi-Millions in Detroit Bailout 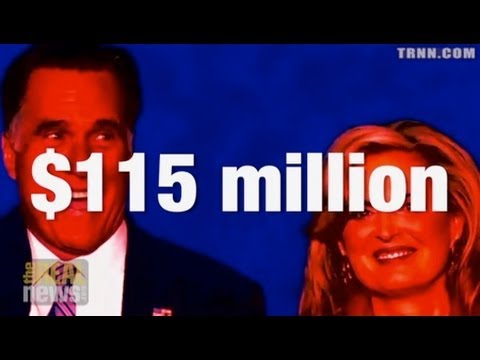 In a new book called Billionaires & Ballot Bandits, Greg Palast outlines nine easy steps to steal an election. This is the first in a series of interviews we’re going to do with Greg. So those of you that want to steal an election, listen closely. Thanks for joining us, Greg.

JAY: So Greg Palast, as most of you probably know, he writes for Rolling Stone; he’sâ€”reports for BBC Television, Newsnight; he writes for The Nation, The Guardian, Harper’s.

So you have a new piece in The Nation which is about how Mitt Romney and some of his friends get a lot of money out of the Detroit meltdown and the bailout. How did that happen?

PALAST: Yeah, I wouldn’t call it a lot; I’d call it humungous, okay, like, monsterâ€”I mean, in my neighborhood. Romney made between $15Â million and $115Â millionâ€”I want to repeat thatâ€”$115Â million on the auto bailout.

PALAST: Well, when we try to ask him which it was, rather thanâ€”I thought he was going to say, “I didn’t make any money”; he didn’t deny it at all. So I suspect the numbers are all low.

PALAST: Romney said he was opposed to the bailout.

GOV. MITT ROMNEY, U.S. PRESIDENTIAL CANDIDATE: I wrote an op-ed in the paper, and I said absolutely notâ€”don’t write a cheque for $50Â billion.

PALAST: But these documents reveal that a government bailout cheque was in fact cashed by none other than Ann Romney. It says that Ann Romney had a hunk of Mitt’s vast fortune in Elliott Management, Paul Elliott Singer’s vulture fund.

PALAST: But the important thing is that his buddies, his top donors and his partners, three hedge fund managers, earned $4.2Â billion off the auto bailout, minimum. Here’s how they did it. These guys grab the old Delco auto parts division of General Motors. It used to be called Delco, and now it’s called Delphi, a separate company. Delphi went into bankruptcy ahead of GM. These guys, Romney and his partners, bought up Delphi for $0.67 a shareâ€”nothing.

JAY: Now, just to be clear here, this is Romneyâ€”this is Bain Capital doing this?

PALAST: No, it’s not. It’s not Bain Capital. People think of Romney in Bain. He’s left Bain. His partner is a guy named Paul Singer, better known as “the Vulture”. He runs a vulture fund called Elliott Management. They’re not nice guys. Last time I was hunting these guys down for BBC, I was in the Congo, where Elliott Managementâ€”Paul Singerâ€”figured out how to snatch aid money given to the Republic of Congo to help stop a cholera epidemic and he figured out how to pocket it. I’m not kidding you.

So the Vulture, Singer, with his partner Romneyâ€”I should say, the Ann Romney Blind Trust, or, as I call it, the blond trust, because it’s not really a blind trust in any sense of the word. It’s not recognized by the U.S. government at all as a blind trust. If I can see into it, so can Mr.Â Romney, who was a CEO of an investment bank, right? So they know what they’re doing.

These guys buy up the auto parts division of General Motors, $0.67 a share, secretly. The government doesn’t know what’s going to hit it. And they say, we own this thing, and if you don’t give us what we want, which is almost $13Â billion, we’re going to shut down GM. We’re shutting you down. That’s a quote.

JAY: And they can do that because they’re an important parts supplier.

PALAST: They used, actually, industrial espionage. Theyâ€”illegal, as far as I can tell, which is that they hired General Motors purchasing executives to tell them where GM was vulnerable, and they found out that, for example, GM has no steering columns, no steering wheels. They would shut down like boom, because this was their own auto parts division, but they made it a separate company, stupidly.

So they said, we’re shutting down GMâ€”and, by the way, we’ll take Chrysler down. And when I say “shut you down”, theyâ€”not put GM or Chrysler into bankruptcy. They’re already going bankrupt. I’m talking about liquidating, finishing them off, so that they were doomed.

JAY: But how could they do that? What’s the mechanism?

JAY: So they can sink them because they simply don’t supply the parts.

PALAST: They would stop, they would fall apart immediately. So there was no replacement. They would need tens ofâ€”in fact, they went so far, Romney’s partners, as to actually hand GM a study sayingâ€”from your own purchasing agents, saying, this will cost you tens of billions of dollars and several years to replace our parts. Well, of course, GM didn’t have billions, even with the government, and it certainly didn’t have years.

JAY: So this is all part of this period of the bailout and whether the government’s going to buy these shares at the premium that the fund is asking for.

PALAST: Well, what they did was they said, weâ€”no, just give us the money or you don’t get the parts. The government, with GM and the owner of the Detroit Pistons, a guy named Tom Gores, together, the Pistons GM and the government were going to buy back Delphi and make it again the old Delco auto parts division, ’cause the government said, you can’t have someone holding your partsâ€”you know, it’s a very uncomfortable biological situation. And so a deal was cut that would have saved most of the jobs. These guys said, we’re shutting you down, give us our money. They got their money.

JAY: What year are we in?

PALAST: We’re in 2009. They got their money, and then, between 2009 and 2011â€”even before thatâ€”they shut every single Delco parts plant in the United States except one and fired every single UAW worker, every one, 25,200 UAW members, and moved the entire operation to China. And that story didn’t come out. It was from my investigation for Billionaires & Ballot Bandits, and then we put it on the cover of Nation magazine.

JAY: Now, when do they buy the Delphi shares?

PALAST: â€”in about ’06, ’07. And then Singer the Vulture moved in in JuneÂ 2009. The two weeksâ€”in two weeks, right after the government already announced the deal, the government already announced that GM was buying back Delphi with the owner of the Pistons, it was done. And in those two weeks, he secretly bought up allâ€”went around and secretly bought up old debts of the company, at least $1Â billion, face value, of debt.

JAY: Now, so how does it benefitâ€”if Romney’s plan for GM had been followed, which is allow it to go into bankruptcy, don’t give it emergency funding in the course of that process, which, if I understand it correctly, is the main difference between the Obama plan and the Romney plan, how does that help Romney vis-Ã -vis Delphi?

So Romney knew this was a cheap shot. In other words, he could say, oh, well, I’m against the auto bailout. He actuallyâ€”the term he used was, Detroit doesn’t need a check, it needs a turnaround. Well, they got the check and Romney cashed it. And, in fact, his campaign has not denied that he profiteered. He says it’s Obama’s fault, believe it or not, it’s Obama’s fault that Romney got really, really rich and probably about $115Â million extra in his pocket, ’cause he said, basically, Romney’s a smart businessman. If Obama was going to write the checkâ€”.

JAY: And where did Romney acknowledge this?

PALAST: He sent an email to the newsletter The Hill, which is the kind ofâ€”.

JAY: And The Hill‘s printed this.

PALAST: The Hill has printed the Romney campaign’s statements verifying that he earned a big profit.

PALAST: Well, let me explain something. You have to turn around. There’s a sign behind you that says The Real News. See, what we get in mainstream news in America is unreal news, infonews, infotainment news.

JAY: But wouldn’t the pro-Democratic Party press, of which a lot of it is, wouldn’t they jump all over this?

However, I will say the Obama campaign did spread around my story, I noticed. I certainly don’t like politicians using my stuff, but go ahead. You know, it’s a free country. And still no one would touch it.

And, I mean, one of the things is that I work for BBC TV. A story like this, all my stories at BBC TV are the top of the nightly news. And I write my stories for The Guardian newspapers. It is the front page of the biggest, most influential newspaper in the world that goes all over the planet except the U.S.A. So these storiesâ€”.

JAY: Oh, The Guardian online’s big in the U.S.A. It’s one of theâ€”I think it’s in the top five news sites in the country.

PALAST: For good reason, because you don’t get real news except here or The Guardian and BBC. And to me, I must admit, I’m actually quite stunned. And now this book I wrote with Bobby Kennedyâ€”Bobby Kennedy’s my coinvestigator at Rolling Stone and he’s a law professor. So he wrote a couple of chapters of this book. And he’s just stunned, himself. We can’t get close to the American mainstream media. They don’t want to touch it. They don’t want to do anything that involves, basically, as they call it, class warfare.

JAY: Okay. Well, we can do a whole segment on that.

Alright. If you want to see more detail of this article, The Nation has printed the article. It’s based on a chapter in the book. And the Nation article is calledâ€”.

JAY: Okay. Great. We’ll do aâ€”below this video player you’re watching us in, there’ll be a link to the article. Thanks for joining us, Greg.