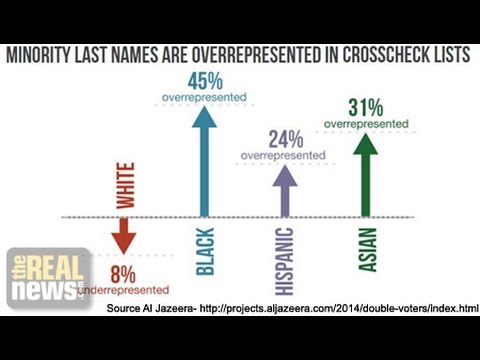 Greg Palast won the December Sidney Hillman award for “Jim Crow Returns” and “Challenging Crosscheck”, a two-part Al Jazeera America exposé that shows how millions of innocent people who wanted to vote were left out as suspected fraudsters.

On the eave of the 2014 elections, officials began to purge the voters based upon Interstate Crosscheck, a voter fraud prevention software. More than 40,000 voters were dropped from the rolls in Virginia alone.

Now joining us from New York, New York, to discuss all of this is Greg Palast. Greg is investigative reporter for the BBC and The Guardian. He’s also a bestselling author.

Thank you so much for joining us, Greg.

GREG PALAST, INVESTIGATIVE REPORTER, BBC AND THE GUARDIAN: Glad to be with you, Sharmini.

PERIES: Greg, first of all, give us a take on what kind of numbers are involved. How many people were prevented from voting?

PALAST: I can give you important numbers: 28 and 7 million. The 28 are the 28 states, almost every one Republican-controlled, that are part of this program called Interstate Crosscheck. Interstate Crosscheck is meant to hunt down and identify people who commit the felony crime of voting twice in the same election, once in each of two states.

Now, the other number that you’d be interested in is how many people in America are listed as suspected double voters committing this felony crime. The answer is, according to Crosscheck, 7 million; 6.9 million Americans in the 28 states are tagged as people voting twice.

Now, what’s extraordinary about this is that in the last decade about three people have been convicted of voting twice in two different states. And here are 7 million people are listed as suspects. Why would they do it, and why is it almost exclusively a Republican activity? The answer is: on the basis of the accusation that you may be a double voter, you can lose your vote. Hundreds of thousands have lost their votes–I believe it’s now busted 1 million votes–in the midterm election. Not every one of the 7 million people on that list have lost their vote. We think it’s about 1 million right now.

PERIES: Greg, so the number of people who lost their vote, are they challenging this at all?

PALAST: No, they aren’t challenging it, because you don’t know if you lost your vote, because of Crosscheck.

Years ago, in 2000, I uncovered that Katherine Harris removed tens of thousands of black men from the voter rolls of Florida, calling them felons, illegally registered, who can’t vote in Florida. But in fact not one–not one!–was an illegal voter. Of the 58,000 people who lost their vote, every one was innocent, except for the crime of voting while black.

Why do I bring this up? It’s the same game. However, back in Florida 2000, Katherine Harris, if you lost your vote, you had an F put next your name, meaning you’re a felon. So you would know that you’ve been accused wrongly of being a felon and you could fight it.

PERIES: Yeah. Greg, you were–earlier in your answer you said that this was something conducted largely by the Republicans. What did you mean by that?

PALAST: Yes. Well, it was started, the Crosscheck program was started by the secretary state of Kansas, a violently partisan Republican operative named Kris Kobach. And he is the one who talked and made the pitch to bring in other states. And, of course, it’s almost exclusively a Republican club, because the people who lose their vote are overwhelmingly voters of color and poorer voters by the methods that they use for uncovering who’s a supposed double voter. And so it’s the Republicans who are gaining from this, almost exclusively.

PERIES: Do you think it changed the outcome?

PALAST: Absolutely. I’m looking at figures–for example, I was in North Carolina. There is no doubt at all that Crosscheck won the Senate race for the Republicans. Kay Hagan, by every poll, was supposed to have walked back into offices for Senator for North Carolina. But, in fact, after Crosscheck identified over a quarter million, a quarter million people in North Carolina as illegal voters, potentially illegal voters, that swamped the few thousand vote margin. Same in Colorado. Colorado is big on using Crosscheck and wiped out a lot of low-income and minority voters, enough to knock out incumbent senator Mark Udall. We can look at states like Alaska, Georgia, and others. And we don’t know, because we can’t identify exactly–the states are being very cagey; unlike Katherine Harris, they’re not giving us the names of all the voters who have been purged, except for Virginia, which did confess to removing 41,000 people for supposedly committed the crime of double-voting–not arresting a single one, by the way, even though it’s a felony crime. These people really did this.

PERIES: And the voters themselves have no idea that their vote is not been counted.

PALAST: You have no idea. Number one, if you send in an absentee ballot and you’ve been knocked off because of Crosscheck, you don’t know that your ballot hasn’t been counted.

That’s one of the foolish things, by the way, about mailing in your ballot. If it’s the only way to do it, fine, but don’t mail in your ballot. You don’t know if it’s been counted. Only Oregon will tell you if your vote didn’t get counted and will give you a chance to correct or challenge that.

PERIES: So when did the voter find out that they would not be counted? Was it at the polls?

PALAST: You wouldn’t find out at all. If you mailed in your ballot, you don’t know if that ballot was counted. If you’re on the Crosscheck list, too bad, buddy. If you sign a so-called provisional ballot and they told you, well, that you’re ineligible to vote for a reason that they won’t tell you–they might tell you, for example, that you were an inactive voter, even though you’re standing there ready to be active and vote.

PALAST: Yes. Two things. I will be investigating, because it’s only begun. I started this with Al Jazeera. It took us six months of fighting to get part of the list. Remember that they were saying that 7 million Americans are suspects in a criminal investigation, so they wouldn’t give us the information saying, oh, it’s a criminal investigation that said, but, where are the criminals? So, finally, we were able to crack through and legally get 2 million of the names, all bogus, I mean, every one of them.

I mean, I’m looking at, for example, James Elmer Barnes Jr. James Albert Barnes Jr. is supposed to be the same voter as James Cross Barnes III. I actually spoke to James Elmer Burns Jr. He says he’s never been Cross, his middle name, he’s never been III as a suffix. He’s always been Jr. He doesn’t know who this is. It’s a guy from another state. It’s all common names like, for example, you have Amy Chung, you have Jorge Rodriguez, you have Joe Black, a common African-American name. Because minorities have common names, they’re more likely to be caught up in this dragnet.

Now, is anyone doing anything about it? Yes, we do know that the head of the Democratic Party in Georgia, the head of the Georgia legislature, she is ready to take action, because basically they tried or they may have in fact stolen the Senate race in Georgia, where half a million people have been identified as double voters. And this was done without telling anyone in the legislature that this massive purge had begun. So I know at least George is acting, and I know that the organization Color of Change is ready to take this on nationwide. And we’re going to see, I think, some legal action being taken.

My job as a journalist is just to uncover the lists, which is very difficult, and to stay on the story.

PERIES: Right. So thank you so much for joining us, and congratulations on the Sidney Hillman award.

PALAST: Thank you very much.