Why Did the US Government and Big Oil Hate Chavez?

Greg Palast: Chavez made big oil pay serious royalties which he used for social programs, he enjoyed majority support in many elections, but American media vilifies Chavez as a dictator

Greg Palast: Chavez made big oil pay serious royalties which he used for social programs, he enjoyed majority support in many elections, but American media vilifies Chavez as a dictator 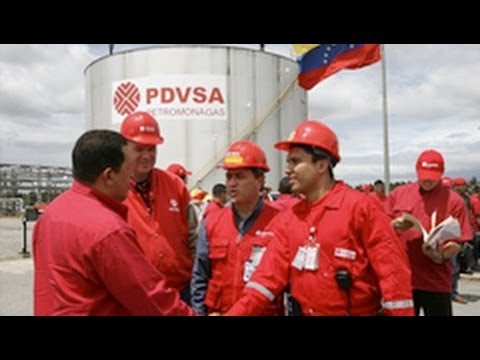 On Tuesday, President Hugo ChÃ¡vez of Venezuela died, as most of our viewers know now.

Now joining us to discuss the significance of his life and the meaning of his death is Greg Palast. Greg’s a investigative journalist. He’s worked for the BBC. He’s written for The Nation magazine, Rolling Stone. He’s the author of a new bestseller, Billionaires & Ballot Bandits.

Thanks for joining us again, Greg.

GREG PALAST, BBC INVESTIGATIVE REPORTER: Glad to be with you, Paul.

JAY: Well, first of all let’s talk about your connection with ChÃ¡vez. You’ve made at least one or two films about ChÃ¡vez. You got to know him personally. What were your impressions?

PALAST: Well, I was assigned by BBC Television to find out who this guy was and why the U.S. wanted to kill him. Pat Robertson made the statement on the air Hugo ChÃ¡vez thinks, you know, we’re trying to kill him and we ought to just go and do it, for the simple reason that Reverend Robertson made, which is that Hugo ChÃ¡vez is sitting on the world’s largest pool of oil. It’s biggerâ€”now the Venezuelan reserves are actually bigger than those of Saudi Arabia. No one’s close. And therefore the U.S. oil companies, the British oil companies, French oil companies want to know why Venezuelans are sitting on top of their oil and won’t give it away to them.

PALAST: No. ChÃ¡vez never wanted to stop selling oil to the U.S. His nation would die if it didn’t sell oil. The idea that ChÃ¡vez would ever threaten to remove oil is ridiculous.

But what the U.S. oil companies and the big oil companies around the world didn’t like is that ChÃ¡vez wouldn’t give the stuff away. ChÃ¡vez sells Venezuelan crude oil. As of last week, it was about $101 a barrel. That’s $33 a barrel more than the Canadians sell their heavy oil for, the same type of oil that ChÃ¡vez sells, which is, by the way, as I’ve mentioned on your program before, the reason that the Koch brothers and the U.S. is pushing for this so-called XL Keystone pipeline. It’s all about trying to get oil at a cheaper price than ChÃ¡vez will sell it. And ChÃ¡vez wouldn’t sell it cheaply, because he uses that money, extraordinarily, unusually, for the Venezuelan people. It’s just unheard of that a big oil nation uses their money from oil to give to the people.

JAY: Right. Yeah. Well, in terms of what you’ve seen so far, American media’s reaction to the death of President ChÃ¡vezâ€”actually, in one of the other interviews I’m going to show this again. Here’s The New York Times just hours after President ChÃ¡vez’s death, and the headline is “ChÃ¡vez dies leaving a bitterly divided Venezuela.” My comment wasâ€”we can put that down nowâ€”my comment was: and tell me exactly which country isn’t bitterly divided. The United States is this great, harmonious paradise? And especially an oil country, yeah, you’re going to have a division over who gets to use the oil wealth.

PALAST: Actually, I completely disagree. It’s not a bitterly divided nation. ChÃ¡vez was overwhelmingly reelected several times. I’ve been all over the United States covering elections here and all over Venezuela and all over many nations covering elections. Venezuela’s actually one of the least divided nations on the planet. The ChÃ¡vez administration was unbelievably popular.

He’s very, very, very popular there. He was popular, his party’s popular, for a simple reason: as one of his opponents told me, a broadcaster, she said, well, you know, ChÃ¡vez gives bread and bricks to the people, you know, ’cause they used to live in shanties; they now live in real houses. They were starving; now they have food. They had no medicine; now they haveâ€”you know, ChÃ¡vezcare beats Obamacare by a mile. So of course they vote for him. And she said that with disgust, like, you know, how dare he give the oil money to the poor people. But that’s what he did. So it’s not a divided nation thatâ€”yeah, I mean, you could say it’s divided 75-25, but that’sâ€”.

JAY: Well, we could argue about this, ’cause I think it may be more like the vote breaks down, which is maybe 55, 60 was the support in ChÃ¡vez, and you could have 30Â toÂ 40Â percent that were opposed, which hereâ€”I mean, the United States, you’reâ€”who knows? I mean, a lot of people don’t vote, and it’s maybe 50-50.

But I think you’re right. I mean, clearly he won election after election and he had majority support. But that doesn’t mean there was a lot of bitter opposition to him, and not only from just the rich. There wereâ€”you know, if youâ€”I’ve been in Caracas quite a few times, and, you know, there was opposition even at levels in the working class, in the middle class. But I take your point. The majority of people clearly supported ChÃ¡vez and what he was doing.

PALAST: Yeah. I mean, there are always those that felt that the revolution, as he called it, didn’t go far enough. So there’s always a big opposition on the left. And young people were chafing. They want a new world. They hadn’t had the deprivations of their parents. But, you know, he was a popular guy.

JAY: So talk a little bit about the American media reaction to his death. The level of venom is really something.

And, well, we know why PBS. Number one funder of PBS is Chevron Corporation. I mean, they’re the petroleum broadcast system, and they carry the oil company line.

And the oil companies have always been just screaming angry about Hugo ChÃ¡vez. And why? It’s because of his hydrocarbon law. In 2001 he passed a law through the legislature that said that Venezuelans will no longer take 16Â percent of the value of their oil in selling it abroad but 30Â percent. That’s because they cut the first contracts and set the first royalties when oil was $10 a barrel. Now it’s $100 a barrel, so they said, you know, some of that profit has to go to the people. Heavy oil in Venezuela was sold to foreign companies like Exxon at a 1Â percent royaltyâ€”the Venezuelans got a penny out of the dollar of their own oil. He said, well, that changes to 16Â percent.

Now, there’s another leader who did that named Sarah Palin in Alaska, who also raised royalties on the same U.S. oil companies by about the same amount. But no one said that Palin was a dictator. But in the case of ChÃ¡vez, they say he’s a dictator so that they can try to overthrow him.

JAY: Yeah, you couldn’t over the last few years read a newspaper story, hardly a story where the word dictator didn’t get into the first paragraph when describing ChÃ¡vez, in spite of the fact he would win election after election. But let me ask you something else.

PALAST: Yes, in factâ€”yeah, in fact, let me give youâ€”this is, I think, an important example. You had a guy named Romero of The New York Times, has the interview with ChÃ¡vez, and he asks him: when are you going to give up power? Now, has he ever gone up to Obama or to Bush and sayâ€”and Bush wasn’t even elected, unlikeâ€”you know, did he ever go to Bush, any New York Times reporter, and say, when are you going to give up power, when you have an elected president in the middle of a term? And he kept calling him a strongman, an authoritarian, dictator-like (whatever that means; that’s like Italian-like or something).

And, you know, this is all aboutâ€”in other words, he didn’t go along with what the oil companies wanted. And they would say things like, bitterly divided nation, oh, destroyed the Venezuelan economy. The Venezuelan economy is increasing about 5Â percent this year, as it has been steadily for a few years. I’ll take that type of wreckage for the United States growing at 5Â percent a year. And, you know, he’s done a tremendous job for the Venezuelan people.

Now, look, I had my problems with ChÃ¡vez. ChÃ¡vez called me his friend. I said, no, I’m not your friend, because I’m not the friend of any politician. I don’t care who they are. I don’t want to be charmed. I don’t wantâ€”you know, they always disappoint me, they always break my heart. I’m here to report the story, and I told some stories that he and his crowd didn’t like.

But, you know, I’m not going to join the New York Times crowd and talk about him as a dictator or a guy who won’t give up power. They keep talking about him holding power. He’s elected.

JAY: Yeah, I remember that moment. You were one of the only one or two journalists that actually tracked that story down. Everyone else either took it from the State Department or they took it from the Venezuelan media, who were actually in on organizing the coup.

PALAST: That’s right. The Venezuelan media were in on it. In fact, one thing I disagree with ChÃ¡vez is that he closed down one of the stations. But it was a few years after that coup attempt. But if any United States network, yours or Fox or anyone else, called for the violent overthrow of the Obama administration, said, kidnap the president, kill him, take over, I think you’d be shut down. Now, violent overthrow of the government is punishable by death in our constitution.

JAY: Alright. Thanks very much for joining us, Greg.

November 5, 2019
Sign Up for Our Newsletter
Help Us Make Real News!