Greg Palast: Koch brothers could save two billion dollars a year if they can replace Venezuelan heavy crude crude with Canadian tar sands - one of the dirtiest sources of carbon emissions on the planet

Greg Palast: Koch brothers could save two billion dollars a year if they can replace Venezuelan heavy crude crude with Canadian tar sands - one of the dirtiest sources of carbon emissions on the planet 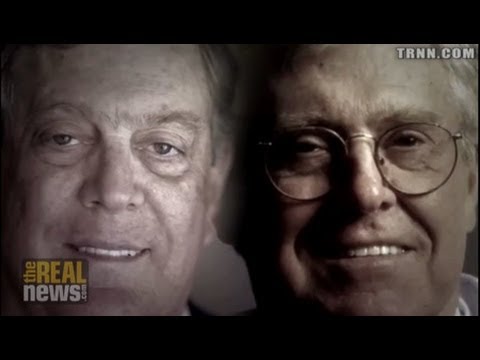 PAUL JAY, SENIOR EDITOR, TRNN: Welcome to The Real News Network. I’m Paul Jay in Baltimore. And welcome to the first of what will be a regular series of interviews with Greg Palast called The Palast Report. He now joins us from New York City.

Greg is a BBC investigative reporter. He writes in The Nation and Vice magazine. He’s the author of the New York Times bestseller The Best Democracy Money Can Buy, and latest book is Billionaires & Ballot Bandits.

Thanks very much for joining us.

GREG PALAST, JOURNALIST AND AUTHOR: Glad to be with you, Paul.

PALAST: Ooh. I’ve been kind of playing with this oozing black snake, this kind of viperous tube of sludge called the XL Keystone Pipeline. And so I’ve been investigating by kind of pushing myself through this sludge pipe and seeing what is stuck in the ooze.

And what I have found here is a fascinating story of the pipeline, the Koch brothers. And the story took me all the way back to Venezuela and Hugo ChÃ¡vez. So that’s what I’m working on right now, this untold story of ChÃ¡vez, the Koch brothers, and the XL.

PALAST: Three big dots. Okay. The XL pipeline, Keystone pipeline, is the proposed pipeline, extension of a pipeline that would take tar sands oil from Canadaâ€”what they do is they have, you know, big bulldozers that rip up the earth, they melt the dirt, they melt the sludge, and there’s this heavy goo that’s kind of like hot asphalt, which they want to move down to refineries, down to Houston, Texas.

And my first question was: what? Why? You know, isn’t Texas where oil comes from? In fact, that’s our big oil-exporting state, is Texas. So why are we taking oil from Canada past the north, the northern interior of the U.S., where we can use heating oil? Why are we taking it down to Houston? [incompr.] to Newcastle to the Gulf coast. And the answer is: Koch.

The Koch brothers are the owners of the big refineries, like the Flint Hills refinery, along the Gulf coast of Texas. And you have to understand, refineries, these kind of giant filth machines, are actually very sensitive instruments. They can’t just suck up and refine any old oil and throw filth into the air; they’re very specialized machines. And the Gulf coast refineries, especially those controlled by the Koch brothers in Flint Hills, can really only handle heavy crude oil.

So the stuff that’s in Texas itself, West Texas crude, which is light and sweet, it’s good oil; it’s not filled with a lot of crappy sulphur. That’s no good for the Texas refineries. Rather, they need that heavy, gunky stuff which is ultrapolluting.

So there is a controversy right now, and there will be a big demonstration against the XL Keystone pipeline on February 17 in Washington.

And I wanted to know why we’re taking oil from Canada across the entire United States to Texas. And, again, it’s because the Kochs want it. Now, why do they want it? The answer is, right now they’re getting their oilâ€”the only place they can get lots of heavy crude oilâ€”if you want heavy crude, you’ve got to get it from a heavy dude named Hugo ChÃ¡vez, the president of Venezuela. And one thing about ChÃ¡vez, who I’ve known for many years, is that he doesn’t let go of his nation’s oil on the cheap. He is a cornerstone of OPEC. And Venezuela’s been selling heavy crude at a premium to the price paid in Texas, because it costs more to get heavy oil from Venezuela than it does to get light oil down the road from Texas. But they have no choice, the Koch brothers, but paying Hugo for his gunky oil.

Now, on the other hand, the Canadians not only are selling for less than Texas oilâ€”they’re selling, as of todayâ€”if you check out this week’s reports, about $33 a barrel less is the price of West Canada Sands (WCS) oil, as they call it, versus WTI, the West Texas Intermediate. So you’re saving about $35 a barrelâ€”$35 a barrelâ€”if you can get the oil from Canada as opposed to Venezuela. So they’ve got to cut off ChÃ¡vez and they’ve got to bring the oil in from Canada.

And that’s the reason why we are talking about endangering the most sensitive aquifers and importantâ€”that is, water sources in Americaâ€”to have a pipe with the filthiest oil in the planet, the most polluting oil on the planet, to drag it all the way from Canada all the way down to Texas so that the Koch brothers at Flint Hills can makeâ€”their savings would be about $2 billion a year that the Koch brothers will make off our risking the aquifers across the United States.

JAY: So is the Koch brothers’ refineryâ€”it was primarily built to deal with Venezuelan oil?

But the way that they make their money is not by, you know, being entrepreneurs or good investors or job creators. Their entire operation, the two brothers Koch, Dave and Charles, each worth over $20 billion, they make their money on political plays. So they’ll take Sunoco, which wasn’t making any money from its refinery in Texas having to buy from Venezuela, they took over Flint Hills and figured, a-ha, we’ll just do the political play. If we can use our political muscle to jam a pipeline through the guts of the United States down to Texasâ€”you know, and most people would think that that’s mad, taking tar oil from Canada and bringing it to the Texas, to the Gulf coastâ€”we can make a killing.

And by the way, they’re making an extra killing. When the Republicans were talking about the XL Keystone pipeline making us energy-independentâ€”first of all, that assumes, by the way, that Canada is a suburb of Seattleâ€”.

JAY: Well, there’s some truth to that, but go on.

It also undermines Hugo ChÃ¡vez. They have to undermine ChÃ¡vez, which they want to do for geopolitical reasons.

But then the oil will not be used in the United States. It will be refined mostly for gasoline that will be sold at a premium in the Caribbean. Remember, these refineries are in the Gulf coast. Selling it, then running that stuff back into New Jersey is not a moneymaker. The way you make the money is you sell gasoline in places that don’t have the refining capacity and will pay a premium, like, you know, Jamaica, Santa Domingo. That’s where your money’s going to be made. So this is oil from Canada which will then go into the Koch refineries and sold into the Caribbean.

And we are paying the price in two waysâ€”one, the massive danger of a break in these pipelines, which happen all the time. And that would be disastrous, given the areas it’s going across. And the second is that because it will now open up new fields in Canada, because it will now make more tar sands finds economic, ’cause they’ll have a market for it, we’re going to have a massive, massive, massive increase in global warming chemicals that will be thrown into the air by the process of both the drilling, the refining, and the ultimate use of this product, which is the absolutely filthiest, filthiest oilâ€”.

JAY: Yeah, I think that Canadian tar sands, I think, is number-one or close to number-one producer of carbon emissions in a single place on the planet.

Now, Obama has not made a decision on this. That is, he was afraid to approve Keystone XL pipeline before the election because he knew he would be lynched by environmentalists and people of Kansas, Nebraska, where the pipeline comes down. But now that the election’s over, look out. In fact, my money would be on Obama approving the Keystone XL. There is a tremendous amount of pressure from the Koch brothers and from other oil interests, plus it plays into the administration’s game of a widescale attack on Hugo ChÃ¡zez. And that, by the way, includes the choice of John Kerry, who started this week as our new secretary of state.

Senator Ketchup isâ€”remember, his fortune is based on marrying into Mrs. Ketchup, Mrs. Heinz, and Heinz has had a running battle with Venezuela because Heinz property was confiscated by ChÃ¡vez’s government in a land-reform move. So, you know, if yourâ€”those tomatoes going into those bottles have nowâ€”those plants, ketchup plants were taken over by the ChÃ¡vez government for the workers there. And so John Kerry is a longtime ChÃ¡vez hater.

This administration has totally swallowed, repeated, and amplified the anti-Venezuelan propaganda and foreign policy of George Bush.

JAY: Alright. Thanks very much, Greg. And Greg will be back in a couple of weeks to tell us what he’s working on. Thanks for joining us.