Gore Vidal on US Media and Society (4/7)

Gore Vidal discusses taboo subjects in the media and society, and says the people have no voice because they have no information

Gore Vidal discusses taboo subjects in the media and society, and says the people have no voice because they have no information 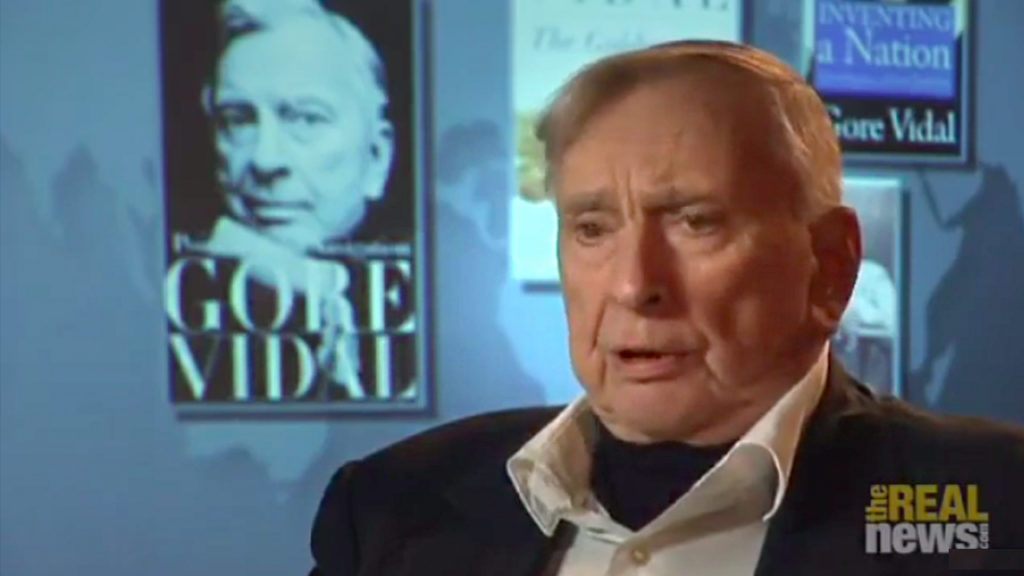 PAUL JAY: There’s a lot of taboo subjects in the media, and even sometimes in the society.

GORE VIDAL: Particularly in the society.

PAUL JAY: Yeah. But one of them is trying to draw any historical lessons from the rise of fascism in Germany, in Italy, and say there’s anything in common.

PAUL JAY: Fascism in Germany wasn’t a coup; it was a many-year process. [crosstalk] feel normal. I’m not suggesting we’re living in an equivalent period, but there are lessons to be learned about it.

GORE VIDAL: But it is equivalent. I mean, don’t be shy of saying that. The response to the Reichstag Fire is precisely that to 9/11, which was invoked by this administration’s people. And if we don’t fight them over there, we got to fight ’em here. This little fool. How are they going to get here? Greyhound bus? I mean, he is so stupid himself that he assumes everybody else is equally stupid. If he had been really elected, I would say everybody else was stupid, but he wasn’t.

PAUL JAY: But the party that was really elected went along with most of what he did until very recently.

GORE VIDAL: Oh, he didn’t do much of anything. They went along applauding it because they were getting huge contracts for Halliburton.

GORE VIDAL: Have you ever found them? You know where they live?

PAUL JAY: The leadership of the Democratic Party?

GORE VIDAL: They’re like rocks. You know, they’re not visible. There’s some obviously good people in the party. I like Dennis Kucinich, I like Senator Leahy. There are some very good people in Congress. And lets hope they start doing some oversight. But I’m not very sanguine.

PAUL JAY: In the period between 9/11 and Katrina, where in Katrina some cracks started to appear in the Bush armor, we saw a kind of capitulation by American media and all the opposition political leadership. And you saw a face of America that we might see more of.

GORE VIDAL: After all, you are in opposition to American media, and so am I. And we know how false it is, and how corrupt it is, and how engaged they are for mischief, making money for the ownership of the country. There’s nothing to be done about them. And no wonder, even when the American people might ever again, which I doubt, have an uncorrupted presidential election. 2000 was corrupted. 2004 was corrupted. I don’t think we’ll ever get to know the people’s voice, and the people have no voice because they have no information. That is why you’re doing useful work here. That’s why I’m chatting with you here. That could be useful, to tell them actually what happens around the world. That poor guy running for Congress, everybody jumped on him, particularly [inaudible] people. He suggested that our foreign policy might have had something to do with 9/11, that we were deeply disliked in the Muslim world for other reasons. It’s the same presidential, I guess. ‘Do you believe in evolution?’ said this idiot. I mean, to reveal the leadership of the United States hasn’t made it to the 20th century, that our leadership is as ignorant as that. Five of them said, no, no, thinking little lord Jesus was going to vote for them.

PAUL JAY: It’s in these moments of crisis, like terrorist attack, that you start to see people’s colors.

PAUL JAY: In Britain as well, and I was really taken aback. After the bus London bombings, Ken Livingstone, I read Ken Livingstone was asked, was there any connection between these bombings and UK foreign policy, and he said there’s no connection whatsoever. This is just people that hate our way of life.

GORE VIDAL: Yeah, that’s the new lie that they like to tell. Well, that’s Bush all over. They just hate us. Why? Nobody has to ask them why. He doesn’t know why. Well, they envy us, our form of government. Who envies us that can of worms we’ve got in Washington? And it’s been many years in the United States since I have seen a Norwegian coming to get a green card.

Gore Vidal is the author of twenty-two novels and has written films including the classics Ben-Hur and Suddenly, Last Summer. He is recently the author of The Last Empire and Inventing a Nation.