Vidal: "I was born 80 years ago in a country called the United States of America, and now I live in a Homeland--an expression we haven't heard since Hitler."

Vidal: "I was born 80 years ago in a country called the United States of America, and now I live in a Homeland--an expression we haven't heard since Hitler." 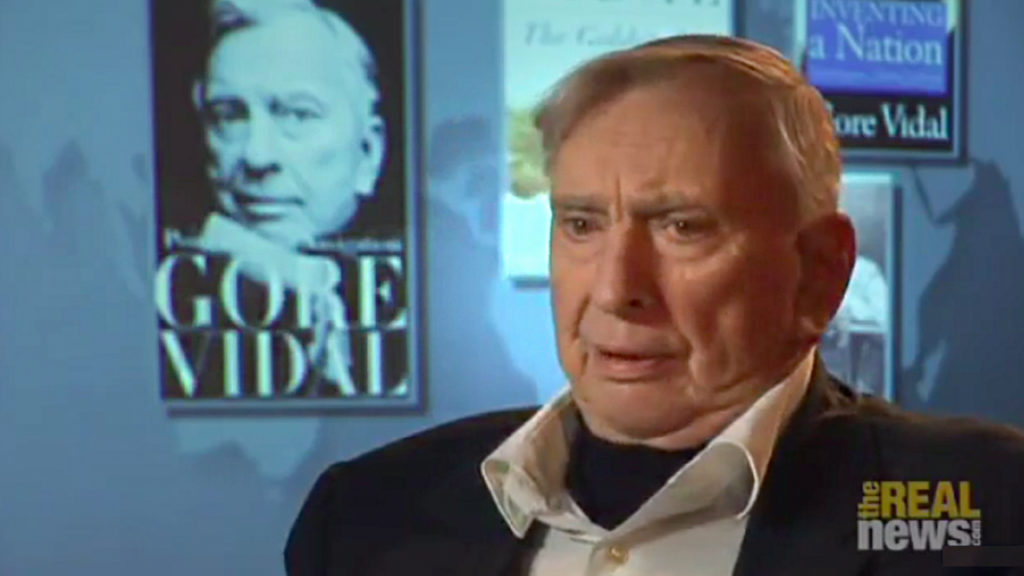 PAUL JAY: How significantly different would a Clinton White House, Obama White House, or an Edwards White House- how much can they do? How much do they want to do differently?

PAUL JAY: There’s a group of ex-Reagan conservatives that are waging a campaign exactly along these lines, saying the Constitution must be reclaimed. In fact, they’re making more of it than the leadership of the Democratic Party is.

GORE VIDAL: Well, do they have the same Constitution in mind? Or do they have something else in mind? One never knows with marginal groups. I think the Reagan people just believed in you make as much money as you can, and screw everybody else.

PAUL JAY: This gang seems to be. They’re certainly talking the talk of wanting to defend habeas corpus and the Constitution. But more my point is we’re hearing very little of this from the Democratic Party.

GORE VIDAL: Well, there’s Dennis Kucinich. There are a lot of people, Senator Leahy, Congressman Conyers, there are a lot of people who understand the Constitution and understand the risks of dictatorship, because we’re right on the edge of it. I tell people, Europeans, that say, you know, ‘What do you think of the regime?’ I said, well, what they’ve done is interesting. Symbolic. I said, I was born 80 years ago in a country called the United States of America, and I now live in a Homeland. It’s an expression we haven’t heard since Hitler. Since they don’t know anything about language or politics or thought or anything else, they think this is a wonderful way of explaining the United States defending itself against its numerous inscrutable enemies. They hate us. We don’t know why. Well, if we didn’t blow up their cities, they might feel more kindly towards us. Two plus two is not possible in the United States of Alzheimer’s.

PAUL JAY: What do you see in the next ten, fifteen years?

GORE VIDAL: Bankruptcy for the nation, which will put an end to these insane wars. We can’t afford one. I know in Washington, I mean, the entire Bush gang is longing to reconstitute the army with another million men, and it can’t find a million men. And the American people, although they can be easily tricked, they’re not stupid, and they’re not enlisting.

PAUL JAY: Those who’ve been more or less running the world for the last 50, 60 years or more, how do they deal with the situation where they might not run the world anymore?

GORE VIDAL: Well, martial law would be the first step that they would take to get back their powers. It’s always a good one, always an easy one. They have all sorts of models, they think, in Abraham Lincoln, but he certainly ruled with dictatorial powers, but the Constitution allowed him to do that, and he was faced with the dissolution of his country, which he cared a lot about. There’s nobody in this administration who knows anything about the United States. They don’t know the history. They certainly do not wish the people well. If you ever talk to Republicans privately about that- this is elected officials- their opinion of the people, their contempt is so total. And if you’re on their side, you’re a softhearted liberal or you’ve been taken in.

PAUL JAY: What do you see as the response coming from the people in the next ten, fifteen years?

PAUL JAY: How will people respond?

GORE VIDAL: Well, there could be rioting. Certainly when we saw what happened in the late ’20s, early ’30s, institutions collapsed, banks collapsed, and Roosevelt’s swift actions followed by the brains of Lord Keynes changed the whole economic structure of the West, much less the United States. So we were lucky, between Keynes and Roosevelt, to have had two such extraordinary men who did have our interests at heart, or at least appeared to.

Gore Vidal is the author of twenty-two novels and has written films including the classics Ben-Hur and Suddenly, Last Summer. He is recently the author of The Last Empire and Inventing a Nation.