In his UN speech, Benjamin Netanyahu mentioned Iran 37 times but spoke about Palestine only twice, deflecting attention away from the occupation and giving Israel an external enemy, says Haaretz journalist Gideon Levy

In his UN speech, Benjamin Netanyahu mentioned Iran 37 times but spoke about Palestine only twice, deflecting attention away from the occupation and giving Israel an external enemy, says Haaretz journalist Gideon Levy

The Real News on the Middle East 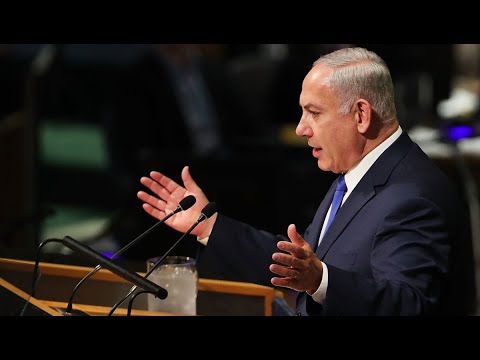 AARON MATÉ: It’s The Real News, I’m Aaron Maté. At the UN this week, President Donald Trump and Israeli Prime Minister Benjamin Netanyahu showcased their shared priorities on the Middle East. Both leaders made threats and bellicose statements towards Iran. Netanyahu mentioned Iran 37 times, but mentioned the Palestinians just twice. Trump, meanwhile, also made threats to Iran, but didn’t mention the Palestinians even once. Gideon Levy is a veteran Israeli journalist with the newspaper Haaretz, and he joins me now. Welcome, Gideon.

GIDEON LEVY: Thank you. My pleasure.

AARON MATÉ: Let’s start with playing a little bit of what Netanyahu said. He spoke after Trump, and he began by praising Trump’s words.

Netanyahu: None were bolder, none were more courageous and forthright than the one delivered by President Trump today. President Trump rightly called the nuclear deal with Iran … He called it an embarrassment. Well, I couldn’t agree with him more, and here’s why: Iran vows to destroy my country every day, including by its chief of staff the other day. Iran is conducting a campaign of conquest across the Middle East, and Iran is developing ballistic missiles to threaten the entire world. Two years ago, I stood here and explained why the Iranian nuclear deal not only doesn’t block Iran’s path to the bomb, but actually paves it.

AARON MATÉ: So that’s Netanyahu speaking at the UN this week. Gideon Levy, as I mentioned, Netanyahu made 37 references to Iran, just two to the Palestinians — what did you hear from him in his address?

GIDEON LEVY: Netanyahu spoke about an embarrassment, and I must tell you that there’s nothing more embarrassing than to know that the man who handled this speech is the prime minister of my country. It was really an embarrassing guest speech, I must say. First of all, that finally Donald Trump has a friend in the world. I mean, the whole world is embarrassed by Donald Trump — half of America doesn’t know where to hide out of shame because of this man, and here comes the prime minister of Israel, the only prime minister in the world today who will praise and flutter Donald Trump like he did. No other statesman in the world would talk like him, and it is embarrassing me as an Israeli. And finally, it’s a great embarrassment for me to realize that my prime minister lives in a total denial. There’s a huge elephant in the room, and the elephant is called the Israeli Occupation, which is now celebrating, say, 50 years, and the Israeli prime minister doesn’t even mention it. Doesn’t even recognize the fact that there is an occupation. So, what is more embarrassing than this?

AARON MATÉ: Well, let me ask you a question. Do you think part of the reason why Netanyahu was so focused on Iran is because it helps him deflect attention from the occupation that he doesn’t want to acknowledge?

GIDEON LEVY: There is no other reason — what do you mean? That’s the only reason that Netanyahu has-

AARON MATÉ: Well, look, in his case, though, he will point to the statements from Iran. There’s what Ahmadinejad said years ago about Israel, and whenever someone from Iran says something bellicose towards Israel, Netanyahu will seize on that and say that this is why we have to focus on Iran because they’re a threat to us, they want to destroy us.

GIDEON LEVY: Iran is a threat, but much a smaller threat than Netanyahu makes it. This demonization, and above all, this exaggeration has only domestic motivation, and Netanyahu needs an external enemy, and what is better than to create this monster, Iran? The deal with Iran everyone knows is the best deal that could have been achieved. It gives the world and Israel 10 years now of full security, and to go now and to try to sabotage this deal is really a dangerous game, because the alternative might be a war. You know, It’s not a small thing if, God forbid, there will be a war between Israel and Iran, or United States, Israel, and Iran. We’re not dealing here with the Hamas in Gaza, which Israel can bomb and finish their power within days. We are dealing here with a regional superpower, so therefore one should be very careful about Iran. I don’t want to underestimate the threat, but by the end of the day this threat is very well controlled by the agreement and we should stick to the agreement.

AARON MATÉ: Right, and I don’t want to overstate the threat, if any, from Iran either. Iran has actually never threatened to bomb Israel. Israel and the U.S. have threatened to bomb Iran many times. Iran has said, also, that it would respect any outcome to the Israel-Palestine peace conflict so long as the Palestinian people supported it in a referendum whatever they decide. So, I agree with you that whatever statements have come from Iran, they don’t nearly match … They don’t come anywhere close to how they’re portrayed by leaders like Netanyahu. How did his speech play at home in Israel?

GIDEON LEVY: There is a big exaggeration in Israel about the importance of those UN speeches, while in no other country it’s even an issue what the Prime Minister or the President says or doesn’t say in the UN. Israel is playing a double game — on one hand, we always say that the UN is totally unimportant and the UN is totally irrelevant. On the other hand, we have this annual ritual of, “The Prime Minister’s speech in the UN is in the whole world.” Most of the Israelis believe that the whole world had nothing to do last Thursday evening but to sit and watch the speech of Netanyahu. There was only one thing which disturbed this time — this huge success — and this was the fact that Netanyahu was late into hours. I mean, not his fault, but he missed the prime time on TV in two hours, so many of Israelis were watching it not like any other year in which it was always planned to be in the prime time.

AARON MATÉ: Speaking of the UN, Netanyahu called it, “The epicenter of global antisemitism.” What’s he trying to do there?

GIDEON LEVY: Yeah, listen, for Netanyahu any criticism on Israelis is immediately labeled as antisemitism. It’s a very efficient way to release ourselves from any responsibility. You know, for people like Netanyahu, Israel is doing only justice. Israel is only following the international law. There is no occupation, there is no suffering of the people for 50 years now, there’s no brutality, no violence — nothing– but antisemitism of the world against Israel. It’s a very cynical game, which has very, very little to do with reality.

AARON MATÉ: Let’s talk about Mahmoud Abbas. He also spoke this week to the UN General Assembly, and he put the one-state solution on the table saying that, “Because Israel is undermining the two-state solution, a one-state solution might be Palestine’s only option.” What did you make of what he said to the UN?

AARON MATÉ: What do you think is the most effective way to reach Israelis right now? There is a global movement to boycott Israel until it complies with international law. Has that had any impact on Israelis right now? What can people on the outside do to get across the message that the occupation is not tolerable?

GIDEON LEVY: The Israelis have no incentive right now to go for any kind of change because life in Israel is quite good. The denial and the brainwash is in levels that really … people who come here don’t believe in which denial the Israeli society is living and how deep is its brainwash. So, those are conditions in which you can’t expect any kind of change from within Israel, and therefore the only way to really shake the Israeli society is by making it accountable and making it pay for the crimes of the occupation. As long as any Israeli is not paying by himself, personally, and take accountability [inaudible 00:10:14] for the occupation. As long as this will not happen, there will be no change.