Presidential Guard Behind the Coup in Burkina Faso 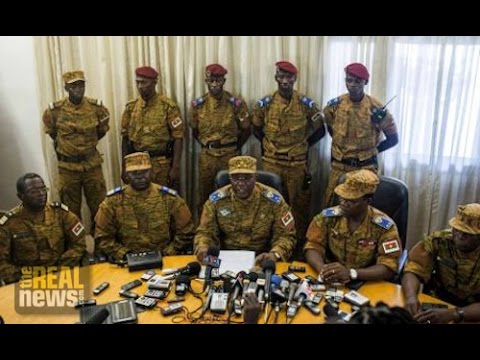 There was a military coup in Burkina Faso on Thursday. Here’s a clip of Lt. Col. Mamadu Bamba announcing it on national television.

PERIES: The coup has killed at least ten people, as far as we know. I’m joined by Gnaka Lagoke. He’s a specialist in African political affairs, development, and pan-Africanism. He also founded the revival of the Pan-Africanism Forum. Thank you so much for joining me today.

PERIES: So let’s start with what happened yesterday, what led to the announcement on national television.

LAGOKE: Yesterday we heard that there was a mutiny in Burkina Faso. That the presidential guard of Burkina Faso, which was a particular force created by Blaise Compaore, and loyal to him. And was, leader was Gilbert Diendere, decided to take as hostage the president of the country and also took hostage the prime minister Zida, who is the military [inaud.], who by the way was a member of the same presidential guard. This is what we know since yesterday.

PERIES: So let’s just go back a bit. Now, Compaore was ousted last year in a basically revolt, by the people asking him to leave. So he was forced to resign. Now, take us back to that day, and what has happened over the last year.

LAGOKE: I will be brief. Compaore was taken out of power on October 31, 2014, by a popular uprising. More than a million people in Burkina, Banfora, Ouahigouya, and different cities in Burkina Faso, because he wanted to change the constitution to indefinitely being in power in Burkina Faso. So the people in Burkina Faso took to the street and said no, enough was enough. Blaise Compaore now is in the Ivory Coast. And then is sheltered by Alassane Ouattara, that he helped become the president of the country.

So since the tradition Burkina Faso has been trying to put together new rules and a new process by which the people of Burkina Faso can come together and define, write a new charter, for the new democratic Burkina Faso. And we know that Blaise Compaore and Gilbert Diendere and the presidential guard, they have tried several times to oppose and derail the process. And then today, or yesterday, we saw that this time they seemed to be successful as when they took the president, the prime minister as hostages, we realized that, you know, it was in fact a basic coup d’etat that we’ve been witness in that regard, since [inaud.] times.

PERIES: Now, this most recent coup is related to the elections that are supposed to take place next month. But the, at least the presidential guard seems to be unhappy with the rules of the new election process, essentially eliminating people that were a part of the Compaore government. Give us a little bit more insight into that.

LAGOKE: Yes and no, because Gilbert Diendere–Gilbert Diendere, for those that know the history of Burkina Faso, has been involved in different situations in the country. He was with Blaise Compaore in [Thomas Sankara] in 1983, and then later on he was the one, according to some credible sources, that people went and he killed Thomas Sankara, was under his leadership. And then since that time he’s been elected [loyal]–and loyal servant of Blaise Compaore for more than 27 years.

Now, even if everything was supposed to go right I knew–you know that Diendere was going to do everything possible to derail, because he is fighting for his own survival and because he believes that he can be the rightful president of Burkina Faso after he served Thomas Sankara and Blaise Compaore. That’s the reality people need to see.

Now, the transition decided that the people were involved, they’d also be imprisoned because they are [inaud.] and they are [crooks] and they are bandits, and because they have been destroying not only Burkina Faso but the entire [subdivision] of West Africa. The people of Burkina Faso, there are some who thought that they should be in prison. And in the name of, the spirit of reconciliation they decided not to persecute them. And I believe that that was a mistake. And then today they’re coming back in order–after every revolution there is a counterrevolution.

So this is what we’re seeing today in the case of Burkina Faso. So they can use the fact that some people [inaud.] for the position risk as a pretext. But the reality is that they do not want to revolution to succeed in Burkina Faso. And if it succeeds it’s going to have an impact on the [subdivision] of West Africa and on the entire continent of Africa. That’s the reality, that’s the real game that we’ve been seeing in Burkina Faso.

PERIES: Now, the objective here is democratic rule. However we have a military rule, and has been more or less even in the transitional format, the military has played a critical role. Now, they are the ones that have now organized this coup. So give us a sense of what the role of the military is, and is their objective to remain very close to the leadership and have control over what’s happening in Burkina Faso?

LAGOKE: The presidential guard, you know, as the presidential guard was loyal to Blaise and is loyal to Blaise, so they have wanted–you know, it is their way or no way. And then when we talk about democracy, and national reconciliation, and the democratic process–and then you have to be inclusive, and then people have to talk in the name of truth, and people wanted to know what happened on October 15, 1987 when Thomas Sankara was killed.

But we don’t know yet if the entire army is going to rally around them, or if the entire army is going to support them. But because we believe that the reality on the ground in Burkina Faso, thanks to what we saw recently last year, we believe that there is strong, strong desire from the people of Burkina Faso to really write a new chapter, a better Burkina Faso. And it’s going to be difficult for Diendere or whoever is going to be in power. So we just–we heard that they burned already his house. And there was a rumor that somebody was supposed to become the prime minister. [Inaud.] the people, despite the fact that there’s a curfew, they went to burn down the house of the person to put, supposed to be the prime minister. So people are organizing little by little.

PERIES: Now, there was some speculation in the media that this elite presidential guard anticipated that if the elections take place and Burkina Faso goes back to democratic rule with the president and a non-military vice president and prime minister and so on, that they would be sidelined.

So people–some people may say yes, you know, they should have allowed everyone to run. I think it was [not going] to be, it was not going to be the solution anyway. Because what they’re doing today, they are going to try and do it maybe in one year, or down the line one year or two years. Because they want to be in power, and they want the system to be there forever.

PERIES: So all of this is going on in the presidential palace, and in terms of the government. But what other organizing efforts are taking place? A million people marched last October to oust Compaore. Where are they today?

LAGOKE: Beautiful question. This time things seem to be a little bit different, because people were taken by surprise to see that the presidential guard decided to take the president of the country as an hostage. So 24 hours, people did not know what to do. So they–now they seem to do, to come back to the reality, that they have to organize, and because it’s a military coup.

And we know, we heard that Radio Omega, which is like a popular radio that organized the resistance against Blaise Comapore, has been burned down by the presidential guard. And Smokey, the rapper, leader of the Civic Broom Movement, his studio–because he is a musician and artist, his studio [inaud.] was also burned down by the presidential guard. You heard that some [inaud.] is a reggae singer, I heard this morning that he was arrested. So–in front of the house of the Sankara family you can see military–I spoke to the sister [inaud.] this morning. She could not even come out of the place because she heard that people in the street had been killed.

But there’s a buildup. And then the unions, the political parties, people are trying to gather here and there, then disperse and beaten by the presidential guard. But I believe and I am confident in the power of mobilization of the very people who last year, who are together one million people. This time it’s going to be more challenging, but I believe that they will prevail, and I believe that they will overcome, because what they’re doing is not just for Burkina Faso but is for the entire continent of Africa. So this is what I wanted to [update] [inaud.]

PERIES: Gnaka Lagoke, thank you so much for joining us today.

LAGOKE: Thank you very much. Thanks for the opportunity.