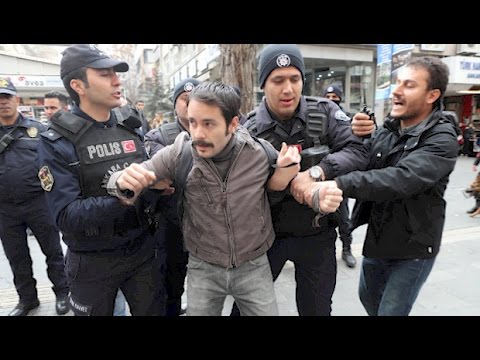 Sharmini Peries: It’s The Real News Network, I’m Sharmini Peries, coming to you from Baltimore. On international Workers Day, also known as May Day, the government of president Tayyip Erdogan cracked down on demonstrators, arresting over 200 of them. The government said the demonstrators had Molotov cocktails and grenades. People on the ground say the demonstration was rather peaceful and there was no such disruptions. This May Day repression follows the firing of 3900 civil servants last weekend and blocking off the website Wikipedia. On April 16th, president Erdogan narrowly won a referendum allowing him to turn Turkey’s political system from a parliamentary democracy to a presidential system, allowing him to further consolidate his powers.

Joining us to analyze the situation in Turkey, is Guney Isikara. He is a PHD student in economics at The New School for Social Research and recently authored a piece in Jacobin Magazine titled 10 Thoughts On The Turkish Referendum. Guney, very very good to have you with us.

Guney Isikara:      Well, thank you. Thank you for having me.

Sharmini Peries: Guney, what’s happened since the April 16 constitutional reform referendum. Erdogan won but Turks are accepting the results or are they challenging it?

Guney Isikara:      Actually there is a significant amount of anger and displeasure among the people, especially among those who have voted no because estimates indicate that this time there was a significant effect of electoral fraud on the result of the referendum. The situation is the following, each ballots and each seal is required to have the official stamp of the high election council in the country and on Sunday, on the day of the referendum, the council announced that it will also count those seals and those ballots without the official stamp of the council itself, also valid and approximately two to two point five million such ballots were counted as valid.

Certain research are indicating that most of these ballots and seals come from the Kurdish cities where under that state of emergency. The observers of the HTP Peoples Democracy, the pro Kurdish left wing party and of the CHP were not allowed to the classrooms, were not allowed to be a part of the election commissions. In the social media, we have so many videos being circulated that actually show that most of those unstamped seals and ballots were actually yes votes. As I said, there is a significant anger and displeasure among the people. People have been protesting, especially some local protests have been ongoing in some strongholds of the left and the Kurdish people in big cities in Istanbul and some other cities.

Interestingly, the oppositional party, the Republicans Peoples party CHP, said that it is not supporting the street protests officially, which was kind of unexpected. The only party which is still supporting the street protests is the HTPD, The Post Democratic Party and it’s spokesperson today just said that talking about the presidential election in 2019 is actually not possible at all. It means implicitly recognizing the results of the electoral fraud. They are not going to do that but the extent of protest is going down because time is passing by and other political themes are coming up but still there is dissatisfaction among the people.

Sharmini Peries: So then in effect, now that Erdogan actually has consolidated his power and he’s moving towards a centralized power system. Why is he still cracking down on civil servants protesters, websites such as Wikipedia?

Guney Isikara:      Actually even the result of the referendum was kind of disappointing for Erdogan because I think he and his league were expecting a much higher yes vote in the referendum. It was only 51 percent in spite of the facts that they literally made available all the state resources, there was a significant problem of impartiality during the campaign process. All state officials, even villages officials were campaigning for yes and all the media outlets were actively campaigning for yes. On the other hand, the no campaign was being actively hindered. Hundreds of no campaigners were being detained and also arrested and 12 members of parliament including the two co-chairs of Peoples Democratic Party, had been already imprisoned months before, months in advance before the referendum. Despite all these factors, only a 51 percent was quite disappointing for Erdogan.

Taking into account, that actually the yes campaign, the yes block consisted of the ATP, the ruling which had almost 50 percent in the last general election in November 2015. Plus the fascist right extreme MHP, which had around 12, 13 percent back in 2015, so they were expecting something closer to 60 percent. It was very close to 50 percent and despite the fraud. The means that actually Erdogan had significant problems in terms of reproducing his power and especially his [inaudible 00:06:19] throughout society and convincing people for his dictatorial presidential system.

It of course also indicates that the distance is going to stay on the one hand, until the presidential election in 2019 and on the other hand, we have clear indications of cracks within the [inaudible 00:06:41] in Turkey. It is not even sure that Erdogan can make it to the presidency or he can even stay in power until the election in 2019. I think that’s one of the answers why he’s still trying to console the 18th power and also [inaudible 00:07:04] basis by making use of this, on the one hand chauvinistic narrative against the entire world, especially against the so called west, and on the other hand trying to silence any kind of oppositional voice within the country.

Sharmini Peries: Great. Speaking of his critique of the west, on Wednesday, president Erdogan met with president Putin of Russia and the two agreed to restart trade between the two countries and I know this is not the first time they’ve gotten together and talked about enhancing trade relations particularly given after that incident with the shooting of the Russian airplane, actual trade relations, and tourism in Turkey and all of that declined between Russia and Turkey. Now it seems that they are reviving their collaborations and in fact discussed a safe zone in Syria as well. Is Erdogan in this new consolidated power that he has, trying to also move away from Europe and his western alliances with the United States and develop a closer relationship with Russia?

Guney Isikara: Well actually, he has been doing that for some time. The politics of Turkey regarding this Syrian civil war has been actually the history of magnificent u-turns, it was unbelievable since the get go. The aim was supposedly to overthrow the Assad regime and establish a democratic regime in Syria which was of course not the case because we know that the Turkish regime actively supported Jihadist fighters against the Assad regime in Syria. Actually first and foremost aim of Turkey was to hinder the establishment of a Kurdish autonomous region in northern Syria in Rojava and it is still trying to deliberately and desperately avoid the establishment of the Kurdish autonomous region. For that purpose, it is going back and forth between the United States NATO block on the one hand, and Iran and Russia on the other hand.

I think the recent meeting with Putin was not really about some economic agreements but as you said, it was concerned much more with the future developments in Syria. It is still a question mark because a couple of weeks ago when president Trump suddenly announced that they would be likely to overthrow Assad, then Erdogan was the person … If there was anyone who was waiting for this, who has been waiting for this decision for years, it was Erdogan and he immediately welcomed it and he said “We are ready to work with the United States”, and he is now coming to the United States in 10 or 11 days to visit Donald Trump in the White House.

I think Turkey doesn’t have a sustained policy in terms of Syria, at least in terms of opting between the Russian/Iran block and the United States/NATO block. What’s happening is, whatever it does, it does it by overestimating it’s own power. When it tries to overthrow Assad, it basically upsets Russia and Iran and when it tries to politically reorganize Syria and intervene within the Kurdish region militarily, politically it upsets the United States so that’s why I called this politics of Turkey desperate.

From a more long term point of view, I don’t think it will be easy for Turkey to take a real distance from the NATO block because it has been the closest ally of the United States and the most important military force of the NATO block in the region since early 1950’s and it has extremely important economic relationships with the so called western block. Almost 80 percent of all foreign direct investment flowing into Turkey comes from the European Union and it is not easy to suddenly leave that block and switch to a more Eurasian Russian/Iranian block.

Guney Isikara:      Thank you, thank you for having me.

Guney Isikara is an independent journalist and translator, and a PhD student in the Economics Department at the New School for Social Research in New York. He is also a contributor to Jacobin Magazine.