In defending Gen. Kelly's praise for Robert E. Lee and his view that the Civil War arose from "the lack of an ability to compromise," the White House's white supremacist sympathies are again on display. We speak to historian Gerald Horne.

In defending Gen. Kelly's praise for Robert E. Lee and his view that the Civil War arose from "the lack of an ability to compromise," the White House's white supremacist sympathies are again on display. We speak to historian Gerald Horne. 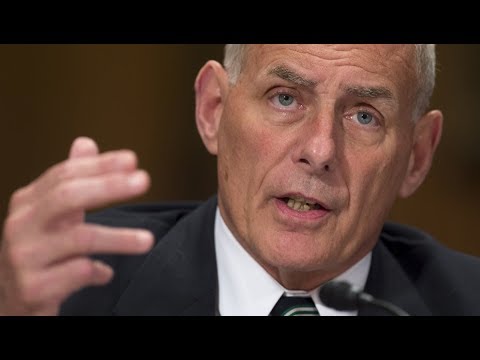 JOHN KELLY: I would tell you that Robert E. Lee was an honorable man, he was a man that gave up his country to fight for his state, which in 150 years ago was more important than country. It was always loyalty to state first back in those days. Now it’s different today, but the lack of an ability to compromise led to the Civil War and men and women of good faith on both sides made their stand where their conscience had them make their stand.

AARON MATÉ: Just to correct myself, as you heard he called him “an honorable man”, not “a good man”. Kelly’s comments sparked outrage, but instead of an apology, the White House today stood by his comments.

S. H. SANDERS: I don’t know that I’m going to get into debating the Civil War, but I do know that many historians including Shelby Foote and Ken Burns’s famous Civil War documentary agree that a failure to compromise was the cause of the Civil War. There are a lot of historians that think that and there are a lot of different versions of those compromise. I’m not going to get up here and re-litigate the Civil War, but there’s certainly I think some historical documentation that many people, and there’s pretty strong consensus, people from the left, the right, the north and the south, that believe that if some of the individuals engaged had been willing to come to some compromises on different things then it may not have occurred.

AARON MATÉ: These latest words from the White House come days after white supremacists held a white lives matter rally in Shelbyville Tennessee. Joining me is Gerald Horne, historian and professor of History and African American Studies at the University of Houston. Professor Horne, welcome. I guess I’ll ask you to respond to general Kelly’s comments and then also this followup from White House press secretary Sarah Huckabee Sanders today that there’s some kind of consensus across the spectrum amongst historians that this idea that a compromise could’ve averted the civil war is correct.

GERALD HORNE: Well first of all, there is a consensus amongst neo-Confederate historians that substantiate what general Kelly said. You know that quite recently, senator Bob Corker of Tennessee referred to the White House as an “adult day care center.” We had thought that that adult day care center had one occupant, that is to say the chief executive who now occupies the Oval Office. We see now that the man we thought was one of his minders, general Kelly, is an actually an occupant of this adult day care center himself because what he represented was the reality that obviously he did not attend history class in the fourth grade. Indeed, he did not attend history class in kindergarten. If he had, he would’ve learned about something called the Missouri Compromise of 1820 which sought to bridge the unbridgeable gap between slaves and slave owners by allowing Missouri to enter the union as a slave state and allowing Maine to enter the union as a so called free state.

Up to 1860 and 1861 when the Civil War erupted, there were numerous attempts to have compromises including enacting a so called ‘Fugitive Slave Law’ that compelled states like New York and New Jersey to return enslaved Africans who had fled Dixie to Dixie despite the fact we are repeatedly told by those in Dixie to this very day and certainly then that states’ rights, that is to say the states’ rights to own enslaved Africans, was the heart and soul of their project including in 2017.

Now, I think we should be clear that this is not just a misstep by general Kelly or just a misstatement of history. What he’s trying to do is much more nefarious. He’s trying to pave the way for the resurgence of these so called white nationalists, these white supremacists, who marched in Charlottesville Virginia just six weeks ago and are then off going and posing their…from the Atlantic to the Pacific. That is precisely what is at stake as we speak.

AARON MATÉ: I want to go to one more clip of Kelly from that Fox News interview where he had some words to say about history in general and looking back on experiences from the past. This is what he said.

JOHN KELLY: There’s certain things in history that were not so good and other things that were very, very good. I think we make a mistake though in, as a society and certainly as individuals, when we take what is today accepted as right and wrong and go back 100, 200, 300 years or more and say what those, what Christopher Columbus did was wrong 500 years later. It’s inconceivable to me that you would take what we think now and apply it back then. I think it’s just very, very dangerous and it shows you how much of a lack of appreciation of history and what history is-

AARON MATÉ: So, that’s Kelly saying that it’s inconceivable to look back with a moral judgment on the actions of someone like Christopher Columbus, who sparked the genocide of the North American continent’s indigenous population. Professor Horne, as a historian, I’m wondering your thoughts about Kelly’s words there about history.

GERALD HORNE: Well obviously Mr. Kelly needs to return to elementary school. Not only that, but what he says reeks of hypocrisy. Recall that it was not so long ago that the United States was instructing the citizens of what was then called Yugoslavia about the mandate and necessity to face their history no matter how ugly it might be so that it can advance into the future. On this, the 100th anniversary of the Russian revolution, the United States is instructing Moscow to face its history no matter how ugly it might be. With regard to United States however, we’re supposed to cover up history. We’re supposed to forget the fact that the seizing of North America was one of the largest thefts in the history of humankind to the point where there should be a yellow police tape surrounding the entire border of the United States of America.

Not only that, but the double standard is even more insidious because it’s not even applied consistently by its very definition. For example today, we’re marking the 500th anniversary of Martin Luther nailing his 95 theses on the doors of a Catholic church in Germany. Now, most of the analyses that we’ve seen thus far, even though they talk about Martin Luther’s role in Protestant faith, do not shrink from denouncing his antisemitism and denouncing his bias against Jewish people. But somehow, in the United States, we’re supposed to forget about genocide against Native Americans, we’re supposed to forget about the mass enslavement of Africans, and once again I don’t think this is just a misstep of history. It is in sync with a more pernicious strategy of seeking to pave the way for the resurgence of white supremacists and white nationalists who once again marched in Charlottesville some six odd weeks ago.

AARON MATÉ: Professor Horne, going back to something you said earlier about how in fact contrary to what Kelley said, compromises were made well ahead of the Civil War. This is also a point that the writer Ta-Nehisi Coates made today on Twitter, and he pointed out that Abraham Lincoln even agreed to pay reparations to slave owners in a bid to make a deal with them. So why weren’t these, or how were these so called compromise efforts by Lincoln, not sufficient for the south?

GERALD HORNE: Well, you need to realize that even though it might be forgotten conveniently in 2017, those who spearheaded the secession of the so called Confederate States of America in 1861 thought with good reason that they were marching in the footsteps of those who seceded from the British empire in 1776. The secession from the British empire was driven in no small measure by the desire to continue the enslavement of Africans which George Washington and company thought had been jeopardized by Somerset’s case in London in June 1772 which abolished slavery in England. They thought that decision would leap across the Atlantic to imperil their vast fortunes in the bodies of Africans, so they seceded.

Keep in mind as well that in 1836 Sam Houston and Steve Austin in Texas seceded from Mexico because Mexico in the 1820s had abolished slavery, and Mexico in the 1820s even had a president of African descent, Vicente Guerrero. Therefore, in 1861, the so called Confederate States of America were in no mood to accept a compromise. They thought that they were on the right side of history and silently and unfortunately and tragically that thumbnail sketch of history I’ve just outlined for you has been forgotten conveniently not least by occupant number two John Kelley in the adult day care center known as the White House.

AARON MATÉ: And the irony here professor Horne, I’m wondering if you can comment on that, for so many months now we’ve heard general Kelley referred to as one of the so called “adults in the room,” this sober voice of reason who was going to keep Trump in check. I’m wondering your thoughts on that and the historical parallels of that, and whether we’ve seen a similar dynamic before where so many people have put their faith in the officials around the president hoping that they will keep the president in check.

GERALD HORNE: Well obviously that’s laughable. The fact of the matter is that Mr. Trump was voted into office by 63 million people who are staying with him even though his campaign chairman has just been indicted and a foreign policy adviser has just plead guilty to lying to the FBI. I think that we would be naïve if we thought that those 63 million, including general Kelly by the way, are simply victims of false consciousness. I think that those 63 million in a sense have an acute though distorted view of history where they recognize, contrary to the opinion of some of our liberal and progressive friends, that history does not always move forward, it can move backwards. And therefore you can have the clock of history turn back. And I daresay that is the prime agenda of Mr. Trump in the Oval Office, assisted I’m afraid, by general Kelly.

AARON MATÉ: We’ll leave it there. Gerald Horne, historian and professor of History and African American Studies at the University of Houston, thanks very much.