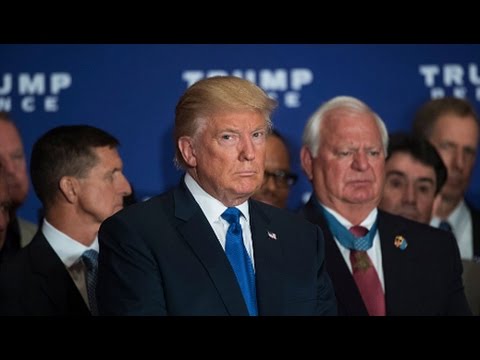 DONALD TRUMP: Now, not to mention her in the same breath but Hillary Clinton and her campaign of 2008 started the birther controversy. I finished it. I finished it. You know what I mean. President Barack Obama was born in the United States. Period. Now we all want to get back to making America strong and great again. Thank you. Thank you very much. Thank you.

BROWN: This contradicts a few years of his repeated accusations of doubt over whether Barack Obama was actually born in the United States. So the question is why now. Well joining us today from Athens, Georgia is Dr. Gerald Horne. Gerald holds the John Jay and Rebecca Moore’s Chair of History and African American study at the University of Houston. Dr. Horne thank you so much for speaking with us.

BROWN: So why is it that you think that Donald Trump has now walked back his literally now years’ worth of attacks over the birthplace of President Obama. Before he made his statement about the president being born in the United States period, he said that Hillary Clinton’s presidential campaign of 2008 was the first to make the birther claims. This has been fact checked by Politico and the Washington Post as being false but yet some on the left and the right disagree. What are the origins of birtherism Dr. Horne?

HORNE: Well that’s a very good question. I’ve been led to understand that there were elements in Hillary Clinton’s campaign that did float that false rumor in 2008 during the presidential campaign. Having said that, I think the reason that Donald Trump floated it when he did was to catapult him into the top ranks of GOP possible for the nomination in 2016 and obviously that worked since it was red meat for the yahoo base to fight the bonafide [feedies] of President Obama and to suggest that he was not only unqualified to be president but was there illegally since it would violate the constitution if he was in fact born in Kenya as the so called birtherers claimed. Now with the change of his campaign team in August 2016 and the attempt to appear more quote “presidential” unquote, I take it that Donald J. Trump has decided to walk back that claim.

BROWN: So why is it that you think that Trump is doing this now? Obviously he’s trying to bolster his support amongst African Americans and voters of color which whether or not he’s being successful in that is yet to be seen. But he rinsed this argument of birtherism for years on mainstream media. He actually even took credit for saying he was the one who coerced or forced rather President Barack Obama’s hand in releasing his long form birth certificate. This was Trump’s thing. Now today, or Friday, he’s not made it his thing at all.

HORNE: Now first of all you may recall that just a few days ago the emails of former Secretary of State Colin Powell were hacked. In those hacked emails, Colin Powell charged that the birther claim was rank racism, a charge with which I agree. However, there is another point that needs to be ventilated. And that is that President Obama was born in Hawaii in August 1961. Hawaii is 2,500 miles from the mainland of North America. An archipelago of islands that came at the US jurisdiction in the 1890s when the United States overthrew illegally, the justly constituted kingdom of Hawaii, incorporated it as a colony and then a state by 1959. I think all of us should wonder why this territory 2,500 miles is part of the United States of America. In any case there is no doubt and no question that it is. Although I do think that discussing these illegitimate birther claims should allow us to ponder why it is that the kingdom of Hawaii was overthrown.

BROWN: So there’s been a public policy poll from late August. It had Donald Trump with 0% favorability among black voters and since then he has visited 2 black churches in very scripted appearances. Do you see a tie in between this outreach and his announcement about Obama being born in America?

HORNE: I’m not so sure about that but I do agree with the mainstream consensus that Donald Trump’s outreach to voters has a faux or fake quality to it. That is to say he’s really trying to reassure middle class and possibly working class Euro American voters who are uncomfortable with the fact that as Hillary Rodham Clinton charged just a few weeks ago, that Donald J. Trump was connected to the so called alt right. The David Dukes and Klu Klux Klan types and by going to black churches and making outreach supposedly to black Americans, he was reassuring those voters nad helping to drag them into camp. More so than making a legitimate outreach to black American voters.

BROWN: Talk to us about this idea of otherism. I’ve been reading some articles, some op-eds and I’ve been following specifically a writer named Adam Serwer on Buzzfeed and he made an interesting point with some tweets. He said that the reason that birtherism was able to take hold and it wasn’t specifically about Obama. Obama just happened to be the centerpiece of it. But he said the reason birtherism was able to take hold with so many Americans especially on the right was because there was this notion of nonwhite not being American. That somehow black or other or brown is not as American as whiteness.

HORNE: Well I think he’s on to something. I think part of the problem we face in the United States is that many of our friends on the left have not done the hard work and the homework of fully interrogating the troubled history of this nation now known as the United States of America. As I’ve tried to suggest in my book The Counter Revolution of 1776: The Establishment of the United States, far from being a great leap forward for humanity was actually the establishment of the first apartheid state. And like apartheid South Africa, rights were dispensed on the case of whiteness and certainly that was the case in the United States of America. And of course you had the further point that rights were also dispensed on the basis of wealth. Often times the ladder is focused upon by our friends on the left, that is to say the class question and class inequality, that is to say bourgeois democracy. But totally missing the point of what we now call racial democracy.

BROWN: So Dr. Horne what I find really interesting is how the assertions made about Barack Obama during the 2007-2008 campaign for presidency made by whoever, whether it was made by Hillary Clinton’s people or whether or not it was something that was taken up by her supporters not necessarily condoned by her campaign but others took it and ran with it and then Trump elevated this otherism to birhterism. It seemed to be at the time something used to undermine the legitimacy of Barack Obama and his eventual presidency. But now to walk back these statements is also seen as political advantageous. How have we seen this now recent flip flop with how this birthism issue has been used.

HORNE: Well now in part I think it’s part of the so called mainstreaming of Donald J. Trump. The effort to broaden his base by moving away from the Republican primary constituency which is heavily studded with outright types, with xenophobes, homophobes, the so called basked of deplorables as Hillary Clinton so pungently put it. And moving beyond that to try and broaden a space. Now whether or not that will succeed is another question all together. Although as you know polls suggest that the race is tightening even though it appears that Hillary Rodham Clinton holds an advantage in the all-important electoral college. By the way there have already been stories in the right wing press that when the electoral college actually meets in mid-December 2016, supposedly to ratify the work of the voters in November 2016, that the law provides them an out. That they don’t have to necessarily go along with the voters’ choice in November 2016. That they have the authority to make another choice. That’s something that should worry us all.

BROWN: We’ve been joined with Dr. Gerald Horne. Dr. Horne holds the John Jay and Rebecca Moore’s Chair of History and African American Studies at the University of Houston. He’s been speaking with us today from Athens, Georgia. Dr. Horne thank you so much for your expertise. We appreciate it.

HORNE: Thank you for inviting me.