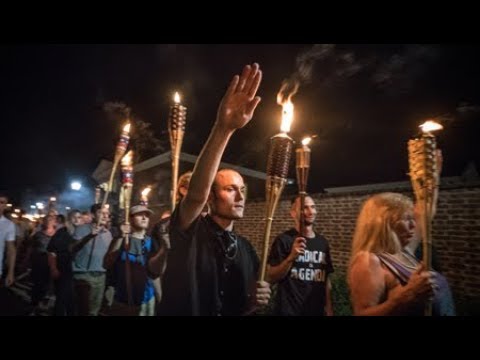 JAISAL NOOR: Welcome to the Real News Network. I’m Jaisal Noor in Baltimore. On Wednesday, Baltimore became the latest city to take down its Confederate monuments after activists said they would take them down if the city did not act. This comes a day after Donald Trump on Tuesday again said both sides were to blame for the clashes in Virginia over the weekend, adding that protestors on the political left violently attacked White Nationalists, rallying against the decision to remove a confederate statue. Here’s a bit of what he said.

JAISAL NOOR: Fallout from that press conference continues to grow. The New York Times is reporting President Trump’s council of corporate leaders is on the verge of disbanding after Trump’s latest comments. Now joining us to discuss this and more is Dr Gerald Horne. Dr Horne holds the John J. and Rebecca Moores Chair of History and African American Studies at the University of Houston. He’s the author of many books, most recently The Counter‑Revolution of 1776.

Thank you so much for joining us. Give us your reaction to what you just heard from Donald Trump and the news that’s coming out of cities like Baltimore, and as well as the fact that corporate leaders have finally had enough it seems like with Donald Trump.

GERALD HORNE: Let us hope that we’re on the verge of a turning point in terms of driving Donald J. Trump out of office. I think it’s important to take a long-term, long time historical point of view in order to analyze how we got to this juncture. That is to say that since its founding in 1776, the United States has been operating on two tracks. One, plundering people of color, particularly enslaved African and Native Americans, and taking their land, and secondly, welcoming European settlers of various tribes. Fortunately, the US Constitution pursuant to the first amendment tried to install freedom of religion and broke with the European pattern of religious sectarianism, principally Protestant versus Catholic.

Intermittently, this include those who were Jewish, but what we saw in the past few days, particularly in the march in Charlottesville on Friday involving what could fairly be called vanilla ISIS terrorists, was a determination by the ultra right to signal that they were willing to break with the First Amendment, they were willing to break with historic compromise of the United States in welcoming people of various religious persuasion, and seeking to expel Jewish Americans from the hall of halls of whiteness.

This is a very ominous turning point, and given that Jewish Americans were able to push back against antisemitism rather successfully in recent decades, it does not surprise me at all that the New York Times and the mainstream media, and now corporate chief executive officers, are now railing against Mr. Trump. Let us hope that this is just the beginning of the end.

JAISAL NOOR: I want to play another part of Trump’s press conference, where he questioned if statues of Thomas Jefferson and George Washington will also need to come down by the logic of those who oppose these confederate monuments. Here’s what he said.

GERALD HORNE: It reminds me of the sleight of hand that Republican Conservatives used in the 1960s when they were objecting to MediCare, the government extension of medical assistance to those 65 and older. Republican Conservatives argued at the time that this was a slippery slope, that would inevitably lead to a socialist USA. Mr. Trump is engaging in a similar of logic. That is to say, that if statues are removed from places of honor, this means somehow that we’re rewriting history and it also suggests an interpretation of US history that is not widely shared.

As far as I know I’m the only historian to this point who has raised questions about the bona fides of Jefferson and Washington as being apostles of liberty and equality. Mr Trump fundamentally is trying to throw dust in the eyes of the US people in order to enact and execute a more diabolical scheme, which is to rationalize white supremacy and keep white supremacy in its preferred place in the U.S. body politic.

JAISAL NOOR: To be clear, the white supremacy Trump wants to preserve and these Neo-Nazis white nationalists want to preserve aren’t just on statues. They exist in law, they exist in the criminal justice system today.

GERALD HORNE: Absolutely. I think we need to realize and understand that these statues were put in place not necessarily to ennoble and honor those who had given their lives in order to overthrow the United States government to perpetuate slavery forevermore, they were put in that place in order to administer a slap in the face to black people and any other people who would challenge white supremacy. White supremacy, which as your comment suggests, is deeply embedded in the law and customs of the United States of America. Therefor, when these vanilla ISIS terrorists marched on Friday, they were marching not only to preserve a statue to Robert E. Lee, they were also marching to preserve white supremacy.

JAISAL NOOR: Trump also blamed both sides for the violence in Charlottesville that resulted in the death of Heather Heyer and left dozens injured. Let’s play that clip.

DONALD TRUMP: There was a group on this side, you can call them the left, you’ve just called them the left, that came violently attacking the other group. So you can say what you want but that’s the way it is.

REPORTER: You said there was hatred, there was violence–

GERALD HORNE: You are correct. Keep in mind that David Duke is not necessarily the kind of fringe figure that some tend to imagine. Recall that in 1991 in a race for governor of Louisiana, he received 55% of the Euro-American vote and would have won but for an amazing and astonishing turnout by the black voters in particular. Keep in mind as well that Mr. Trump is seeking to evade responsibility, that is to say, to help white supremacists evade responsibility for murder or assassination in broad daylight, while being monitored by tape.

That is to say that the so-called alt-left, a term that he and Fox News have invented in recent days, that the alt-left did not kill this young women, a member of the white supremacist right killed this young woman. Seeking to disperse culpability and responsibility is a way, once again, to let white supremacists off the hook and make sure that they keep their preferred place, or the place they would prefer, on the front lines of U.S. life.

JAISAL NOOR: Professor Horne, the term alt-left has also been used for some time by liberals to condemn those on the left that are calling for universal healthcare or are trying to challenge tenets of the Democratic party, the corporate ownership of the Democratic party as well. That term has been around for a little longer than the few days in which Trump has gotten it front page headlines. Final comments here, do you think that we’re witnessing the … I guess, America coming to term on its original sin, this nation born on genocide and slavery?

GERALD HORNE: Well, hopefully it’s coming to terms with the enslavement of people of African descent in particular. It may take a while longer for the people of this country to come to terms with the dispossession of the indigenous population, because that requires a reckoning with regard to land. Secondly, it does not necessarily surprise me that this term, quote, alt-left, unquote, comes from our so-called liberal friends because if you think about it for a nanosecond, much of the rhetorical armor that Mr Trump uses is imported from the left.

I’m thinking of the term political correctness, which was often times invoked by some of our liberal friends to beat back anti-racist barrages. I think of the term, quote, identity politics, which somehow applies to Black Lives Matter, but does not apply to the construction of whiteness. I would hope that in reaction and response to what has happened in recent days, that many of our friends on the left, particularly our liberal friends, recognize that they should be careful not to pave the way for the rise of white supremacists like Donald J. Trump and his comrades in arms, like David Duke.

JAISAL NOOR: You can watch all of our extensive interviews with Professor Horne at TheRealNews.com. We’ll link to them on the story. Thank you so much for watching.