Greek Dockworkers Against the Troika

Dockworker and Union Leader, Giorgos Gogos, who is also a member of the Central Committee of SYRIZA says the workers are very ready for the struggle against privatization and austerity in the Memorandum.

Dockworker and Union Leader, Giorgos Gogos, who is also a member of the Central Committee of SYRIZA says the workers are very ready for the struggle against privatization and austerity in the Memorandum. 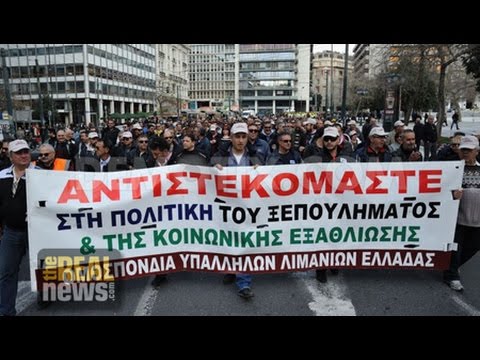 SHARMINI PERIES, EXEC. PRODUCER, TRNN: We’re in the port city of Piraeus. It is the largest port in the Mediterranean Sea, located just outside of Athens. It services 24,000 ships each year, including cruise liners, containers, and ship repairs. It is the major port of entry for the two largest Greek industries, shipping and tourism, employing about 1,500 workers. The Greek Hellenic fleet is the world’s most valuable merchant shipping system, valued at $106 billion, largely owned by the Greek oligarchy.

The Chinese state-owned shipping company, Cosco, owns the rights to two container terminals at this port. The memorandum that Syriza is currently negotiating with European creditors means that this port will be entirely privatized in the coming years. This will happen in spite of the fact that Cosco has been reporting ongoing losses, and has not bounced back from the 2008 recession.

In the July 5 referendum, over 75 percent of the residents living in this port city voted oxhi, no, supporting the Syriza call, in spite of the fact that both the local church and the mayor, who are supported by the shipping magnates in the city, advise them to vote yes. This port has been the site of struggle against privatization and austerity, not only in these recent times, but for the last decade.

With me to discuss these developments is Giorgos Gogos. He’s a Greek dock worker and union leader from the city. He’s a member of Syriza’s central committee, and he’s active in the regional and union levels of the party. He’s engaged in local organizing efforts in Piraeus, he supported the Syriza oxhi vote, and urged his union members to do so as well.

GIORGOS GOGOS: Welcome. I am general secretary the last five years of the dockworkers’ union of Piraeus Port Authority, and I work in the port the last ten years, since 2005.

PERIES: So tell me a little bit about the challenges you’re facing in this port.

GOGOS: It’s ten years now that they are trying to privatize the port. The first strike, it was when Cosco established themselves in the bigger part of the container terminal. This took place in June 2010. So we have already experienced five years of establishment of a private company, the bigger part of the container terminal of Piraeus Port Authority. Now we have a challenge in front of us. The entire privatization of Piraeus Port Authority. Out of 75 percent of the total shares that the state owns, they’re going to privatize 51 percent.

So this, it was a decision of the previous government. Initially they started by privatizing 67 percent. And the new government changed this condition to 51 percent. We are against this privatization for several reasons, and we are not the only ones that resist this decision.

PERIES: Tell me a little bit about the union. How large is it, and what are some of the challenges you’re facing in organizing against privatization in this port?

GOGOS: Our union represents the traditional dockworkers. We’re about 300 working in the public port. There are three more unions in the public port, and they’re organizing other specialties. Like people working in the administration. The other union is for technicians and operators of the machines. And the third one is for foremen and supervisors.

We’re not organizing people in the Cosco terminal. Recently, before a year, they made their first strike so as to demand their rights. And so far they didn’t succeed to conclude in the first basic collective bargain agreement, unfortunately, because they are quite biased by the management of Cosco company.

PERIES: Okay. And so what are the education levels of the workers? One thing that I found very intriguing of working people in Greece is that they’re highly educated in terms of what’s going on economically, what’s going on in terms of the debt crisis, what Alexis Tsipras is actually negotiating, and the impact it has on them and their work. And their site of work, in this case, this port. So give me a sense of the level of worker education and knowledge about what’s going on in the economy.

GOGOS: Yes. The last five years that we’ve had memorandums and Troika presence in the country raised very much the interest of people for politics. And inevitably because these memorandums affected so much our lives we are well informed about what it’s happening and why it’s happening, this.

People here, especially in this area, they voted with vast majority of 70 percent for no, and this no was against the austerity and continuation of the memorandums. It was not clear that all of this amount of people wanted to exit from Eurozone or from Europe in general, but all of them it’s clear–it’s clear that we didn’t want to continue with the austerity measures we faced that we faced over the last four years.

So I have to tell you that this area has a big percentage of unemployment. So people are really eager to find a job.

PERIES: Well, what percent of unemployment?

GOGOS: National level is about 25, 27. Here I think it raises more than 35. Especially the kind of, the terminal of Cosco, there is the ship repair zone, which was a very productive one and was giving employment to thousands of people. Especially living in the neighboring, [inaud.] in the neighboring municipalities. The lest eight or nine years the employment in this sector of economy, it’s about 90 percent. So you can imagine that there are dwellings that don’t have a working person in this area. So the real numbers are really high.

So it was something that Cosco took advantage. And because there is a huge pool of unemployed people seeking for job, they took advantage of this and they are paying very low wages. They have these humiliating labor conditions. We’re not given the right for people to organize themselves. And it’s–we can say in a few words that it manipulates the labor conditions.

PERIES: And did you see the new deal, or the new memorandum of agreement that Alexis Tsipras is about to sign on to, affecting your ability to negotiate and advertise even more?

Unfortunately this didn’t come true. And Schauble and [extra] neoliberals within the Eurozone. They defeated our negotiators, our government. And the final result was after a huge dilemma with–they had to choose between a Grexit without any conditions and the memorandum like they said that they are going to sign and to implement.

PERIES: And one other thing that is in the way of port workers organizing against privatization is the rise of the Golden Dawn, here. And I was wondering, the–and that is also sliced by the fact that the rise of the neo-Nazis or Nazis in this area is also on the rise, preventing some of the port worker organizing that’s going on. Tell me about some of that complexity.

GOGOS: Yes. It’s a bit strange. But in this, let’s say labor municipalities, the rise of Golden Dawn is quite high. It’s more than the average percentage in a national way, the percentage. Unfortunately these ideas and these practices, they find a field and they cultivate among the poorer societies.

In the port we don’t have indications that Golden Dawn has been intervening. But especially in the ship repair zone that they have this huge employment, they have created a, let’s say a trade union, which is not a trade union but a tool by employers that are covering this sector so as to minimize the wages and to further cut off labor rights.

This is a challenge that we have to face, and we work in this field so as to prevent expansion of Golden Dawn and Nazis in our working places.

PERIES: So given the majority of the people voted against the referendum here, what are their thoughts now? Or what are your thoughts now that the memorandum has been approved by the parliament, and it’s gone against the will and the democratic will of the people have done in this area, and perhaps unions in this as well. What are your thoughts, what do you think the next steps are?

GOGOS: We have mixed feelings. Passing from hunger, disappointment. We are not feeling well. It’s a new agreement, as I told you, a product of huge pressure. We know that it’s not going to be sustainable, it’s not going to be viable, it’s going to destroy certain sectors of Greek economy. And we know that we are going to reject it sooner or later. We are in a state of shock these days, because we saw our prime minister negotiating about 17 hours in a table with all these neoliberals trying to promote their plans.

It will take some time. I don’t think it will be a long time. But we’re going to organize ourselves and start fighting and struggle against these pressures. It’s very strange because a left party’s in power and they plan to impose these measures. It’s something very contradictory. But the target remains the same, these measures should not happen, should not take place, should not be implemented.

So we still want to continue our struggles. The point is organizing better so as to have better results. I think that very soon we’re going to have elections, and people will be asked again to say his opinion. So we’re continuing, so we remain vigilant to continue our fight.

GOGOS: First of all we have to say that we’re not talking about privatization like the others that happened in the European Union. Meaning concession to several providers, certain cargo terminals, et cetera. Here the case is the privatization of entire Piraeus Port Authority. It’s not only the cargo terminals, it’s not only the cruise terminal, it’s not only the passenger terminal that connects the ferry lines between the Greek islands and the mainland. It’s about privatizing public authorities. And this is unique in the European Union, with one exception. The changes, the reforms in port policy in Britain during the Thatcher era. And they are still trying to recover after 25 years of these reforms. So it’s something unique for the European continent.

And I think that even the people in the government, they’re not happy at all to implement this privatization. So taking into consideration that we have not the only ones that the resist to this privatization goes form other stakeholders around Piraeus. And being precise, it’s the local municipalities of [former] [inaud.] surrounding the port, it’s the commerce of–the Chamber of Commerce, the Chamber of middle-scale business. The bar association and other trade unions in the area of Piraeus.

So whole local society is against this decision. We’re not alone in this fight. And we are hoping we are going to win and keep the port under public control.

PERIES: Giorgos, thank you so much for coming on the Real News Network and speaking with us today.

GOGOS: Thank you very much.