Supreme Court Ruling May Spell The End of Affirmative Action 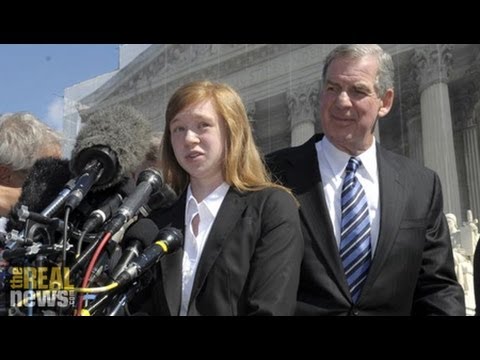 On Monday, the Supreme Court decided it will allow affirmative action to live another day, sending the closely watched case, Fisher v. University of Texas, back to the Fifth Court of Appeals and ordering it to take another look at the case under a standard that many fear will jeopardize the future of affirmative action.

Now joining us to talk more about this case is Glen Ford. He’s the cofounder and executive director of the Black Agenda Report. He also colaunched, produced, and hosted America’s Black Forum, the first nationally syndicated black news interview program on commercial television.

Thank you for joining us, Glen.

GLEN FORD, EXECUTIVE EDITOR, BLACKAGENDAREPORT.COM: Thanks for the invitation, Jaisal.

NOOR: Now, Glen, you’re alluding to this Supreme Court decision that took place ten years ago. Can you tell us a little bit more about that decision and what impact it’s had over the last ten years?

FORD: Well, in the Grutter decision, they narrowed the constitutional basis for affirmative action or diversity in such a way that, well, it basically laid all the existing programs up to some very, very tight scrutiny, a scrutiny that has not yet ended. And that’s quite clear from the decision of the Supreme Court today.

Affirmative action, as we had originally envisioned it, as vocalized by President Lyndon Johnson in 1965 in his address to Howard University’s graduating class, was specifically designed for black people as a measure to make up for slavery. That is, it was, in Martin Luther King’s words, both compensatory and–it was compensatory and preferential treatment.

Compensatory and preferential treatment has nothing to do with what the Supreme Court is saying is tolerable, acceptable under the Constitution today. The Supreme Court now says that, yes, the public institutions may have a stake in having a diverse student body–or workforce, for that matter–but not on the basis of owing a class of people who have historically been discriminated against, including by the government, any compensatory and preferential treatment, that this benefit that comes from diversity accrues to the society and the institution and is not intended for the group or the individuals who are allowed in under those programs. It’s very different.

NOOR: So I guess the underlying assumption is that the economic and other gaps between African-Americans and whites that existed in 1965 don’t exist today. What’s your response?

FORD: Certainly the rationale for uplifting specifically blacks because of documentable past disadvantages that were inflicted upon them partly by the government, that rationale is no longer considered by a majority on the Supreme Court to be a constitutional rationale. In Texas, there is a top 10 percent plan that allows entrance to the state universities for anyone who shows up at the top 10 percent of their class. That in fact–that program dwarfs at the University of Texas–and the University of Texas was the subject of the Supreme Court decision–the number of people impacted by that plan dwarfs the so-called affirmative action plan that was ruled on today. No more than–just a little over 200 people out of a university of 52,000 come under the affirmative-action plan, whereas thousands have been admitted, thousands of minorities, black and brown students have been admitted under the top 10 percent plan. The top 10 percent plan actually is a much more practical way for moving lots of minorities into higher education simply because white folks insist that they’re going to have segregated public schools, that there is going to be dual public school system. And as long as that is the case, then we can guarantee that at least there will be some respectable number of black kids going to state colleges if there are segregated high schools, if the top 10 percent of those segregated high schools will gain automatic entrance into those colleges. So it’s a much more effective plan then the watered-down and besieged and beleaguered affirmative-action plan at the same University of Texas.

NOOR: And I want to get to your response. This case, Fisher v. University of Texas, was filed by Abigail Fisher, a white woman from Texas who said that she was a victim of racial discrimination because she was denied admission and less qualified minority students were admitted instead.

FORD: [inaud.] point out that Ms. Fisher did not show up in the top 10 percent of her class, which I presume was at a predominantly white high school, and therefore was not qualified to enter the University of Texas under that plan. So now–that was in 2008. So Ms. Fisher now wants to compete only with those 200 or so–just a drop in the bucket of students–who for various reasons that have nothing to do with quotas, because quotas have been outlawed by the Supreme Court, for various reasons their presence in the university system, these very small numbers, the university believes will create a better environment for the entire university. In other words, the University is not saying that it has an obligation to any one of those 200 students that it allows in, but that it has an obligation to the university public, to all of the student body and the university as an institution, to at least have some people of color represented through this kind of plan.

NOOR: So it’s believed that this decision will spur a wave of challenges across the country to similar programs.

FORD: If the new standard is that affirmative action or diversity programs are unconstitutional unless there are no other alternatives, then all these institutions are going to have to prove that they could not find any other way to get a number of minority students into the student body except through that program. And that’s almost like having to prove a negative, isn’t it?

NOOR: And Glen, if affirmative action is ultimately killed, as many fear it will be, what should people be calling for instead in its wake?

FORD: The top 10 percent plan or top 15 percent plan has shown that given there’s going to be in the United States a segregated public school system, that the only way to guarantee that significant numbers of minority students get into higher education is to have a guaranteed slice of the students from their schools be admitted into the system. So in this sense–and I know it sounds strange–Texas is ahead of most of the country with their top 10 percent plan. We’d see better numbers throughout the country if the rest of the states adopted one. We will see tiny numbers even if affirmative action as seen in the program that was before the Supreme Court today, if we’re talking about those kinds of programs, they only involve small percentages of people at these institutions anyway. So the wholesale solution is more like the 10 percent plan.

NOOR: Thanks so much for joining us, Glen.