Ford: Kennedy Was A Cold War Warrior to the Core, pt2

On this episode of Reality Asserts Itself with Paul Jay, Glen Ford says there is no evidence that Kennedy differed from other U.S. presidents in striving for global hegemony

On this episode of Reality Asserts Itself with Paul Jay, Glen Ford says there is no evidence that Kennedy differed from other U.S. presidents in striving for global hegemony 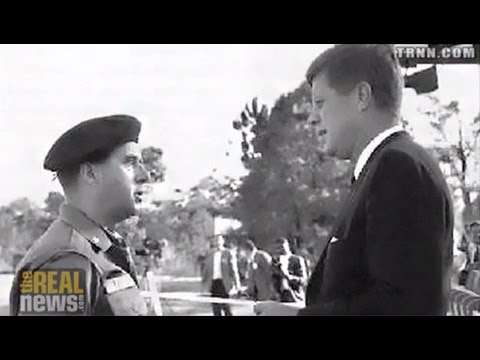 PAUL JAY, SENIOR EDITOR, TRNN: Welcome back to The Real News Network. I’m Paul Jay. And this is Reality Asserts Itself.

We’re continuing our discussion with Glen Ford, evaluating the presidency of JFK on the 50th anniversary of his assassination.

Now joining us again is Glen Ford. He’s the executive editor of Black Agenda Report. He was the founder and host of America’s Black Forum, the first nationally syndicated black news interview show on commercial television. Ford’s also the author of The Big Lie: An Analysis of U.S. Media Coverage of the Granada Invasion. And I should add he’s a regular contributor to The Real News.

JAY: So part one of this interview is more about domestic issues. And now we’re going to pick up a little more on the international front, which obviously preoccupied most of the Kennedy presidency.

In terms of the history of JFK and his relationship to the Soviet Union, to national liberation movements, his anticommunism, his–of course, some people say, his preparation, if necessary, for a nuclear war against the Soviet Union, and so on and so on, the theory goes that after the Bay of Pigs–and then you have the Cuban Missile Crisis, when the Soviets put missiles into Cuba and there’s this big confrontation–Kennedy orders a naval blockade of Cuba, and Krushchev backs down and the blockade is lifted, but we came as close as most people think we ever did to a nuclear war. Anyway, the theory goes that after this, Kennedy changed his approach to foreign policy, and this affected his Vietnam policy, where he decided at that point he was going to try to get out of Vietnam. In other words, Kennedy really did become a kind of dove, a liberal in foreign policy because of coming so close to the brink.

What’s your evaluation of Kennedy and his foreign policy?

FORD: I don’t think we see any evidence of a changed Kennedy, possibly a chastened Kennedy after the U.S.-backed forces were beaten at the Bay of Pigs. That would tend to change somebody’s mind about the chances for successfully using U.S. military power or proxy powers abroad. That doesn’t mean that the inclination and the desire to aggressively pursue U.S. power has diminished at all. This is the Kennedy who only weeks before his own assassination arranged the assassination of the South Vietnamese dictator that Eisenhower had backed and that the Kennedys had backed, that is, Diem and his brother, and began the series, the unending series until 1975, of dictators, of military dictators in charge of South Vietnam. So I fail to see any evidence that Kennedy ceased being the Cold War liberal who would come into office talking about a missile gap, that is, saying that the Soviets were ahead of the United States in antiballistic missiles when clearly–and we know that the opposite was true. By saying that, by raising the missile gap issue, he was calling for an escalation of the Cold War, of the dangerous armed end of the Cold War. So this is not a person who just has an inner peacenik self that’s just waiting to bust out, and I see no evidence that it ever did bust out.

JAY: Well, there seems to be two competing theories. And I don’t know if you’ve kind of studied this, but I’ll ask you.

Chomsky’s thesis on this is that Kennedy’s plan was to pull out of Vietnam if there was a victory, but not otherwise, and that in his first years of presidency they thought there’d be an early win in Vietnam, which is why there was some suggestion of possible withdrawal. But Chomsky argues it was always based on victory, then withdrawal.

Others are arguing that there’s evidence–and they quote, for example, some private conversations that Kennedy had with people, and these people later said so, but essentially that this is unwinnable, and after I get reelected–I can’t say anything about this before, ’cause I can’t look like a president that’s going to lose a war, but once I get reelected we can get out, because eventually they’re going to throw us out.

This is two very competing theories here. Do you have a sense of this?

FORD: You know, Kennedy certainly was building up the infrastructure of U.S. aggressive war. The Green Berets are largely, in their modern sense, a creation of the Kennedys. The U.S. Special Forces had been around since right after World War II, but they weren’t backed by a huge publicity campaign as Kennedy introduced, and quite clearly. We knew this at the time, and certainly we know it in hindsight, that this massive expansion of the Green Berets and this propaganda about their purpose was in preparation for U.S. intervention, covert and overt, in Latin America and, of course, in Southeast Asia.

So here we have Kennedy being one of the architects of this new period of U.S. hyperaggressiveness in the Third World. That doesn’t sound like the kind of guy who’s going to withdraw from Southeast Asia the first time he gets a face-saving big victory. It doesn’t make sense to me.

JAY: In some ways it occurs to me that–’cause we’ve been working on this for the last week or two–it’s somewhat of a distracting debate, I think, whether he planned to get out or didn’t get out, because I think in some ways that was a tactical decision. What I mean by this: this has become a big debate because people tie it to assassination theory, that if he–the reason he was assassinated is ’cause he planned to get out of Vietnam and there were sections of the military-industrial complex that didn’t want that war ended, so they kill Kennedy. Whether that’s true or not I don’t know.

But I think what I’m getting at here is if he did plan to get out, it’s only ’cause he thought it would weaken the projection of American power as a whole, for the same reason Barack Obama opposes the Iraq War: not because he’s against projecting global power and being the dominant power of the world; it’s ’cause he thought the Iraq War was just a mistake and would actually weaken that dominance. And I think you could say exactly the same thing for Kennedy, that he was very committed–and I think very important what you just said: the issue wasn’t just about the Soviet Union. Maybe after the confrontation of the Cuban missile crisis he’s very aware of making sure the world doesn’t blow up, but he does not lessen his commitment to opposing national liberation movements all over the world, which in many ways I think were more an issue than the Soviet Union was. And, of course, they always use the attack on the Soviet Union as a way to say that national liberation movements were just the Soviets taking over the world. But we know from CIA analysts that were actually briefing presidents on all this that nobody really believed any of that. So I guess the real issue is that, that Kennedy creates this liberal vision of America bringing democracy to the world by supporting dictators everywhere.

FORD: Yeah. You know. And if we follow the logic here, let’s assume that Vietnam was looking like a quagmire that should be escaped from after one face-saving victory. Well, if he still wants to confront the Soviets wherever he can and wherever he can do it efficiently and effectively, well, then, we’re talking about Vietnam-like aggressions elsewhere–in Latin America, in Africa. If the cold warrior, the Cold War liberal wants a war and he’s the head of a superpower, he can find one. Kennedy clearly wanted some wars. He wanted a confrontation.

JAY: Gore Vidal, who I got to know pretty well and knew Jack Kennedy quite well–and he was in and out of the White House. For people that don’t know, Gore Vidal shared a stepfather with Jack Kennedy’s wife, Jacqueline Kennedy, and so Gore was in those family circles. And Gore actually loved Jack Kennedy as a person, actually, he was very fond of him, and hated Bobby Kennedy for reasons he never explained to me. But he actually said what you just said: Jack Kennedy fully believed to be a historic president you have to have won a big war, that people only remember wartime presidents, and that was part of what drove Jack.

FORD: Yes. Profiles encourage the persona not just of the president but of the American nation, the crusading national character going up against the villain, that whole creation of mythology in your own time. And it’s effective. And that’s why we’re having some elements of this conversation.

JAY: And I think, just to go back to what I said just a few seconds ago–and so did you–the real threat, I think, and where the real attention of the United States was was to opposing national liberation movements. They didn’t want country after country becoming independent from the U.S. sphere. And most of those national liberation movements were leaning toward socialism. If they achieved their victories, they would have become probably some form of socialism or another and somehow escaped this American and the global capitalist sphere. It’s not that they were going to become, you know, puppets, necessarily, of the Soviet Union. Far from it. Most of these national liberation movements were having lots of problems with the Soviet Union and the kind of support they’re getting from them.

FORD: Sure. National liberation movements stemmed from historical oppressions of people. They are not generated by Soviet folks in faraway Moscow. The United States allied itself–and specifically President Kennedy, through his creation of the Green Berets and of the Peace Corps, which was, of course, deeply tied with the CIA–he was laying the infrastructure for the horror, the continental-wide horror that the U.S. would impose on South America, on Latin America during the Johnson and Nixon years.

JAY: One of the charges against the Kennedys is they stood by while death squads were being organized in Guatemala and other places in Latin America. I shouldn’t say stood by. Some say the CIA obviously actively supported.

FORD: Presidents are responsible for what happens on their watch. In the case of the Kennedys, there’s every reason to believe that this initiative, this robust foreign policy was an un-initiative of those two.

JAY: So when you look at today’s presidency and today’s U.S. foreign policy, do you see any echo of the Kennedy administration?

FORD: Well, people are trying to synthesize that Camelot feeling and sound, and many thought that they had they’d found it with President Obama. I think his Camelot is wearing a little bit thin, though.

JAY: Alright. Thanks for joining us, Glen.