Trump Raises Fears About Nukes, But US Anti-War Movement Is Lacking

"It's not that Americans are less intelligent than other people, it's that the U.S. imperial system is accepted by most Americans without them really thinking about the nature of that system," says Black Agenda Report's Glen Ford

"It's not that Americans are less intelligent than other people, it's that the U.S. imperial system is accepted by most Americans without them really thinking about the nature of that system," says Black Agenda Report's Glen Ford 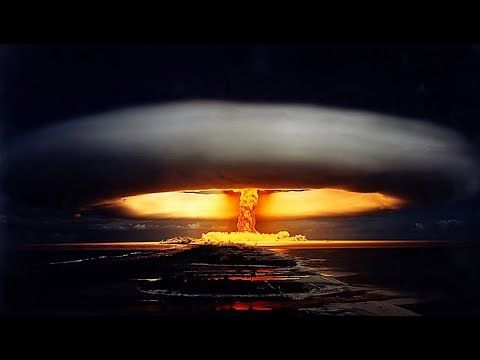 EDDIE CONWAY: Welcome to The Real News. I’m Eddie Conway, coming to you from Baltimore. Ever since Donald Trump was elected as president, there has been concerns in the United States of America, as well as in the world, about his erratic behavior leading to the use of nuclear weapons. Recently, he traveled to China and Asia. He was exchanged insults with the President of North Korea, and that concern has only been heightened about the use of nuclear weapons. So, in Congress, there’s an effort now to put some kinda control on him. Joining me today to explain what’s going on is Glen Ford, the executive editor of Black Agenda Report. Glen, thanks for joining me.

GLEN FORD: Thanks for having me.

EDDIE CONWAY: Can you explain what’s going on in Congress, how they’re trying to control Trump’s behavior?

GLEN FORD: Oh, I don’t think they can explain themselves. It might sound strange to some folk’s ears, but you could say that Donald Trump has made a significant contribution to the cause of world peace simply by scaring the hell out of a lot of people. Or you might alternatively conclude that the Democrats have scared themselves into finally taking a stand on the perils of nuclear war, and that’s 72 years after the United States incinerated the two Japanese cities of Nagasaki and Hiroshima. During all that time, or most of that time, the Soviet Union, the main competitor with the United States, had a policy of no first strike. They only renounced that policy after the collapse of the Soviet Union and the US moved its nuclear weapons right up to the border with Russia.

In recent years, Russia has gone back somewhat towards that no strike position, but not the United States. But now we have the advent of President Trump, or we also have the advent of the Democratic campaign to make President Trump seem like the most dangerous human being who has ever lived, and some of the Republicans seem to agree. So, at long last, finally, the US first strike policy is finally on the table for discussion. Nobody was talking about it for all of my life and for yours, Eddie. Now there’s a Senator, Senator Ed Markey of Massachusetts, and the Congressman from California, Ted Lieu, they’ve introduced bills that would require that the Congress declare war before the US could use a nuclear weapon. Another congressman from the State of Washington has a bill that simply says that the US should not be the first to use a nuclear weapon.

Donald Trump himself said once that the United States should not do a first strike and that he as president would not do a first strike because, in his words, “Once the nuclear alternative happens, it’s all over.” But then a couple of months later, Donald Trump said that everything is on the table and that would include a nuclear first strike. I think one of the biggest questions that’s raised now that a nuclear first strike is finally on the table is, if you’re gonna talk about Donald Trump, what about Hillary Clinton? Many folks think that she is a very dangerous, warmongering person who people should also be concerned about in terms of having a nuclear weapons.

So, I did a Google search to see what Hillary Clinton had to say about the US and a first strike. I could not find any mention anywhere of Hillary Clinton taking a position for or against US first strike. I can only conclude that that’s because no one in the corporate media has ever asked her about a US first strike. And that’s because US nuclear policy has basically been off limits, as far as the corporate media is concerned, for all of these years that the United States has held the future of the Earth in its hands and the hands of whoever is president. So, it took the arrival of Donald Trump and the Democratic campaign to declare him the most dangerous man in the world for the United States to finally talk about what it does with its nuclear weapons.

GLEN FORD: Yeah. Well, the difference would be that it would hopefully gum up the works and provide us with a few extra minutes for somebody to decide, no. But you’re right, of course. After the passage of any kind of bill that would allow Congress to be the party that declares war or not, I’m sure that the next piece of legislation that would come out of the Congress would be a bill that would throw the ball right back to the executive branch so that they wouldn’t have to deal with it.

EDDIE CONWAY: Okay. I noticed that Obama had flirted with the idea of reducing nuclear weapons and inferring that his position was maybe not to use a first strike policy. But then I see he spent nearly $1 trillion to build the nuclear armory.

GLEN FORD: Yeah. Barack Obama said a lot of things. He’s very calculating in that way. He said all these words that would lead people to think that he’s considering some kind of more peaceful type of policy. But then what he sends to the Congress is, as you mentioned, a request for $1 trillion, over the next 20 years I believe, to upgrade the US nuclear arsenal. That upgrade coming from the Obama White House is what the Trump administration keeps getting blamed for in the corporate media. It seems people don’t remember that that was what was in fact requested by the Obama administration. And yeah, if you are requesting trillions of dollars to upgrade your nuclear weapons to make them more efficient and reliable, you can’t expect the other side not to believe that you’re looking at a first strike capability.

EDDIE CONWAY: Is there anything people in the United States of America can do to help this effort in Congress?

GLEN FORD: Well, yeah. There’s lots of things that people could do. We don’t have much of an anti-war movement, however, to carry out the strenuous tasks that are involved in contacting all of your representatives and every opinion-molder that you can think of in order to get the chorus of folks, of human beings saying, “We wanna live not die by nuclear fire,” get that chorus to singing. But the United States does not have much of an anti-war movement, never did. Under Democratic administrations, whatever we, even the vestiges of that movement tend to atrophy and die, waiting on a Republican to come into office.

Well, now they’ve got this Republican that they say is more warlike than the Democrats, and yet we still don’t have much of an anti-war apparatus. You know, I think that the country’s problem is not lack of information. It’s not that Americans are less intelligent than other people. It is that the US imperial system is accepted by most Americans without them really thinking about the nature of that system, and that the US First Strike Position was not questioned because Americans were told that the United States is a good and kind and indispensable country that would never do a first strike on another nation unless it was absolutely justified despite the fact that the United States is the only country that has in fact used nuclear weapons against other human beings.

EDDIE CONWAY: Okay. Well, we’ll keep our eye on this as it goes through Congress and we’ll revisit this. Thank you for joining me, Glen.

EDDIE CONWAY: And thank you for joining The Real News.