Police Shootings of Native Americans are Underreported and Rising

The Native American population suffers from higher rates of police shootings, but this is generally underreported because the incidents often occur in remote areas, explains Glen Ford of the Black Agenda Report

The Native American population suffers from higher rates of police shootings, but this is generally underreported because the incidents often occur in remote areas, explains Glen Ford of the Black Agenda Report 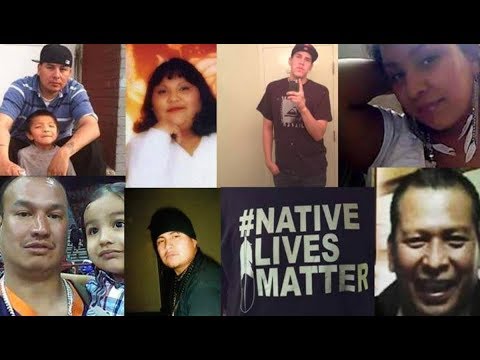 SHARMINI PERIES: It’s the Real News Network. I’m Sharmini Peries coming to you from Baltimore. Over the past three years, the issue of police shootings of African-Americans has received much attention. Less known, but equally severe, are police shootings of Native Americans. CNN and Newsweek point out that Native Americans are victims of police shootings to a far larger extent than is generally known, that is, according to latest data reported by the Center for Disease Control. Between 1999 and the year 2015, police killed 2.9 Native Americans per million inhabitants per year. For African-Americans, the figure is lower at 2.6 per million per year, and for whites, it is 0.9. The Native American figure at 2.9 is the highest such rate of any ethnic group in the US, and the actually number is probably higher, according to the Indigenous Law and Policy Center at Michigan State University.

Joining me now to discuss this is Glen Ford. Glen is the executive editor of the Black Agenda Report. He’s also the author of the book titled, The Big Lie. Glen, good to have you with us.

GLEN FORD: Thanks for having me.

SHARMINI PERIES: Glen, so what is your assessment of the problem of police shootings of Native Americans?

GLEN FORD: The data on Native Americans in general is very problematical and that’s why you’re going to continue to have this kind of confusion and it will be difficult to compare the newest figures with last year’s or figures from 10 years ago. Actually, all that we can be confident of seeing is some kind of general tendency. The reason these figures with Native Americans are so problematical is because, well, essentially the biggest problem is that Native Americans populations are split. They’re split between the isolation of reservations, and then that portion of the native population which is in big cities, but in relatively small groups with a small social presence in those big cities. They are far less likely to be tracked by ethnicity, and this affects the whole range of statistics on Native Americans.

Native American activists will tell you that much of their lives are hidden or nearly invisible, and purposely so. Unlike black people, and black people number about 40,000,000 and we’re strategically located in big cities and able to disrupt those big cities if we get mad enough. Native Americans are clustered in these outbacks of the United States, these reservations, or scattered in cities where they are very difficult to be tracked. They are mixed in with other core communities, so we’ll continue to have this problem of apples and oranges in terms of the data.

GLEN FORD: Of course, it’s not accurate. If there had been a doubling of the rate of police killings of Native Americans, that would have to be caused by two or three or four Pine Ridge-style confrontations. Massive confrontations between Native Americans and police. That would not be hidden. So, no, that’s a function of the fog of these statistics of on column here not really equating into the column over there. It basically is an admission that official America doesn’t know what the hell is happening with Native America.

SHARMINI PERIES: Now, Glen. According to the Agency’s reporting this data about Native Americans being killed by police, say that the actual number might be 20% higher than are reflected in the statistics because there are many that go unreported, because if you live in the reserve, people are unlike to report some of these incidences because they fear the very police that are outside of their reserves. So, Native American numbers could be higher. What do you make of this?

GLEN FORD: You know, there’s one statistic, which, if true, jives with what you were just saying, and that statistic says that Native Americans are more likely than any other group to be killed by people outside of their group. That is, most white people who are murdered are murdered by other white people and most black folks who are killed are killed by other black people. But, disproportionately, Native Americans are killed by folks who are not Native Americans, and that would in most cases be white people. I think what that’s measuring is this total imbalance in terms of power and accountability on the reservations in those outbacks of America, where an apartheid of the most brutal kind still exists.

SHARMINI PERIES: What all this points to, Glen, is that we actually need a fair and accurate assessment of the problem in order to address it, although the general stroke seems to be correct in the sense that police do abuse Native Americans as they do African-Americans and other minorities. What needs to happen now?

GLEN FORD: Native Americans, first of all, need what everybody else needs, and that is power in their own communities. The power to do lots of things, including keep track of all the vital statistics of the things that happen to their communities. As long as those vital statistics are in the hands of other people, they will be inherently untrustworthy.

SHARMINI PERIES: Alright, Glen. I thank you so much. It’s certainly an issue we should keep an eye on and try to do a bit more research and investigation ourselves. Thank you so much for joining us.

5 Years Later: No Indictments in Choking Death of Eric Garner