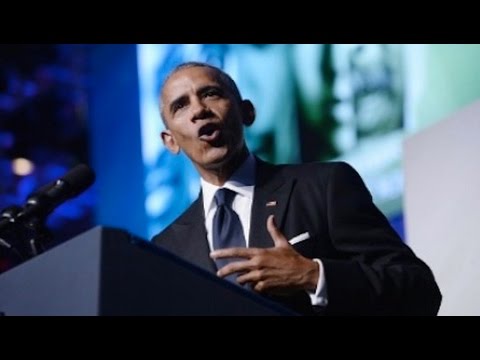 On Saturday, Barack Obama gave his final address as president to the Congressional Black Caucus’s annual gala. While underscoring the importance of voting in this election especially, he had pointed words towards the black community.

BARACK OBAMA, U.S. PRESIDENT: And after we have achieved historic turnout in 2008 and 2012, especially in the African-American community, I will consider it a personal insult, an insult to my legacy, if this community lets down its guard and fails to activate itself in this election. You want to give me a good sendoff? Go vote.

BROWN: In 2008 and in 2012, the Associated Press found that black voters turned out to the polls at higher rates than white voters, in no small part because [of] Barack Obama’s viability as a serious candidate and because he was on the ballot as a popular incumbent. But in spite of voting for Obama at 90-plus percent rates over his GOP opponents, some in black America wonder if this allegiance to the president and to Democrats at large yielded any tangible gains for the community.

Joining us from Plainfield, New Jersey, is Glen Ford. Glen is a cofounder and executive editor of Black Agenda Report. He’s also the author of The Big Lie: Analysis of U.S. Media Coverage of the Granada Invasion.

Glen, thank you so much for speaking with us.

GLEN FORD: Thanks for giving me the opportunity.

BROWN: Glen, I’m very interested to get your take and your thoughts about the president’s very enthusiastic mandate, as it were, for the black community to specifically go out and vote because if they don’t, it is a personal insult to his legacy. Your thoughts on that.

FORD: Well, essentially what Barack Obama was trying to do was make Hillary Clinton the black candidate. And the fact that he would do so in such, I think, a shameless way at the Congressional Black Caucus dinner is really an admission of what for Democrats is a very disturbing reality. And that is that just because virtually no black folks are going to vote for Donald Trump does not mean that black people will turn out with great enthusiasm for Hillary Clinton. In other words, Barack Obama’s symbolic blackness is not transferable. And it is especially not transferable to young black people, young black people who are influenced by a new movement that’s been on the scene for the last several years. And for folks in that movement and in that political cohort, Hillary Clinton is attached to some very big negatives in black America.

Now, people who understand people’s voting behavior in general know that folks tend to turn out in large numbers because they are defending themselves or think that they are defending themselves. And so, for example, in Florida, two-thirds of white voters are down with Trump, and they’re down with Trump because they believe that Trump is defending them and people, white people like them, who they believe are under assault in terms of their economic and political position in society. And that’s a must-win state, Florida.

But black millennials, younger black folks in general, do not think that way about the Democratic Party in general or Hillary Clinton in particular in terms of being the defenders of black folks. The polls show that Hillary Clinton is not running as well–as you said–among blacks as Obama did, even though Trump is, again, getting virtually no black support. And that makes Hillary Clinton’s election calculations, especially in key states like Florida and like Ohio, it makes those calculations very iffy. The Democrats ran a series of focus groups over the summer, and they found out how soft Hillary Clinton’s support is among black millennials. And it also confirmed that younger blacks are not so influenced as their elders are by the black church or by black old-line organizations like the NAACP and the Urban League and groups like that, which are virtual appendages of the Democratic Party. And what that means is that the usual Democratic get-out-the-black-vote techniques, the techniques that they roll out every four years, these techniques do not work that well among these younger and very skeptical black voters.

So Barack Obama can go ahead and get as insulted as he wants to be about Hillary Clinton not being able to march in his black footsteps. But if the truth be told, among black millennials even Barack Obama is not so enthusiastically supported as some people think.

BROWN: Well, Glen, let’s look at that for a moment, because some would argue–even the president made this point on Saturday when addressing the Congressional Black Caucus gala–he said that he wants to improve upon the progress that was made and that there’s only one candidate for president on the ballot who is willing to make improvements on things that he has done. And one thing he referenced was the rejuvenation of the Civil Rights Division of the Department of Justice. When we checked the unemployment rates for black Americans, in 2009 it was hovering near 15 percent, and now it’s right around 8 percent. Can the president argue that he and his policies have had more of a net positive than a net negative on black America? Or is that something that is still up for debate and requiring way more scrutiny?

FORD: Well, in terms of the criminal justice system, what progress there has been, what progress the administration has been engaged in has been because of the push from what people call the Black Lives Matter movement, this first manifestation of a mass black grassroots movement that we’ve had in two generations. President Obama has been the focus of pressure from those quarters and has moved in some very, very small fashion because of the pressures that came from that people’s movement.

You know, I think it’s kind of ironic that the president makes this final parting and don’t-insult-me statement before a dinner of the Congressional Black Caucus, because Caucus members not so long ago were talking about being fed a “satan sandwich”–a “satan sandwich”–by President Obama after Obama tried to come to a grand compromise, a grand bargain with the Republicans, right before the 2012 election.

And so, when we look at his record in terms of the social safety net, we’re talking about a president who came into office declaring that under his watch, the social safety net, the so-called entitlement programs, including Medicare and Medicaid and Social Security, would all be on the table for cutting. And most of them were cut, and he attempted to cut Social Security.

So if we’re going to do an overall assessment of President Obama’s record, well, I don’t think he comes out well on this, except that people will make excuses for him, saying that, well, he would have liked to do many good things, but he was obstructed by the Republicans. I tend to think that Republican obstruction of Barack Obama–that is, their failure to agree to his grand bargains–actually put us in a better position than if he had gotten everything that he had wanted, which would be further cuts and austerity.

BROWN: We have been joined with Glen Ford. Glen is the cofounder and executive editor of Black Agenda Report, also the author of The Big Lie: Analysis of the U.S. Media Coverage of the Grenada Invasion. He’s been speaking to us today from Plainfield, New Jersey.

Glen, we certainly appreciate your time, as always.