Katrina Victims Were Forced into Exile 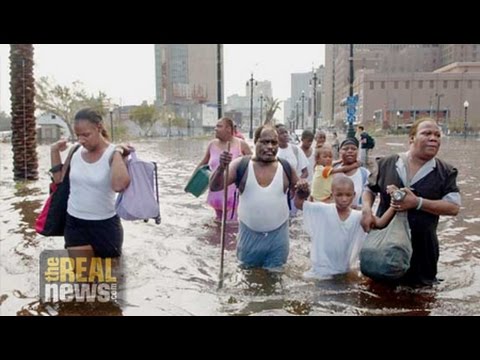 JESSICA DESVARIEUX, PRODUCER, TRNN: Welcome to the Real News Network. I’m Jessica Desvarieux in Baltimore. And welcome to this edition of the Glen Ford Report. Now joining us is Glen Ford. He’s the executive editor of the Black Agenda Report, and he’s a regular contributor to the Real News. Thanks for joining us, Glen.

DESVARIEUX: So Glen, this week marks the 10th anniversary of Hurricane Katrina. And of course we’ve been seeing many media reports discussing what has been done since the storm and how people are faring. One article in particular was this New Yorker article written by Malcolm Gladwell. I know you had a bone to pick with Gladwell, so I’ll let you sort of lay out what was in the piece.

FORD: Well, it was a very, very upsetting article. And you know, the New Yorker is a magazine that’s on the liberal end of the spectrum. But with Gladwell’s article they have produced a piece that actually speaks in the language of genocide. I’m sure that Gladwell doesn’t think that he’s speaking genocide, but he is, and here’s why.

But first, Gladwell goes through the exercise showing statistics that showed that people who were in prison when Hurricane Katrina hit, and couldn’t go back to their old neighborhoods because their old neighborhoods weren’t there anymore, were later less likely to go back to prison. That their recidivism rates were lower. He uses those statistics to show that people that were, had very little upward mobility because they were prison inmates, found at least by going to Houston or someplace else that they could stay out of jail, and that was a good thing. It would be even better, he believes, if lots of people from New Orleans could go to those cities that his sociologist friends have designated as being more upwardly mobile. Most upwardly mobile, like Seattle and Salt Lake City and Minneapolis, Minnesota. Those are all, of course, mostly white cities.

What’s wrong with that reasoning is that it only blames the victims, the people who were poor before Katrina hit, and were made homeless and displaced because they were poor. It blames them for the problem. It doesn’t say a damn thing about helping poor people. It says only that poor people should leave the environs of other black and poor people and somehow find themselves in the midst of whiter and richer people, and that that would solve the problem. Not an effort to fight poverty at all.

He wants to keep moving, ultimately, black people around so that there won’t be any concentrations of black folks in the country, because that is the problem. Well, if concentrations of black and poor people are the problem, then we can just solve that whole thing by getting rid of all the black and poor people in the country. We can go back to the time of President Monroe, and up to the time of President Lincoln, when a predominant strain of white thinking was that black folks should be gathered together and shipped either back to Africa or Haiti, or someplace, but not here. Because, well, they just don’t belong here. And that seems to be what Gladwell, who is biracial and a Canadian, is saying, too. That’s what his logic says, whether he thinks that his logic is genocidal or not.

DESVARIEUX: Glen, but what about this counterargument, that if you have these poor communities sort of be dispersed and you create more of mixed-income communities by having them go to cities like Seattle or Salt Lake City, some of those examples. What do you make of that? I don’t know if Gladwell presented that directly, but is there something to be said for that?

FORD: Well you know, black people have been going around the country looking for good neighborhoods, trying to settle down there if they were allowed to. That is the history of black folks. And part of that history is also that white people constantly run away from those neighborhoods. And that’s why those neighborhoods then become concentrations of black people and poor people. The poor part usually comes later. Because when there are no more white people there then capital is withdrawn, the employers leave, the public sector ceases to serve that community, and the police are brought in to prey on that community, which diminishes further upward mobility and causes downward mobility.

Black people had nothing to do with that. White people’s flight had a great deal to do with that. And white supremacy in general, in this country. White supremacy in a capitalist nation means that the mere presence of black people will reduce property values because white people will be less likely to buy or want to live near the property. Black folks have nothing to do with that. And the only way that you deal with this problem of white supremacy and capitalism is through government intervention, and that costs money, and that was the element, of course, government intervention, that was nowhere to be seen in Gladwell’s article. Because all he thinks you need to do was just keep moving the black folks around till somehow the mix is right and the white people go about their merry way.

DESVARIEUX: All right. Glen Ford, always appreciate your candor. Thank you so much for joining us.