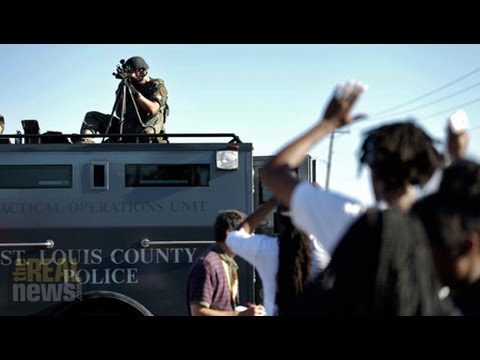 JESSICA DESVARIEUX, TRNN PRODUCER: Welcome to The Real News Network. I’m Jessica Desvarieux in Baltimore. And welcome to this edition of The Ford Report.

Now joining us is Glen Ford. He joins us from Plainfield, New Jersey. He is the cofounder and executive editor of The Black Agenda Report, and he’s a regular contributor to The Real News.

Thanks for being with us, Glen.

DESVARIEUX: So, Glen, August 25 was the funeral of Mike Brown, the unarmed teenager in Ferguson, Missouri, that was shot and killed by police officer Darren Wilson. Right now, Glen, how should people be looking at this story? It’s been more than two weeks since that fatal shooting. What questions should people still be asking?

FORD: I guess the main question to ask is: 16 days later, how is the national conversation, but most especially the black political conversation, different than it was 16 days ago? And the answer to that is: yes, there is a difference. We are now talking about the militarization of the police. It’s not a new subject. It’s not certainly not a new phenomenon. It’s been going on for 50 years and was the subject of great debate to when it was first introduced in dramatic fashion on the streets of black America in the ’60s. But it hasn’t been part of the general conversation until now.

And, of course, if we’re going to focus on the militarization of the police, then the next question is: well, why? Why are the police militarized? What is the function of the police? Why do they militarize police in black neighborhoods and not white? Therefore we must talk about the relationship between black people and power. And that, of course, is a very fruitful conversation.

So something is different today than 16 days ago. And, in fact, it’s, I think, been kind of a desert in terms of black politics for–well, almost for a decade. But there really have not been these kinds of mesmerizing events outside of the campaign to elect Barack Obama that creates the kind of productive conversation. In 2005 we had Katrina, and everyone was speaking about Katrina and the meaning of that event. Virtually every church and every black civic association had some kind of program surrounding Katrina. But what we didn’t have is a response of any kind from the black leader mis-leadership class, and especially from the Congressional Black Caucus, which was determined to follow the dictates of the Democratic Party, Nancy Pelosi, the speaker of the house, who was anticipating that the Democrats might make big gains in the 2006 election, and she didn’t want to endanger that by having this black conversation going on. Black conversations tend to go badly for Democrats because it reminds white folks that the Democratic Party is the home of black folks and the party suffers. So the conversation on the ramifications, the meaning of Katrina, was shut down. The Democrats not only held no hearings; they barred their black congresspersons from attending Republican hearings, which–almost all of them went along with the embargo except Cynthia McKinney.

And then we have the presidential campaign, and that seemed to be all black folks (or at least the talking class) cared about, and a whole four-year term of Obama in which nothing happens except that people start understanding that Obama isn’t going to do anything for them.

And then we have in his second term the killing of Trayvon Martin and another upswelling of black anger and discussion about our relationship to power. But nothing came out of that in terms of the existing black leadership either. The only significant fallout, if you call it significant, was that the Obama administration started making noises pretending that it really did care about criminal justice reform.

Now we have another ghastly occurrence and an outpouring of black rage and something different. I think the something different is that black young people, not just in Ferguson but everywhere, are clearly not waiting on and not even giving much respect to the Al Sharptons and the Jesse Jacksons and the black elected officials. They are acting autonomously and speaking their minds and putting their agenda, which has everything to do with what the hell is the job of the police and what is our relationship to power, up front.

DESVARIEUX: Glen, I want to go back to that question you asked in the beginning in terms of why are the police so militarized in black communities. Can you answer that question?

FORD: Sure. They’ve been militarized in black communities since the 1960s because the powers that be consider black folks to be a potentially insurrectionist force. The militarization is a counter-insurgency strategy. They are ready for war. And that’s what–that was what gave birth to the SWAT teams and that’s what gave birth to the federal programs that began with the Johnson administration, the last days, and were put into full gear under Nixon to flood weapons not just into the urban areas, but even into rural areas to beef up the U.S. power military structure to deal with potentials of a black rebellion. And still they are organized in that way. And it’s the only rationale for behaving as they do, whether they have military gear on or not in terms of the police on the streets of black America.

DESVARIEUX: So if people are aware that their communities are militarized–as you said, young people are really coming forward and presenting their agenda–can you speak to some specifics? What kind of things are they bringing up?

FORD: Well, in terms of their demands and in terms of their refusal to respond to the immediate calls for calm that emanate from the preaching class and most of the elected black leadership, whose job it is to calm down anger in the black community. But that’s what they’re there for. That’s the role that they play. Well, these young folks in Ferguson didn’t bite that worm. They stayed up, they refused to recognize curfews, they refused to recognize the legitimacy of force that was treating them as if they were a subversive presence. And they did that against the wishes of most of what we call the black mis-leadership class.