Only Community Control Will Stop Police from Killing with Impunity 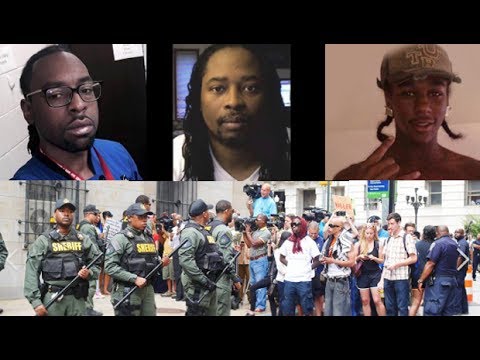 Jaisal Noor: Welcome to the Real News Network. I’m Jaisal Noor in Baltimore. Three more trials for police officers charged with killing black men have ended without guilty verdicts. While the media has reported that no one will likely be held criminally accountable for the deaths of Samuel DuBose, Sylville Smith and Philando Castile, little discussion has occurred around what would actually prevent these situations from arising, namely, community control of police.

Now joining me to have this important conversation is Glen Ford, executive editor of Black Agenda Report. Thanks so much for being back with us, Glen. Tell us your thoughts.

Glen Ford: I think these three cases in particular make it painfully clear that police impunity is something that is deeply built into the system, and it’s built into the system so deeply that even those rare prosecutors that try cannot penetrate it. In Milwaukee, that jury acquitted a cop who shot a young black man who had thrown his gun away and was already wounded and already helpless.

The policeman’s lawyer, however, was able to successfully argue that it was reasonable for the cop to fear that the man might have a second gun. He didn’t see a second gun but he feared that he might have a second gun and that police are trained to keep on shooting until, essentially, the subject is dead. If that is the case, then it does no good for a person to surrender or surrender their weapon, because the cop is still justified in killing him, according to that type of practice that we saw in Milwaukee.

In Minnesota, the cop was acquitted after he killed a person who was fully cooperating with the officer and who told the officer that he had a licensed weapon. The cop said that he feared for his own life, initially because he smelled marijuana and he believed that Mr. Castile had been smoking marijuana around the child and therefore he might do anything, and it was reasonable for the cop to fear for his life.

The jury thought that that was reasonable. In Tulsa, Oklahoma, a female cop shot Terence Crutcher to death for what looked like no reason at all. She said that she had looked Crutcher in the eye and she believed that the man was sizing her up, for some reason. Nobody else saw Crutcher do anything that was remotely threatening, but the cop was nevertheless acquitted of manslaughter charges. All of these cases were captured on video. There were black jurors represented on all of the juries, and the cops included a young black man and a young Hispanic cop, and white female officers, and all three of these district attorneys had taken the rare step of indicting a cop, something that most district attorneys never do in their entire careers.

It is deeply embedded in the American criminal justice system that cops who claim to be in fear for their lives must be believed, especially if their victim is black, and the only [crosstalk 00:03:40] break this cycle is …

Jaisal Noor: Hey, Glen, if you don’t mind, I’m going to just jump in real quick. I think a point that I’m sure you’re going to raise but I think we should talk about now, too– it wasn’t that the DAs just decided to prosecute these cops, right? It was because there was uprisings in these cities, and so there was public outcry that prompted these prosecutions, as well.

Glen Ford: That’s right. In Milwaukee there was civil disturbance and, certainly, all over the country, and especially in Minnesota, there was a great deal of organizing that went on, and, of course, we now have these video cameras, which means that there is a large public awareness of what the cops are doing, but that does not seem to change the outcome. It convinces some district attorneys that they have to do the right thing, but it’s overcoming these deeply embedded impediments to successfully prosecuting a cop once he or she has committed the crime … Excuse me, once he or she has killed a civilian, remains extremely difficult.

I think that the promise of black community control of the police, although it certainly is no panacea, is that if black community folks have a real say, an effective, decisive say, in which people are hired to be cops, and how long they can remain cops, at least there is an opportunity for the community to apply its own standards of reasonableness and sanity to this police force. Obviously, the standard of reasonableness that prevails today is one that is dangerous to the health and well being of every black person who walks the streets.

It’s not that it happens instantaneously and it doesn’t require struggle, but in Toronto, for example, they tried to ban racial profiling, which is an ongoing struggle there, but the demand is key.

Glen Ford: Sure, set policy, decide what the standards are for hiring of police officers, have a decisive say in who the upper echelon cops will be. White folks in rural areas had that kind of community control, and have had it for a very long time with their elected sheriffs. Those sheriffs were responsive, at least, to the voters, but it seems, it’s treated as something crazy to think that the folks in the ghetto should have a choice about who’s going to be the commanders of the precincts of police that patrol the ghetto.

Jaisal Noor: I was having a similar conversation this morning. It was around education, specifically. What can we do to fix schools and obviously, in places like Baltimore, we need more resources. We need a wrap around service that has more investment, but you can’t have that conversation, how to fix one institution, without looking at the underlying economic conditions. You can’t fix what’s happening inside of a school without looking at the entire community in which the school represents, and I feel the same way with law enforcement.

You can’t just hold police accountable without looking at the underlying issues of poverty and government policy that helps perpetuate and create poverty and segregation. We have to start unraveling that, as well, and then you’re also going to have fewer interactions. You’re going to have fewer desperate people that are trying to feed their children and end up in these situations.

Glen Ford: The fight for black community control of the police actually engenders and goes hand in hand with the discussion of the entire relationship of the community to those folks who actually rule, and to the institutions of coercion that we call the police, and who they serve. When you have established that the community does have a decisive, and deserves the decisive say in what security is in the community, what policing should look like as well as who should be doing that policing, then all of the other questions of power relationships are also on the table, and out there for community discussion.

It would be an integrated kind of discussion about relationships of power, who answers to who, and who’s going to enforce the rules, who makes the rules.

Jaisal Noor: We know Colin Kaepernick recently caused a lot of controversy when he equated the modern police force with slave catchers, which is what their origin is. Similarly, it’s all about property. It’s all about ownership, in both cases, so ultimately, unless you fundamentally change who owns things and the concentration of wealth in this country, you’re still going to see these patterns repeating themselves.

Glen Ford: That’s right. Community control of the police does not really alter the patterns of power in society, but it does have promise, in terms of getting rid of cops who make a sport of killing black people, and putting a dent, or at least opening this system, that allows cops to behave that way, to some kind of effective review by the people.

Jaisal Noor: Just a quick final note, in the case of Philando Castile, the city is paying out almost three million dollars to settle that civil suit. Cities like New York have paid out something like almost a billion dollars to settle civil cases involving brutality. Chicago, it’s something like half a billion, Baltimore, it’s several million, over the last seven years, according to a Sun investigation.

There’s a statute in state law which prevents these large damages we’ve seen in other jurisdictions, but it’s going to be economically beneficial for cities, as well, because this enormous … Cops aren’t being criminally held accountable, but the money is still flowing from tax payers to pay for the actions of these bad cops.

Jaisal Noor: All right, Glen Ford, thank you so much for joining us.

Jaisal Noor: Thank you for joining us at the Real News Network.

COVID-19 Is The New Cash Cow For Policing

‘They Know Who I Am’: Auditor Arrested Again—While Playing a Video Game

December 12, 2019
Sign Up for Our Newsletter
Help Us Make Real News!