What Trump’s Campaign Reveals About Race and Voting

Glen Ford, executive editor and founder of BlackAgendaReport.com, says that Donald Trump's campaign can teach us about the role of race in American elections

Glen Ford, executive editor and founder of BlackAgendaReport.com, says that Donald Trump's campaign can teach us about the role of race in American elections 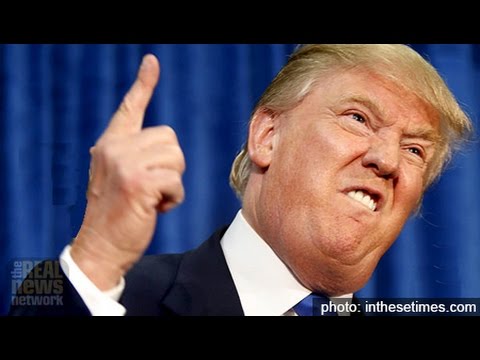 Glen Ford, executive editor and founder of Black Agenda Report, is back with us again for the Ford Report. Welcome back to the Real News, Glen.

BALL: You wanted to talk with us about Donald Trump and what I think is an interesting assertion on your part, that, quote, “We have long known that Black people, the core of Hillary’s primary season support, are the group least supportive of US military adventures overseas. They are not voting for Hillary the war monger, they are voting for the candidate they believe has the best chance of defeating the white man’s party, a vote almost entirely based on race.” Could you please explain?

FORD: Well, I think that the statement says it. The prime motivation for Black folks in recent decades when going to the polls is not to find a good match, in terms of the Democrat that they’re going to vote for, in terms of whether that Democrat really reflects the way they look at the world, but to cast the vote for the Democrat that they believe will beat the Republican. That is, who will defeat the white man’s party, and that’s the real motivation.

I think, however, that this election year is so very, very strange and full of, well, hidden knowledge, maybe, is because Donald Trump has caused us to see within the Republican ranks and reveal who these white Republicans really are, and he does this by making what the corporate media call outlandish statements on domestic policy and on foreign policy, and when his group of white Republicans sticks with him despite the supposedly outrageous nature of those policies, it shows us that, well, it’s not so outrageous after all, and that possibly not just the Republican Party but both of the major political parties are based on pillars that stand on very shaky ground. Specifically, that corporate governments, governance, and the maintenance of a huge US military empire around the world are not necessarily what most people want, Democrats or Republicans.

I think it became very clear early in Donald Trump’s campaign that his supporters just really don’t give a damn about corporate-friendly tax policies. It became clear that they do not like Wall Street, and they really, really hate so-called free trade because they believe it sends their jobs to China. This Trump juggernaut is demonstrating what some of us have been saying all along, that much, if not most, of white support for the Republican Party, the big attraction to the Republican party for white people is really race, that they don’t have much actually in common, politically, with the rich people that run the party like Mitt Romney and the Bushes.

What these folks want is a white man’s country. They want to take back America, in their words, take back America for white people. And now Donald Trump is speaking at some length on foreign policy, and he’s saying things that Republicans do not say. And if his followers stick by him, and I think they will, after these statements, we will see that there is no real consensus for the bipartisan foreign policy of the United States, a foreign policy that has a thousand US bases in the world, and the NATO military alliance, and constantly [threatens] against Russia and China, and of course an alliance with people like Saudi Arabia.

But Donald Trump, in a recent series of interviews with major papers, has called into question these staples of bipartisan rule, and by doing so he has positioned himself, at least rhetorically, to the left of both Hillary Clinton and Bernie Sanders. Hillary Clinton is, of course, a war [monger], but by his statements Bernie Sanders gives us little reason to believe that he’s any better.

And yet, Hillary Clinton, the core of her support is Black people, and she could not possibly get this nomination without Black people, and yet we know that Black people are the most pro-peace constituency in the country. And I think it’s also safe to assume that these progressive white people who are the core of Bernie Sanders’ support stand to the left, are more pro, on the pro-peace sector of American politics. So we see that this Washington consensus, the consensus that the United States should build a structure of empire all around the world, this Washington consensus isn’t even a real consensus in the United States, and that would call for a political realignment, wouldn’t it, in the United States? And isn’t it strange that a right-wing, billionaire racist like Donald Trump would have to reveal that to us by his actions.

BALL: But Glen, just very quickly, you know, we hear a lot of conversation that Black voters who will not support Bernie are unsophisticated for their allegiance to Hillary, and a similar assertion continues to be made about the majority of the voting, the white voters who support Trump, that they, too, are unsophisticated, and were they to really vote in their interest they would also go to Bernie Sanders. How do you respond to that, particularly given this point you’re making about the reason why Black voters are sticking with Hillary?

FORD: The reason they’re sticking with Hillary is, it’s not something that is the fault, primarily, of Black folks. The duopoly system in which one of the parties will be a white man’s party, leaves only one other party, if there’s going to be just a duopoly, for Black folks, and it becomes a kind of trap, and if the strategy of those Black folks caught in this duopoly trap is to lend their support to the candidate that they think has the best chance of beating the white man’s party then they are likely to wind up supporting the most right-wing candidate, or set of forces, within that Democratic part of the duopoly, within the trap.

The apologists for that kind of behavior say that Black people are exercising strategic voting. If that’s true it’s a very bad strategy, because with that strategy there are only two outcomes that can occur. You get the white man’s party winning the election or the election is won by the folks in the Democratic Party who are the worst enemies of Black folks within that party. So it’s a lose-lose proposition, and not a very good strategy for voting.

BALL: Well Glen Ford, thanks again for joining us here at the Real News for your Ford Report.

BALL: And thank you all for joining us wherever you are in the world. Again, I’m Jared Ball here in Baltimore saying, as Fred Hampton used to say, to you we say peace if you’re willing to fight for it. So peace everybody, and we’ll catch you in the whirlwind.