Preferred Jihadists and the Crisis in Syria

Glen Ford, executive editor and founder of Black Agenda Report, was back to discuss suppressed aspects of the crisis in Syria, particularly, the fight among elite ruling circles and the continued use of preferred jihadists as "foot-soldiers" for Western empire.

Glen Ford, executive editor and founder of Black Agenda Report, was back to discuss suppressed aspects of the crisis in Syria, particularly, the fight among elite ruling circles and the continued use of preferred jihadists as "foot-soldiers" for Western empire. 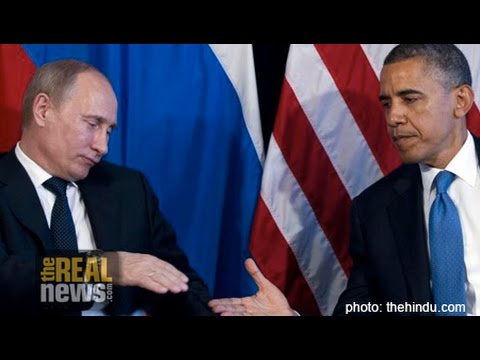 Executive editor and founder of Black Agenda Report, Glen Ford, joins us once again for the report that bears his name, the Ford Report. Syria is to be your focus in this report, Glen, and I understand that you see as major issues confronting that country and region, among others, the inability of the United States to wean itself off dependence on so-called terrorist organizations, and jousting between various circles of elites. Again, welcome back to the Real News, and if you would, please elaborate.

GLEN FORD: Well, it seems like that is what is happening. And it’s kind of alarming news. The Russians say that they will unilaterally use their air power to stop violations of the ceasefire that exists in Syria if the United States doesn’t hold up its end of the bargain. And we have to remember, it was only about a week ago that the Russians made their surprise announcement that they were scaling back their deployment of troops and planes and other weapons systems, because they said the Syrian government’s military position had stabilized, and they didn’t need all of that Russian power.

But President Putin also said, as he was scaling back, that the Russians would come back in full force if they were needed in Syria. The Russian scaleback was also thought of by many folks as evidence that Moscow and Washington had reached some kind of strategic understanding, that the U.S. had backed off of its demand that Assad must go. And many people thought, or hoped at least, that it meant the U.S. was scaling back, backing off its historical support for these jihadist terrorist groups.

So the Russians’ new warnings to the United States, especially coming so soon after the partial pullout, probably confuse a lot of people. The reason that the Russians are upset is that the Americans actually have not fully complied with the agreement that they reached back in late February. That agreement called for the Russians and the Americans to coordinate their attacks on the two, two major jihadist terrorist organizations. That is, ISIS, of course, but also al-Nusra. Al-Nusra is the al-Qaeda affiliate in Syria. But all the United States and all the United States corporate media want to talk about is ISIS, when in fact al-Nusra, the al-Qaeda outfit, is actually integrated into the battle formations of most of these so-called moderate rebel outfits that the United States is so anxious to protect in Syria. And that the ceasefire agreement was designed to protect.

So what’s happening here is that the al-Qaeda fighters are being allowed to blend in with the so-called moderate rebels, and escape the Russian bombing. And the U.S. is facilitating that kind of tactic. Under the ceasefire, the Americans are supposed to report to the Russians. And this is supposed to happen back and forth on a daily basis. Report to the Russians on the location of the various armed groups. And in fact, a United Nations Security Council resolution obligates the United States and all the other powers in the region, it obligates them to bomb al-Nusra as well as ISIS. That’s according to this UN resolution. But the United States has not been doing that. They’ve been bombing ISIS, but not al-Nusra.

Instead, it’s become clear that the U.S. is using the ceasefire to shield al-Nusra, and allow those al-Nusra, al-Qaeda fighters to bolster the so-called moderate rebel positions. And in fact, on the front lines, al-Nusra often is the rebels. And that’s been the case for years, now.

The U.S. corporate media helps to add to this confusion. For example, if you go to the New York Times and you look at their war maps in Syria, you will see government-occupied territory shaded in a certain color. You will see ISIS-occupied territory shaded in a certain color, usually red. And then you will see rebel-occupied territory, also with its own color. But in most of these New York Times maps, and I’m sure it’s the same thing in the Washington Post and these other papers, in most of these, al-Nusra has no color. Has no shade. It’s all lumped in with the so-called rebels. And that’s the way it looks on the battlefield, too, because the U.S. is not complying with the agreement.

But the real deal, the real deal, what’s really happening here, is that the United States is still not cutting its umbilical cord to these jihadist terrorists. ISIS, yes, but al-Nusra is still on the American dole.

BALL: Just very quickly, Glen, why do you think it’s necessary that they be on that dole?

FORD: Because these are the only foot soldiers that the U.S. imperial project has in that arena. They have been, they played that kind of role in that region of the world, ever since the late 1970s, when the U.S. found that it had no foot soldiers on the ground in Afghanistan. And so it’s organized, armed, financed, and created something that had never existed before in the history of the world. And that is a jihadist international network. And that network has been useful to the United States ever since. It was useful in the regime change in Libya, and they immediately moved it to Syria. But some of those jihadists, having their own ideology, had plans of their own. ISIS is, of course, the biggest example.

And so there has developed a split in the ruling circles, as we say, in the administration, in the U.S. government, in the U.S. military, about the utility of these jihadists, whether they’re more dangerous than they’re worth. I think that’s why the United States, President Obama didn’t follow through on his threat to bomb Syria back in 2013, because that would obviously aid the growing ISIS forces, and of course al-Nusra, which is where ISIS split off from.

BALL: Glen Ford, thanks again for joining us here at the Real News for your Ford Report. We appreciate this unpacking of the crisis in Syria.

BALL: And thank you all for joining us, as well. Again, for all involved, I’m Jared Ball here in Baltimore, saying, as Fred Hampton used to say, to you we say peace if you’re willing to fight for it. So peace, everybody, and we’ll catch you in the whirlwind.