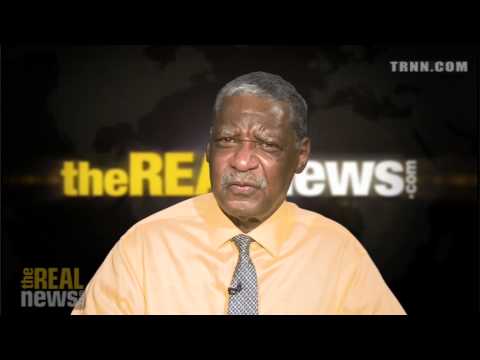 I think one of the things that I’m hearing is that you’re saying, like, this mass incarceration thing is a direct result of us trying to gain our self-determination, trying to empower the black community, trying to decide where we wanted to go in the ’60s and the ’70s. You’re saying the results of the system itself, the government itself, their reaction was to lock up black people for the next 50 years?

GLEN FORD, EXEC. EDITOR, BLACK AGENDA REPORT: That was the real response, and it’s absolutely provable by all of the numbers. And yet this narrative, the one that our children are told–in defiance of what they can see with their eyes–the narrative is that somehow the country–meaning white society and the white state–that somehow the country and the state were reconciled to the rebellions and mobilizations of the ’60s. They were not reconciled at all. Their response was a hammer, a hammer that has come down on black Americans in ways that are unique in the world. That’s why we’re one out of every eight prison inmates in the world.

CONWAY: Well, how does the war on drugs fit into that? I mean, I’m starting to wonder if the loss of the jobs and the explosion in the prison-industrial complex–both of those things are directly tied to the war on drugs?

FORD: Well, certainly Michelle Alexander, in her book The New Jim Crow, does a very, very good job of pointing out how the war on drugs was directly connected to the mass black incarceration state that she calls The New Jim Crow. Remember that Nixon administration personnel were arguing–with listening devices rolling–about how to focus the political problems of the country on the blacks, to pin it on the blacks. And they decided that this war on drugs (which would actually be a war against blacks), would do the trick. And then in the ’80s they did the same thing, manufacturing a cocaine, crack cocaine crisis before the crisis actually existed, and then, as we know, facilitating the inflow of cocaine into the black community.

So, yeah, the war on drugs is part and parcel, inseparable from the creation of the mass black incarceration state and the maintenance of it. And we have to add here that black elected officials, since we’re celebrating the vote and all the miraculous things this vote has supposedly done for us this weekend, that black elected officials collaborated in the imposition of this mass black incarceration state, not just mayors and city council people who collaborated, participated in sending their city’s quota of young black folks to prison, to state prison every year, but half of the Congressional Black Caucus in 1986, when the 100 to 1 ratio punishments for crack cocaine, as opposed to powdered cocaine, when that bill was passed, maybe six–half–of the Congressional Black Caucus voted for it. And the month before Michael Brown was shot down in Ferguson last year, the Congressional Black Congress caucus, 80 percent of them, four out of five of them, voted against a bill that would have halted the Pentagon’s transfer of military weapons and gear to local police departments. So they, 80 percent of them by vote or by abstention from voting, 80 percent of them are culpable for the militarization of the police.

CONWAY: Thank you for joining The Real News.