The Killing of Anthony Robinson on the 50th Anniversary of Selma 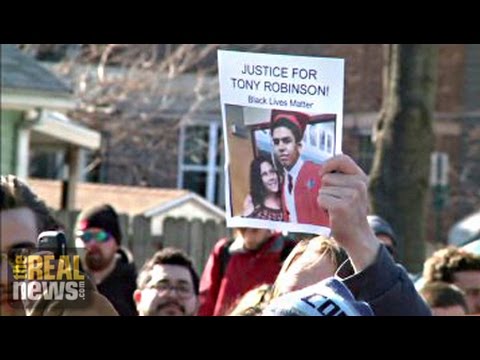 I’m thinking that the recent incident–up in Wisconsin, was it?

FORD: Well, it’s not really clear what happened, except that it should not have happened. There was some ill-defined altercation not well described that occurred with a 19-year-old black man named Anthony Robinson, who then went into a private home. And in hot pursuit–and I say that in the full military sense of the term–a white 45-year-old cop followed him, entered the house, and then the 19-year-old black man wound up dead.

And, of course, we hear the same slogans that we heard in Ferguson in Madison, Wisconsin. Remember, President Obama told the crowd in Selma that racism, in terms of police behavior, is not endemic to America, that Ferguson is not representative of America. But here this weekend, even as he was speaking in Madison, Wisconsin, which is considered to be a liberal stronghold of America, we see the same scenario.

CONWAY: Yeah. It’s interesting, because earlier I had been talking to someone and I had mentioned that a black man, woman, or a child is killed every 28 hours on the average by law enforcement personnel, security personnel, correctional personnel, etc. This seems to be a continuation of that report about lynching. Did it ever stop? I mean, if this has been happening–and the reason the Black Panther Party came into existence, in fact, was because of this consistent attacks throughout the nation on blacks and the murder of blacks by police. That was one of the mandates that the Black Panther Party had was to try to bring attention to that and patrol and protect the community so that those lives wouldn’t be [lost]. Now, this was 50 years ago. Now, apparently this stuff goes all the way back to lynching. Is this a continuation of that? I mean, have those Klansmen changed uniforms? I mean, what’s going on?

FORD: Well, actually, the Klansmen put on police uniforms. And we know when this happened as well. The Law Enforcement Assistance Administration came into being in 1968. A bill signed by President Johnson brought into existence. And its job was to funnel hundreds of millions of dollars–and it finally became, in later programs, billions of dollars–to local police departments. That was because primarily, I mean, if we’re talking about the South, the law-and-order aspect of Jim Crow was largely enforced by the good old boys, who were formally or informally deputized to keep black folks in line whenever they were deemed to be acting up.

But with the civil rights movement, black folks were less likely to be cowed by civilian whites, and the federal government saw a need to vastly increase the police forces not just in the bigger cities due to rebellions, but also in the small towns and rural counties of the South. And many of those same good old boys who used to lend their guns and fists and matches and torches to the sheriff whenever the sheriff asked for help in keeping the Negroes in their place, those people gained full-time employment in police departments.

CONWAY: Well, how do you explain the amount of black faces, brown faces, etc., with the badge and the guns that are also participating in this constant lynching of people of color?

FORD: Well, that gives the lie to the whole idea that, first of all, it’s just a bunch of a few bad apples in the police force and not something systemic that causes the problems between the black community and the police, and the idea that all you have to do is give sensitivity training to police and some of that problem will be solved–if police could just walk in black people’s shoes, they wouldn’t behave so savagely towards people. But we see that even black people, when they put on that blue uniform and strap on that gun and come into a militarized chain of command, act just like white officers do. So it’s not the mentality of the individual officer; it’s the mission that the system assigns the officers that lead to the predictable results all over the country, from Ferguson to Atlanta, and even, yeah, to Madison, Wisconsin.

CONWAY: What is that mission?

FORD: Oh. The mission is one of counterinsurgency. That’s why it begins, this mass black incarceration state begins around 1970. That’s when statistically you can see the definite evidence of it. That’s when the incarceration stats begin to go wildly off the charts. It’s the response of the state to the mobilizations of the ’60s, both those that were nonviolent and those that took the form of rebellions and those that took the form of the Black Panther Party asserting black folks’ right to self-determination by any means necessary. The response was, okay, you people will not stay in your place? We have a place for you, and that place is prison. And the infrastructure began to be assembled around 1970, and you see the population moving into the prisons about that time.

So we’re still living with the actual U.S. response to the ’60s. And it wasn’t a joining in, singing the song “We Shall Overcome”; it was in building the American Gulag. And now, today, one out of every eight prison inmates in the world is an African American. That is part of the legacy of the post-’60s.

CONWAY: Thank you for joining The Real News.