Guilt Abounds: Democrats and Republicans Struggle to Clean Up Their Image Over Flint’s Dirty Water

Executive editor and founder of BlackAgendaReport.com was back with his Ford Report discussing the political calamity that is Flint Michigan's water crisis.

Executive editor and founder of BlackAgendaReport.com was back with his Ford Report discussing the political calamity that is Flint Michigan's water crisis. 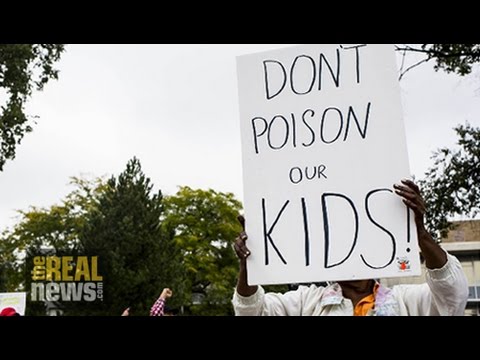 Glen Ford, executive editor and founder of Black Agenda Report, joins us once again for his Ford Report, where, Glen, I understand you want to tell us your take on the Flint, Michigan scandal that is evolving, emerging, and ever taking shape right now.

GLEN FORD: With your permission, you know, the Democrats are trying to milk the Flint River catastrophe for all it’s politically worth. They’ve scheduled a Democratic presidential debate for Flint on March 6. That’s two days before the Michigan primary. Michigan’s Republican governor, Rick Snyder, this week–back to this week, is refusing to attend or testify before a Democratic Congressional panel. They want him to answer for his failures in Flint, including switching Flint over, his emergency financial manager switching Flint over, to the polluted waters of the Flint River. That was Snyder’s deal. His emergency financial manager regime is a pillar of his administration.

But the Democrats can’t get away from the manager regime themselves, because a previous governor, Jennifer Granholm, also used those emergency financial managers. She used them to disenfranchise black folks in their relationship to the public schools. And the national Democratic administration is just as guilty as the Republicans are when it comes to taking takeovers of the public school systems. Emergency financial managers are not just a Republican domain. They’re also part of the Democratic initiative as well.

The Federal Environmental Protection Agency under President Obama failed utterly to protect the citizens of Flint, Michigan, and their water. And it’s true that the regional director of the EPA resigned, but it hasn’t gone further than that. And the federal investigation is underway. The Republicans are trying to get ahead of this very damaging issue. A special counsel to the Michigan attorney general said that it’s possible that manslaughter charges could be brought if anybody dies as a result of gross negligence in Flint, Michigan. The reason they have a special counsel looking into that is because the Michigan state attorney general is busy defending the Republican governor Rick Snyder against lawsuits that had been brought against him by residents of Flint, Michigan.

What’s different today is that there is an emerging grassroots movement on the ground, and that compels the Democrats to behave as if black lives really do matter after all. And that’s the difference between the Flint River catastrophe and Katrina.

BALL: Well, Flint, Michigan’s perhaps most famous resident, or one most famously known to be from Flint, Michigan, the white filmmaker Michael Moore, has been engaged in protests. Perhaps that will help bring attention to the Black Lives Matter activists in the face of a white, a famous white person being involved and calling attention to this. But speaking of famous white people also, and you know, Hillary Clinton has brought attention to this issue and is looking to make political hay of this, saying that she is the person that can bring proper attention and recompense to the people, particularly the black and poor people there in Flint, Michigan. But I take it that you’re not moved by those claims, either.

FORD: I’m not moved, but Bernie Sanders has one-upped Hillary Clinton by calling on Governor Snyder to resign. So let’s see if the stakes get higher and higher as we move towards that March 6 Democratic debate.

BALL: Just one quick general question. There was reports of emails being leaked that show that officials there likely knew of the potential for disease to, to become rampant as a result of this water crisis. What do you think that this says, in addition to what you’ve already said about the state of affairs politically in this country, and the ability of dominant political entities to offer proper redress?

FORD: Well, the emergency financial management system itself shows that there was a concerted effort on the part of the Republican administration to disenfranchise, to silence, to make totally powerless the black population. What I think the emails show is that these Republican officials actually took some degree of crude pleasure at being able to thwart the certainly righteous aspirations of Flint River folks to drink clean water.

BALL: Well, Glen Ford, as always, we appreciate you taking the time to join us for your Ford Report here at the Real News.

BALL: And thanks again to all of you for watching, and for all involved, again, I’m Jared Ball here in Baltimore saying, as Fred Hampton used to say, to you we say peace if you’re willing to fight for it. So peace, everybody, and we’ll catch you in the whirlwind.