Glen Ford: 50th years after the launch of the War on Poverty, Democrats and Republicans still refuse to address the systemic causes driving poverty in the US today

Glen Ford: 50th years after the launch of the War on Poverty, Democrats and Republicans still refuse to address the systemic causes driving poverty in the US today 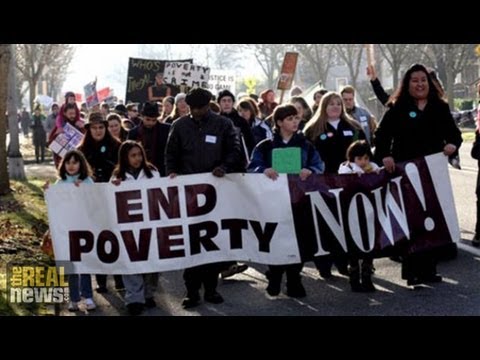 JAISAL NOOR, TRNN PRODUCER: Welcome to The Real News Network. I’m Jaisal Noor in Baltimore. And welcome to this latest edition of The Ford Report.

Thank you so much for joining us again, Glen.

NOOR: So, Glen, as you know, this week marks the 50th anniversary of the launch of the war on poverty by President Lyndon Johnson, a series of programs, such as Medicare, Medicaid, food stamps, the Economic Opportunity Act. And, you know, this is being widely discussed by pundits on the left and right alike.

But there is some important context that’s being left out of this discussion, as, you know, is very predictable in America today, foremost that this was a response to the popular movements of the time that were just about, you know, clambering on the gates, demanding real change. And, you know, a good case could be made that the war on poverty were actually concessions to subvert or to appease the masses. What are your thoughts about that?

And I think we ought to make a distinction between programs like Medicare and Medicaid and some very targeted programs that were designed to tamp down feelings and tempers in the ghetto. And those were the kinds of programs that we saw, that were quite visible on the streets–the new storefront community operations that were subsidized by the government or by cooperating philanthropic organizations or by intermediate kinds of groups like the Urban League. And so you saw a kind of established storefront politics appear on the city streets of many, especially, big northern cities. And these were designed to do what you were directly addressing, and that is appease the young folks on the streets, get them–the idea was to get them involved in responsible community activities that would deal with basic social ills in the community, not for them to become highly political and agitators, that the appeasement was designed to keep them from becoming wildcards in the community. And that didn’t work too well from the state’s standpoint, and we saw a freezing out of those kinds of programs, those highly visible storefront entities as the ’60s war on.

NOOR: And, Glen, so, as the pattern in American politics that, you know, often repeats itself, the war on poverty was launched under a Democratic administration. Talk about what happened next under Nixon and subsequent Republican administrations, especially Reagan, that really started rolling back some of these policies, which continued under Clinton, and take us to today under President Obama.

FORD: Yeah. I think you can divide the war on poverty or that era up into three categories. We have the war on poverty, beginning in 1965. That’s Lyndon Johnson’s approach to the ghetto. Then we have the war on drugs, beginning with Richard Nixon in 1968. And that signals a much more militarized approach to the ferment that was happening in black communities across the country. And that is quickly followed around 1970 by the onset of what we now know as mass black incarceration, in which war was made on young black people as a class of folk. And that’s a very short period of time, but we see three distinct phases that the state’s response to the black rebellion, the kind of shape that those responses took on.

NOOR: And so, Glen, according to the Pew Research Center, the difference in black and white incomes grew from about $19,000 in 1967 to roughly $27,000 in 2011, and the black-white wealth gap has widened even further. Black household wealth was 7 percent that of white households. What’s your response?

FORD: According to a study that’s cited by Pamela Brown in a recent issue, today the black-white household wealth gap stands at 19 to 1. That is, white households have 19 times as much wealth as the typical black household. Back in 1984, the ratio was about 12 to 1. And in 1995–and this is the high economic point for black folks in comparison to whites–it was only 7 to 1. So we have seen a collapse, if you will, of the black economy during the last decade or so.

NOOR: And take us to today under the Obama administration, the first African-American president of the United States. How would you evaluate his policies on addressing poverty?

FORD: He does not address poverty, not with government direct intervention. All of his proposals for jobs actually are bundles of tax incentives, ways of luring businessmen to do that which they do not want to do, which is to invest in factories, to invest in the kind of enterprises that would lead to a generally higher living standard, invest in anything that would require the larger compensation to workers. So President Obama has a totally privatized approach.

If we compare it to what–look in hindsight to the gargantuan efforts of the ’60s, it’s no approach whatsoever. During this period of the ’60s, the state was really experimenting as it confronted a people who were concerned not just about the bread-and-butter issues of life, but much more intensely about the meaning of self-determination. In fact, it was a turn that people were discovering. And they were trying to figure out, well, what does that mean in terms of my relationship to my community and my community’s relationship to the larger society and the state? And so they experimented during the ’60s to divert or appease this rising tide of black independent political thought.

By the 1970s, that was abandoned, and the big, large sledgehammer of the law became the main tool to dealing with black folks and their complaints. And we are still in that period today. And Barack Obama has done nothing to reverse that long-term trend in the United States.

NOOR: Glen Ford, thank you so much for joining us. And we’ll certainly continue this conversation.