Why is the German Left Unconditionally Supporting Israel?

Hermann Dierkes was personally attacked and called an anti-Semite, because he dared express solidarity with the Palestinian freedom struggle

Hermann Dierkes was personally attacked and called an anti-Semite, because he dared express solidarity with the Palestinian freedom struggle 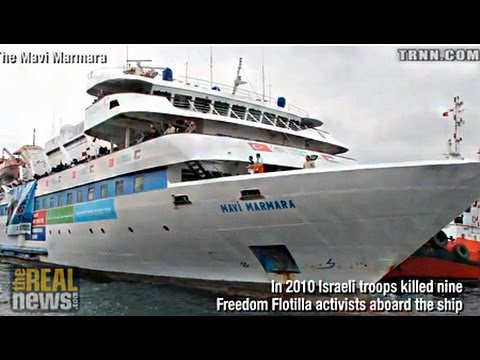 SHIR HEVER, TRNN PRODUCER: Welcome to the Real News Network. I am Shir Hever in Germany.

The Left Party in Germany has an unusual position on the issue of Israel/Palestine. Compared with most left parties and movements in Europe, the party is reluctant to criticize Israel’s policies of occupation, apartheid, and colonialism.

Hermann Dierkes is an activist in Die Linke, the Left Party of Germany, and a member of the city council of Duisburg in Germany. He was a long-time worker in the steel industry and a well-known trade unionist, and today he is a pensioner.

HERMANN DIERKES, CITY COUNCIL MEMBER, DUISBURG, GERMANY (SUBTITLED TRANSL.): I am convinced that a special obligation has been placed upon us, because in the name of Germany, with the brutal murder of the European Jews, a tragedy against humanity has been committed, the Holocaust, or even similar racist exclusion, violence, and annihilation must never be allowed to happen again. This was the consensus of the survivors, not just to remember Auschwitz and Buchenwald, and indeed nowhere and against no one. And we must guard against its beginning, before it is too late. But this obligation must be universally perceived.

Expulsion and ethnic cleansing of the Arab and especially Palestinian population, this is the great difference from the apartheid system in South Africa, in order to make room for their own population, to ensure the demographic majority, and to suppress any attempt by the colonized and the disenfranchised to establish their own state, a strong structural inequality in basic rights and in civil rights, to the point of creating a social apartheid space which defines certain ethnic and/or religious communities as enemies and as inferior, especially Muslims, but not only.

It [Israel] defines itself as a bulwark of defense for the West against the Arabic-Muslim world. The proportion of religious justifications and national-religious political groups has increased enormously in the last three decades, although in Israel it has always been the case that you don’t have to believe in God; you just need to believe that he promised Palestine to the Jews. Today, Israel is not only a result of the Zionist colonial project, but also an instrument to further its expansion.

HEVER: Hermann Dierkes will speak to us about this special political situation in Germany in which even the left is reluctant to criticize Israeli policies.

HEVER: So how did you become interested in the issue of Israel and Palestine? And what kind of activities did you take once you become involved?

DIERKES: Well, already, as a political leftist activist since the early ’70s, one of my most important political teachers was the Jewish socialist and trade unionist Jakob Moneta, a kibbutz worker in the ’40s until he went back to Europe disgusted by Zionist politics, and who died last year at the age of 98. I had the pleasure to meet activists of the then Matzpen organization in Israel, like [[email protected]’taoUt] from Haifa and many others.

Nowadays I’m working with Christians, humanists, leftists, and exiled Palestinians in the German Palestinian society. I have been to Israel and Palestine various times, at last in 2011 when I organized a group of 30 friends participating in a seminary of the AIC in Jerusalem and Beit Sahour. I have been to various social forums from the outset in 2001 where the question of Israel-Palestine was always an important issue on the agenda. I took part in the discussion to clarify the problematic positions of the party Die Linke [incompr.] toward Israel-Palestine, published many articles, published a book, and gave interviews.

HEVER: You said it was important to clarify the position of Die Linke Party on Palestine. Why is that important? Is there a special reason why the German left should take a position on the Palestinian struggle for freedom? Or is it just that Germany, like any other country, should adopt a coherent position?

DIERKES: No, absolutely. No. We have the historic burden through Judeocide and a certain obligation for the left. Even nowadays, you can’t jump out of history and you have to work on it. And Germany is one of the most important states with trading with Israel. Germany is delivering many, many arms to Israel, and even Israel is selling arms to Germany, security installations, and so on. And Germany is a very important state of the European Union. It’s massively interfering in what’s going on in the Middle East. And so, as a leftist, you have to tackle that question and you have to take a position.

HEVER: You are a member of the Left Party, Die Linke. What can you tell us happened to you specifically after you expressed your opinions and because of the actions that you took?

DIERKES: I was confronted with a horrible smear campaign in spring 2009 after a local meeting on Palestine and on the Gaza onslaught of the Israeli army. In that meeting we presented Mohammed Alatar’s film The Iron Wall. And I spoke out in favor of BDS. At that time, I stood as the left candidate for major in our city of Duisburg during the municipality elections. A real tsunami of vicious attacks, slanders, and threats came down on me. This was a very hard time for me. But the worst thing that happened was that the considerable part of high-ranking members of the left took their distances from me and accused me of encouraging antisemitism, if not being an antisemitist. For many weeks there was a public stoning in the mainstream media in Germany and by many mainstream politicians, some church leaders and so on. And in the end, the whole party was finally slandered as being antisemitic, or at least tolerating antisemites in its ranks. Members of the inner party sect shalom, real hardliners defending Zionist Israel and militant anti-Muslim propagandists, tried to oust me from the party.

HEVER: Now, the chairman of the party, Gregor Gysi, he formulated this document for Die Linke defining what the position of the party should be on the matter, and also defining what kind of activities should be called antisemitic. Can you talk a little about this letter?

DIERKES: Not only about the letter. And I even wouldn’t personalize the question on the Gregor Gysi [incompr.] It still seems to be a common position among many more or more or less prominent party leaders and parliamentarians not to criticize Israel, at least not too harshly. In 2009, after this horrible smear campaign against me and more comrades, like Norman [‘fEsSEn] and comrades in Bremen and so on, both the parliamentary faction and later the party leadership voted for very problematic resolutions upholding a kind of equidistance between Israel as an oppressor state and the Palestinian people as being oppressed. In 2010, one more resolution was whipped through by Gregor and others against the protest of one-third of our parliamentarians in the federal parliament not to support the BDS campaign, not to take part once more in the Gaza Freedom Flotilla from 2011 on, and not to engage in one-state discussions. In the new party program, adopted by the [ErfoUrt] conference in late 2011, the mere discussion of amendments to the draft program was suppressed as to whip through positions like we fight against any kind of antisemitism, the left is in particular obliged [incompr.] the right of existence of Israel, and we should strive for a two-state solution as the only way to solve the conflict.

HEVER: So the Left Party in Germany is saying that there is only one solution, and they want to impose the two-state solution on the Palestinians.

DIERKES: That’s the official position. And there is in my opinion no clear definition at all what falls into the category of antisemitism. The party members should not take action at ideas or joint movements due to many statements of party leaders, like [pregoU] and others, wherever they create the impression of being antisemite or anti-Israel. BDS, the Freedom Flotilla, and the discussion about the alternative Palestinian or Palestinian-Jewish statehood is regularly included in this way of reasoning. Of course, the main purpose of that kind of verdicts and resolutions is to silence the party, foremost that party who thinks different or is even engaged in the solidarity movement.

HEVER: For our viewers who don’t know, BDS stands for boycott, divestment, and sanctions, and it’s a global movement to put economic and cultural pressure on Israel to end its colonial, apartheid, and occupation policies. The Freedom Flotilla is a movement which attempts to break the siege on the Gaza Strip by sending ships loaded with humanitarian supplies.

Now, you are describing about the Left Party in Germany something which sounds rather unusual. We see in most countries in Europe and around the world that the left parties tend to be more in solidarity with the Palestinians or at least more critical of Israel. And it’s also consistent with the left politics in general to take the side of the repressed and the weak.

But why would you say that in Germany the situation is so different? Why is the Left Party taking this position of unconditional support to Israel, even to the point where they harass and attack members of the party who express solidarity with Palestinians?

DIERKES: This solidarity movement rightly so criticized this stance, positioning of the party, including many Israeli peace activists and Palestinians. I am fighting with many others to correct these politics of the Left Party. But we still have a long way to go. In my opinion, one main reason for this kind of positioning is to prepare for a governmental coalition if you nowadays in Germany reenter on the [incompr.]

HEVER: The federal state of Germany.

DIERKES: The federal state, or in the federation, the government. And you will have it together, let’s say, with the Green Party or Social Democrats. This is one major point, to unconditionally defend the security of Israel as the reason of state, as Angela Merkel put it in 2008 when she gave a speech in the Knesset.

HEVER: Raison d’état, the French term for reason of state. So you’re saying that the mainstream political parties and the right political parties in Germany already support Israel anyway, and the left is willing to adopt this position in order to possibly join the coalition government.

DIERKES: Yes, but it’s also part and parcel of the politics of the Green Party, and it’s still the main reasoning of Social Democrats as well.

HEVER: Well, thank you very much for joining us, Hermann.

HEVER: And thank you for joining us on The Real News Network.