Professor Norman Finkelstein outlines the obstacles to holding Israel accountable for war crimes at the International Criminal Court. One of Israel's main allies in undermining the effort is Germany.

Professor Norman Finkelstein outlines the obstacles to holding Israel accountable for war crimes at the International Criminal Court. One of Israel's main allies in undermining the effort is Germany. 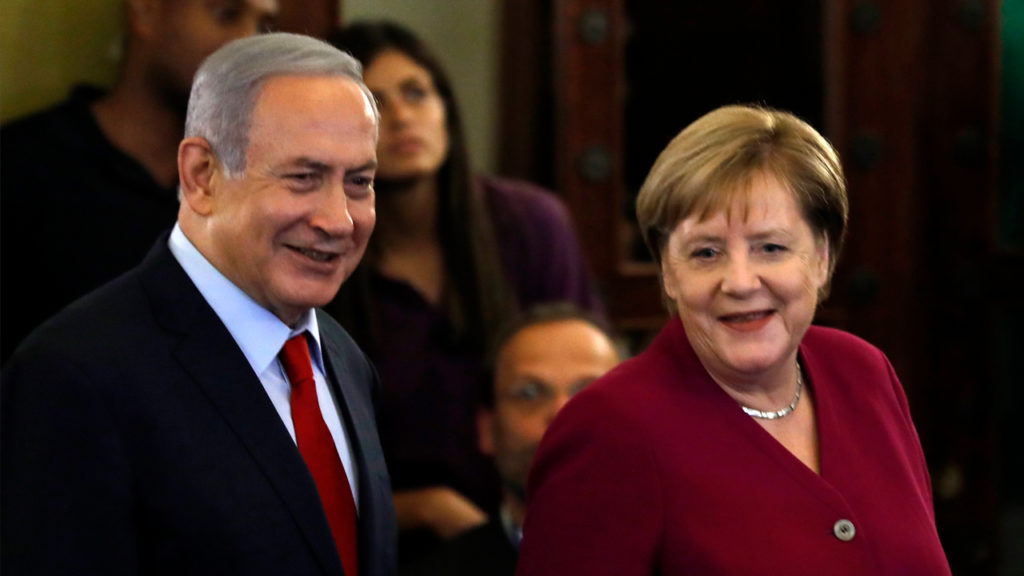 The Israeli government is trying everything in its power to derail an investigation by the International Criminal Court into Israeli war crimes against Palestinians. Israeli Prime Minister Netanyahu has even called the ICC anti-Semitic and has rallied allies to oppose any investigation. Austria, the Czech Republic, Hungary, and, most surprisingly, Germany have all offered themselves as so-called “friends of the court” to the ICC to argue that it has no jurisdiction in the case against Israel. On February 11, Jürgen Schulz, Germany’s Deputy Permanent Representative to the UN, spoke against Trump’s “deal of the century” for Middle East peace, but he also presented the German position on the ICC’s case against Israel.

Jürgen Schulz: Germany remains firmly committed to a negotiated two-state solution based on the 4th of June 1967 lines, with equivalent land swaps as may be agreed between the parties, with Jerusalem as future capital of both states, and with the state of Israel and an independent, democratic, contiguous, sovereign, and viable state of Palestine living side by side in peace, security, and mutual recognition. We continue to believe that the two-state solution is the only viable solution to the Israeli-Palestinian conflict that meets Israeli and Palestinian security needs.

Greg Wilpert: The investigation has not begun yet but is expected to be resubmitted to the ICC for approval very soon. The proposed investigation focuses on Operation Protective Edge, Israel’s invasion of Gaza in the summer of 2014, when it killed as many as 2,300 Palestinians and wounded as many as 10,000 over a six-week period. ICC chief prosecutor Fatou Bensouda submitted a petition for an investigation into Israeli war crimes last December, but was required to resubmit her petition when her 110-page document was rejected for being too long.

Joining me now to discuss Israel’s efforts to avoid ICC prosecution is Norman Finkelstein. He is professor of political theory at the City University of New York. His most recent book is I Accuse!: Herewith A Proof Beyond A Reasonable Doubt That ICC Chief Prosecutor Fatou Bensouda Whitewashed Israel. Thanks for joining us today, Norman.

Norman Finkelst…: Thank you for having me.

Greg Wilpert: We just heard earlier an example of one out of hundreds of German officials who insist that the two-state solution is still valid for Germany, but Germany does not recognize the state of Palestine and abstained in the UN General Assembly vote in November of 2012 on granting Palestine a representation in the United Nations, a vote that eventually passed without Germany’s support.

Now, the argument of Germany is that the ICC has no jurisdiction over the occupied West Bank and Gaza Strip because Palestine is not a state, so it cannot be a part of the Rome Statute that established the ICC. Now, why then does Germany continue to pretend to support a two-state solution when in fact its actions actually say the opposite?

Norman Finkelst…: Well, allow me two things. First of all, allow me to set out the background, and then secondly, to address directly your question.

There have been now two what are called “referrals,” the technical term for complaints. Two referrals that have been filed with the ICC, the International Criminal Court, pertaining to the occupied Palestinian territories. The first referral was filed not by the state of Palestine, but the state of the Comoros. The Comoros was the state to which the flagship Mavi Marmara was registered. Your listeners might recall that in May 2010, Israel assaulted the humanitarian flotilla en route to Gaza to try to lift the blockade and provide humanitarian aid to the people of Gaza. Israel attacked the Mavi Marmara or attack the entire flotilla and killed several passengers aboard the Mavi Marmara.

Now, simultaneously with that first referral from the state of the Comoros, there is a second referral from the state of Palestine. And that complaint, the non-technical term, that referral, the technical term, it bears basically, not entirely, but it bears basically on two aspects of Israeli actions in the Occupied Palestinian Territories. Number one, the settlements enterprise in the West Bank. And number two, as you mentioned, the Israeli attack on Gaza during July, August 2014. That case, too, as you can see, has been dragging on for a long time. We’re way past Operation Protective Edge in 2014. That case, too, has been dragging on.

Now where do we stand? She says, in her opinion, there’s a legitimate case, there is sufficient gravity. In her opinion, the ICC does have jurisdiction because Palestine is a state. There are two caveats which lead me to believe she wasn’t acting in good faith.

Caveat number one. The presiding judge in the court that’s going to rule over jurisdiction, what’s called the Pre-Trial Chamber, the PTC, the Pre-Trial Chamber, the presiding judge is just this revolting, wretched lackey for Israel. His name is Peter Kovacs. He was actually a thousand times worse during the Mavi Marmara case than Fatou Bensouda. He was in the Pre-trial Chamber in the Mavi Marmara case also, and he was awful. There is no possibility on God’s earth, there is none whatsoever that Peter Kovacs … There are three judges. He’s the presiding judge. That he will rule in favor of ICC jurisdiction. That’s a done deal. He’s not going to do it.

Number two, it has to be granted that this whole question of jurisdiction is muddled because Germany is going to argue that a Palestinian state remains still an aspiration, it’s not yet a reality. And given it’s aspirational and not an actuality, then it has no standing to bring a referral in the ICC.

And there has now been a pile-up by cowardly, craven states. Australia, Germany, the Czech Republic, all of whom are trying to get into the good graces of the United States, who are piling up against the Palestinians at the ICC to block jurisdiction.

Now, what’s the bottom line? The bottom line is this. Since 2006, I’ll speak now of Gaza, the Palestinians in Gaza have been living under an inhuman and illegal and immoral, a medieval blockade siege targeting the civilian population. It’s left Gaza in an utterly wretched state, one which is just barely, just barely at this point, livable.

The Palestinians have tried armed resistance, but on a kind of pitiful, with no offense intended, a pitiful level. It didn’t succeed. They then tried beginning two years ago, nonviolent mass resistance. The Great March of Return began March 31st or March 30th, 2018. Israel just picked off these Palestinian demonstrators like fish in a barrel. They targeted nonviolent demonstrators who posed no threat whatsoever to these snipers. The snipers sometimes shooting people five and 600 meters away, completely unarmed. It was a massacre. It was, in the classic term, a massacre, a daily massacre in Gaza.

The nonviolent resistance, it didn’t succeed for various reasons not worth going into now.

Greg Wilpert: And what does it leave us with in terms of what Palestinians can actually do now given the situation?

Norman Finkelst…: That’s my point. And now they made a recourse to the International Criminal Court, and now the International Criminal Court will almost certainly turn its back on the people of Gaza. The fact of the matter is Germany, Federal Republic of Germany, has left the fate of the Palestinians in Gaza in the hands of what Bernie Sanders, our current presidential aspirant, says repeatedly. He says the head of state in Israel is a “reactionary racist.” They’ve left the fate of the Palestinians in the hands of a reactionary racist. They have no rights whatsoever currently in the situation at hand. They have no legal rights.

That’s the message at the Federal Republic of Germany is transmitting to the Palestinians. You have no legal rights whatsoever. You have no human rights. The siege of Gaza is illegal under international law. It’s a form of collective punishment. You have no human rights under international law. Your only option, your only recourse is to leave your fate in the hands of a reactionary racist and, I would add, a certifiable war criminal insofar as he’s presiding over the criminal settlement enterprise in the West Bank and the murderous, criminal assault on Gaza during Operation Protective Edge in 2014.

There is now one state between the Mediterranean and the Jordan, and in that state, the Palestinian population of the West Bank and Gaza, they are effectively slaves. Israel is now a slave state. Germany has consigned them to the fate of slaves devoid of any rights.

Greg Wilpert: Just one last point. I mean, I think I would like to get you to comment very briefly if you can, just on the irony that the ICC was created basically as an outgrowth of the Nuremberg trials following the Second World War when victorious Allied forces tried Nazi war criminals, but there was no institutionalized court to hold individuals accountable for their crimes until the ICC was founded. Now, of course, what do you think of this irony now that Israel and Germany are on the same side on this issue of basically denying ICC effectiveness in a clear violation or a clear commission of work crimes?

Norman Finkelst…: That’s one irony. The other irony is the German government never ceases to proclaim every day it’s trying to learn and implement the lessons from World War II. And as it beats its collective breast and pretends to be trying to learn the lessons of the Nazi Holocaust, it strips Palestinians, human beings, lest we forget, it strips Palestinians of any rights whatsoever and leaves their fate in the hands of a reactionary racist war criminal. That’s pretty pitiful.

Greg Wilpert: Okay. We’re going to leave it there for now. I was speaking to Norman Finkelstein, professor of political theory at the City University of New York. Thanks again, Norman, for having joined us today.

Norman Finkelst…: Thank you so much.

Greg Wilpert: And thank you for joining The Real News Network.