CEOs claim the US has the world's highest corporate tax rate, but they actually pay less than most workers

CEOs claim the US has the world's highest corporate tax rate, but they actually pay less than most workers 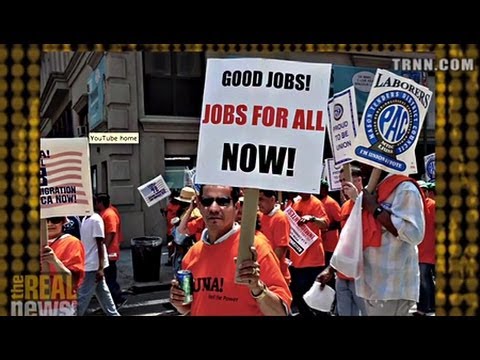 The nonpartisan Government Accountability Office released a report which finds that the average tax rate for corporations is 12.6 percent. That’s only a third of the nominal tax rate.

Here to discuss all this is Gerry Epstein. He is a regular contributor to The Real News and the codirector of PERI institute at UMass Amherst.

Thanks for joining us, Gerry.

DESVARIEUX: So, first of all, Gerry, can you define for our viewers what is the difference between the nominal tax rate and the effective tax rate?

EPSTEIN: Yeah. Well, sure. The study itself didn’t talk about which ones were paying more and which ones were paying less. But you’re absolutely right. These corporations–and this was true of Mitt Romney, too, in the election kept talking about U.S. corporate tax rates are the highest in the world, we have to cut U.S. corporate tax rates to make us more competitive. But in fact, as this study shows, U.S. multinational corporations, the really big corporations in the U.S., have all kinds of ways of avoiding taxes. And this is true across many sectors. If you look at some other studies that have been done, by the Citizens for Tax Justice, for example, you find that companies in the computer sector, like Dell Corporation, Apple–there was a big study and kind of a controversy about Apple recently–if you look at pharmaceuticals like Eli Lilly, you look at electronics and manufacturing like General Electric, a lot of different kinds of companies use similar or the same kinds of tax avoidance techniques to pay very little or almost no federal taxes.

DESVARIEUX: Also, there are different strategies to avoid taxes. Can you describe some of those strategies for us?

EPSTEIN: Yes. There are a lot of complex strategies that these corporations, with the help of very highly paid lawyers and tax accountants, can use to avoid paying taxes and get their effective tax rate down to 12.6 percent or lower. One has to do with shifting profits or supposed profits to locations that have low tax rates. So, for example, there are a number of tax havens like the Cayman Islands, Bermuda. Even serious countries like Switzerland, the Netherlands are effectively tax havens. And so what corporations are able to do is use techniques to make it appear that profits are being made in these tax havens and not in the United States or in Germany or the United Kingdom where tax rates might be higher. So if the profits are appearing in low-tax places, then they have to pay very little taxes on them.

A third strategy they use is complex derivatives strategies to defer profits for many years into the future or to make it appear that profits are overseas rather than in the United States. And then they defer bringing the money back and they don’t have to pay taxes on it. Notice that there is a huge incentive in the tax code with this deferral for companies to shift their profits overseas. And, of course, that could reduce investment and employment here in the United States.

DESVARIEUX: Let’s talk about some of the reductions that we are seeing across the country, in state legislatures specifically, dealing with unemployment benefits and, as we’ve reported here on The Real News, just cutting, quote-unquote, entitlement programs that we’re hearing the right label them as, social safety net, really. So, Gerry, can you talk a little bit about comparing the state legislatures’ desire to give corporation tax breaks as well as cutting these programs that we’re talking about?

EPSTEIN: Right. So there are a number of proposals on the table being pushed by mostly corporations and their lobbyists to cut corporate taxes in various ways, claiming that this will generate more jobs and employment. And the states here in the United States have been engaging in this game for many years now where they give incentives for corporations to build plant and equipment in their states, give subsidies, lower tax rates, and so forth, in the hope that they’ll bring more jobs and more employment and more tax revenue. But studies done by the Federal Reserve Bank of Minneapolis, as well as many other economists have studied, showed that in fact these kinds of tax breaks do not generate many jobs, do not generate more tax revenue, in fact erode the tax base for these states. And so the states find themselves in a fiscal crisis, and they have to cut back on education spending, health spending, and other kind of job-promotion spending as well.

Now, similarly, what the corporations and lobbyists are calling for now is a tax amnesty, that is, let all these corporations who have taken their money using all these tricks overseas in the last decade or so, and let them bring that money back for free and not have to pay any taxes on it. Well, this again is a total charade, a total ruse, because something similar was done in the 1990s along the same lines. This didn’t generate more jobs or more investment. What it mostly generated was higher bonuses and pay for the CEOs of these corporations. In fact, most studies show that cutting corporate tax rates is a very ineffective tool for generating employment and investment and demand. It’s much better to invest in infrastructure, in education and job subsidies. If you want to subsidize something, you can subsidize employment.

DESVARIEUX: Well, thank you so much for joining us, Gerry.

EPSTEIN: Thank you very much.

DESVARIEUX: Thank you for joining us on The Real News Network.