What Happened to Regulating the Banks?

State Subsidies to Attract Corporate Investment Should be Banned 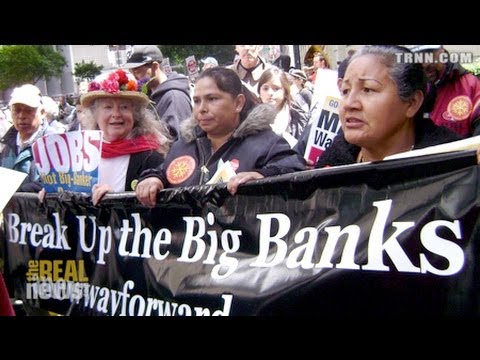 It’s just about four years ago that the big crash began, and in 2008 we were told we were on the precipice of a financial apocalypse. What was to be done? We were told what we needed was stronger regulation; this was all the product of too much deregulation. And one of the issues that was focused on was proprietary trading, where big banks, instead of just representing clients like investors or pension funds, gambled their own money, sometimes even against their own clients. And what was needed, we were told, was the Volcker rule. That would stop banks from doing this kind of proprietary trading.

So where are we at with such regulations? Now joining us to talk about all of this is Gerry Epstein. He’s the codirector of the PERI institute in Amherst, Massachusetts. Thanks for joining us, Gerry.

JAY: So, Gerry, you’ve been part of some of the reform groups that have been lobbying in Washington and fighting for some real financial reform. How is this campaign going?

EPSTEIN: Well, we’re getting a lot of pushback from the banking industry, which is investing millions of dollars to lobby against these rules. What’s been happening with the Volcker rule is the regulators came out with proposed rules to implement the Volcker rule. As you know, the Dodd-Frank law left a lot of things open for regulators to write specific rules, which created this terrain for enormous amounts of lobbying byâ€”mostly by bankers.

So, as part if this, they recently came out with the set of proposed rules for the Volckerâ€”implementing the Volcker rule. And this is a document that’s, you know, over 200 pages long. The actual rule part of the document is about 35 pages. But what it reflects is a widening of the exceptions, many of which had already beenâ€”there had already been too many exceptions to begin with. So now what we’re trying to do is to organize people to narrow the exceptions once more, to keep the focus on limiting this dangerous proprietary trading.

I was recently at a conference organized by the Americans for Financial Reform, which is a group that is leading the fight for better financial regulation. There are two very broad ideas within the Volcker rule. Number one is that banks should be functioning to help the real economy, rather than to engage in risky kinds of activities for their own account. And if they’re going to have access to the social safety net, the bailouts by the government, or borrowing from the Federal Reserve, then they have to not only serve more social needs, but they have to take less risky bets. And so, number one, that is the main principle, and anything that the regulators do has to be consistent with implementing that principle.

Second thing that’s in the Volcker rule that’s so important is to try to eliminate these conflicts of interest that you just referred to, where Goldman Sachs or Citibank packaged up mortgages into these bundles that they knew were going to fail, and then bet against them, and then sold them off to their customers without telling them. So what we’re trying to do is keep the eyes on these two main principles.

JAY: So the reason why all this matters so much is because the banks are still too big to fail. This kind of structural blackmail they were able to exert over the public is still there. They’re still making risky investments. I mean, not much has really changed from 2008 and the possibilities of another crash, another bailout. But they’re carrying on anyway.

EPSTEIN: That is a good point that you make about too big to fail. [When we] were initially going down the road for regulatory reform and financial reform, there were a lot of people who correctly argued, in my opinion, that we really needed to break up the banks, that we could no longer have a situation where banks were too important and too big to fail, because otherwise we were going to get back into this situation. And the Obama administration and many of theâ€”even the Democrats in Congress didn’t support that, largely because they still depend on the political and financial support of the big banks.

So plan B is to say, okay, well, if you’re going to keep some of these banks that are still too big to fail, you really have to rein in their risky activities so that it makes it less likely that the public is going to have to bail them out. And that’s what the Volcker rule, among other things, was designed to try to do.

But imagine this. You have five or six people on staff at the Americans for Financial Reform. You have a scattered group of academics and financial people who are helping them out. You have hundreds of lobbyists working for Citibank and Goldman Sachs with millions of dollars. It’s really in some ways an impossible fight.

So I think that’s why it’s so important, what’s happening with the Occupy movements, that they are really bringing some kind of outside force to bear on these broad issues. I was amazed that at this conference in Washington on the Volcker rule there were two representatives of the Occupy movement there, and they were trying to learn more about the Volcker rule and what it really might mean to really rein in this kind of speculative activity. And so I think it is important that there be this external pressure, because the Obama administration, unfortunately, is still really, for the most part, in the pockets of Wall Street.

JAY: So if the banks and all their army of lobbyists are able to slow this down and water the regulatory regimes down and make it very difficult to get any meaningful reform, does it get to a point where the people fighting for these reforms need to somewhat shift their focus and push for something new? Many people have talked about creating banks asâ€”banking as a public utility, you know, banking with some kind of public interest mandate. I mean, is that the necessary next step?

EPSTEIN: I think we really have to push harder on these more radical reforms, because it is important [incompr.] some of the Dodd-Frank reforms can be and could be if they were implemented properly. In the end they’re probably not, for the most part, going to be implemented properly. The Commodity Futures Trading Commission implemented a very watered-down rule to limit commodityâ€”you know, speculation in commodity markets. And there’s a whole set of rules that have been really watered down.

The Republicans have put together a bill that has some bipartisan support, that says there have to be very expensive and extensive cost-benefit analyses to prove that regulations are not too costly, whereas in my view, forâ€”at least for the financialâ€”many financial issues, the onus should be the other way, that the bankers should prove that these financial innovations are safe and useful before they’re allowed to implement them.

So everything in terms of the regulatory system is still worth fighting for, but it’s being bogged down. And we have to insist on more radical reform, so, for example, banks as public utilities. At Demos, which is a think tankâ€”a progressive think tank in Washington, Heather McGhee and people there are pushing for stateâ€”publicly owned banks, and they’re moving forward on work in that area.

We have to continue with the idea of breaking up the large banks so that they’re not too big to fail. We have to, I think, really push harder on that, because the Greek crisis, with the credit default swaps in many banks in the United States (we don’t know exactly where they are), they’re going to put these banks in risk again. And are we going to have another big bank bailout? I think we have to move beyond that.

JAY: Thanks very much for joining us, Gerry.