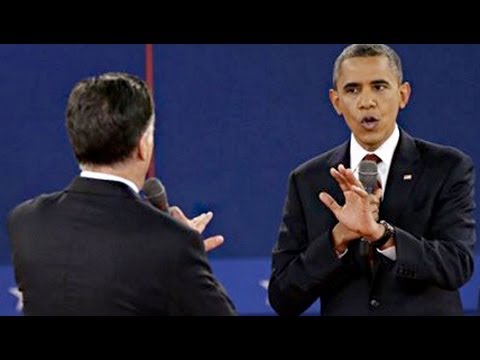 And now joining us to give his views on the presidential debate, the second debate, is Gerry Epstein. Gerry is the codirector of the Political Economy Research Institute, known as PERI, in Amherst, Massachusetts. And he’s a professor of economics there. Thanks for joining us, Gerry.

JAY: So what did you make of the economics presented by the two candidates?

EPSTEIN: Well, there was much less difference presented than one would have hoped, and there was a lot left on the table by both of them. Of course, Romney’s really tried to move towards the center and deny the drastic cuts in the budget and for social spending and the massive increases in military spending that he wants. He wants to deny that he’s going toâ€”his arithmetic doesn’t work, and so he will lead to a massive increase in the budget deficit.

But Obama left so many things unsaid. He sounded like a kind of mild Republican in his approach to economics.

JAY: What are examples of that?

EPSTEIN: Well, first of all, of course, he didn’t say anything about poverty. He talked a little bit about, you know, building ladders for those who want to get ahead, but there’s almost nothing there about that.

So I was not necessarily disappointed in Obama, ’cause I didn’t expect it, but it just shows how narrow the discussion is.

JAY: Yeah. I’mâ€”it seems remarkable, ’cause even within Obama’s kind of boundaries of where he’s willing to go in terms of philisophically and politically, he could have said more about the causes of the crisis in ’08. He has suggested some of that in the past. And this issue of wages and lack of demand, of course, they all ignore this completely, the idea that wages need to go up for more people to be employed and for the economy to move. It’s completely off the table as far as any kind of discussion.

EPSTEIN: That’s right. He really doesn’t project a vision of what the problem is short-term or long-term with the economy and how promoting wage-led growth is really a solution.

So it just makes clear once again what we’ve known is that he’s better than Romney by far, for a lot of reasons, but the only way that he’s going to promote the kinds of policies that we need is if workers and community organizers and those on the left really push him if he gets reelected.

JAY: And why do you think he doesn’t hit Romney on this regulation question? I mean, it’s notâ€”you know, 2008 is not that long ago. The issue of the lack of financial regulation, even though, you know, my opinion is that’s only a piece of why there was the meltdown in ’08, but certainly it’s a significant piece, he didn’t hit him on it at all. And Romney essentially wants to get rid of Doddâ€“Frank and deregulate.

EPSTEIN: Yeah. Once again Obama’s playing the same card he played all along, it seems to me, which is he still wants to win back Wall Street. The financial contributions of Wall Street to his campaign are way down. They’ve moved over to Romney. But he desperately wants to get that back. I think that’s clearly one of the reasons.

The other thing about the discussion that was totally disingenuous wasâ€”on both sides was all thisâ€”especially on Romney’s side, was the China bashing. You know darned well that once heâ€”if he were to get elected, Romney wouldn’t say squat about China. And Obama has been very weak on trade issues as well.

JAY: What did you make of that lastâ€”.

JAY: And what did you make of this Romney commentâ€”I assume he may have said this before in the campaign, but I have to confess I’m not following every word he says, so it’s the first time I heard it, but that he would declare China a currency manipulator on day one, put tariffs on their products if they don’t change. In other words, he would declare a trade war with China. I mean, does he mean a word of this?

EPSTEIN: No. It just shows that he’s really desperate. He knows this is a big issue in Ohio and Ohio and some other places. But there’s no way that he would declare China an exchange rate manipulator, because that would declare trade war with China, which is not anything that multinational capital wants. They want to be able to set up shop in China, export to the United States. And that calls for a moderate or even a low exchange rate. So I’m sure Romney was just lying through his teeth on that.

JAY: Okay. So just finally, with all your critique of President Obama, you did suggest that he’sâ€”you know, you think he’s way better anyway. So if you’re in a swing state, how do you vote?

EPSTEIN: I vote for Obama. Look, it’s the differenceâ€”there’s just no question. It’s the difference between staving off a total takeover by right-wing oil and gas interests, anti-women interests, anti-gay interestsâ€”they’ll destroy the Supreme Court even more than it’s messed up now. And on economic issues, Obama is slightly better in terms of employment and inequality. So there’s no question about it.

But Obama will not do much on his own. It really takes a concerted, massive effort on the part of those on the left and workers to push him and the Democratic Party.

JAY: Okay. Thanks for joining us, Gerry.