Trump Reiterates Support for a New Glass-Steagall Act, But Will it Pass Congress?

Trump administration support for reinstating Glass-Steagall Act is an effort to appeal to Trump's base, but won't go anywhere. It would be beneficial, though, if it doesn't mean also deregulating the finance sector says Gerald Epstein of PERI

Trump administration support for reinstating Glass-Steagall Act is an effort to appeal to Trump's base, but won't go anywhere. It would be beneficial, though, if it doesn't mean also deregulating the finance sector says Gerald Epstein of PERI 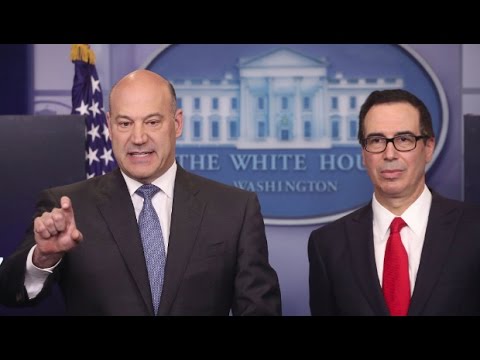 Earlier this month, President Trump reiterated his commitment to a campaign promise that he made last year during the presidential campaign to break up large banks and to reinstate a new version of the so-called Glass-Steagall Act. This is the law that for over 60 years separated investment banks from commercial banks. The law was repealed in 1999 under President Bill Clinton. Some economists say that the repeal of the Glass-Steagall Act contributed to the 2008 financial crisis. Others say that other forms of banking deregulation was far more important for having caused the crisis.

As the case may be, progressive senators such as Bernie Sanders and Elizabeth Warren have also proposed reintroducing a new Glass-Steagall Act, arguing it would be better to protect savings accounts of ordinary citizens. Joining us now to examine this issue is Gerald Epstein. Gerald is professor of economics at UMass Amherst, and he is the co-director of the Political Economy Research Institute at UMass Amherst. Thanks for joining me today, Gerry.

GERALD EPSTEIN: Thanks for having me, Sharmini.

SHARMINI PERIES: Gerry, not only did Trump mention reinstating Glass-Steagall during his campaign, but the Republican Party even included it in a statement in their campaign documents. However, Trump is also proposing to significantly deregulate the banking sector. How do you explain Trump’s positions on the financial industry and is this a contradictory approach?

GERALD EPSTEIN: Yeah, it is a contradictory approach at one level, but in fact, Trump is doing this kind of thing all over the place. He’s talking about renegotiating NAFTA but promoting trade at the same time with China. It’s just one thing after another. I think part of it reflects these divisions within his administration and within his coalition, between on the one hand capitalist, Wall Street big business, and on the other hand trying to act as if he’s still going to do something for the working-class voters who voted for him. Part of it is trying to negotiate this division between part of his base, who don’t like the big banks, who want them broken up, and his money coalition, which is going to feed him the power that he needs and the money that he needs at the top, the bankers and the business people.

SHARMINI PERIES: Right. It’s interesting that, as you know, the Trump administration has decided not to make public, at least the records public, of who comes and goes from the White House. Anyone who’s lobbying him, who’s there from the banking industry, we wouldn’t even know. In your opinion, who in the Trump administration would stand to benefit from the reinstatement of the separation between financial and commercial banking?

GERALD EPSTEIN: There’s been some interesting arguments made by Dennis Kelleher at Better Markets, who was on the Hill for a long time and understands these processes quite well. He makes an interesting point that Gary Cohn and Goldman Sachs, Gary Cohn used to be the head of Goldman Sachs, is an example of an investment bank that would actually possibly benefit from this. That is, if the Glass-Steagall Act that Trump is proposing is a complete substitute for the Dodd-Frank and any other financial regulations, what it would do would be to free up Goldman Sachs and all the other investment banks that decided to go to that side of the divide and have very little regulations on them, and let them do whatever they want. At this point, after having been bailed out by the taxpayer in 2008, they’re in pretty good shape, so they could go off to the races doing what they were doing before with very little regulation. The Goldman Sachses of the world wouldn’t actually be hurt by this, and it could actually benefit from it, especially if this is a cover for getting rid of all of Dodd-Frank and all the other regulation.

SHARMINI PERIES: Right. What about on the political side? Wall Street more generally is quite opposed to a reinstatement of this law, but given that Republicans are close to Wall Street and they now have control over Congress, and as you say, Wall Street might be open to all of this, but these guys are the ones that are lining the pockets of Congress members as well. Something like this, do you think that it’s likely to happen given all of these interests?

GERALD EPSTEIN: No, I don’t think it is. I think it’s a lot of smoke and mirrors. I think what’s likely to happen is the massive deregulation of Wall Street and the banks. There’s the Choice Act. There’s other deregulatory acts that are being proposed to make it almost impossible to regulate anything, including Wall Street. I think that’s the major thrust of what’s coming down the pipe. I think most of this talk about breaking up the banks on the Trump side is throwing some red meat to the base, but it’s not going to get much further than that.

GERALD EPSTEIN: As you said, Senator Warren along with McCain, Cantwell, and King have introduced this 21st-century Glass-Steagall Act, which is an updated version of Glass-Steagall, which is designed to separate investment and commercial banking. The idea is to not let commercial banks that have the support of the taxpayer, access to the Federal Reserve liquidity and safety net, etc., make it so that they cannot engage in really speculative and dangerous activities to reduce the chances that they’ll have to be bailed out in the future. On the other hand, the idea is to have investment banks not be able to engage in accepting deposits and the like, and they can perhaps take a riskier position.

The second reason we have to break up the big banks is because of the political power the big banks have, as we just talked about, in organizing Congress, organizing Washington. I think a 21st-century Glass-Steagall Act is one way to start breaking up the big banks, and it has to be done in combination with reinforcing the regulations that are already on the books, so leverage requirements, capital requirements, etc., not as a substitute for these.

I think there’s a lot to be said for working with the kinds of proposals that Warren and Bernie Sanders and so forth have proposed, and try to make sure that they’re done in such a way that they end up actually in breaking up the political behemoths and the economic behemoths that are these big banks.

SHARMINI PERIES: Right. Lastly, Gerry, if you believe that this is all somewhat smoke and mirrors, and this isn’t actually going to be implemented, how close are we? Given what’s going on in the economy, there’s various bubbles again blowing up, and the economy is supposedly growing, the stock market is certainly growing. How close are we to another financial collapse of the kind we saw in 2008?

GERALD EPSTEIN: It’s really hard to say. The banks are sitting on a lot of liquidity. They have huge safety nets and cushions right now, because they got bailed out by all of us. I don’t think that the amount of leverage in the system, the amount of risky debt, is near what it was in 2007-2008. I also don’t think that there’s an obvious one bubble out there like the real estate markets we saw then.

More likely is going to be some constitutional crisis, a major military adventure by the Trump administration, something of that nature. Of course, that’ll interact with the financial markets and possibly lead to serious financial instability, which could in turn engender some kind of financial crisis. I think things are very dangerous looking forward, but it’s unlikely we’re going to see something quite like what we saw in 2007-2008 any time soon.

SHARMINI PERIES: All right, Gerry. I thank you so much for joining us today, and we look forward to having you back.

GERALD EPSTEIN: Thanks a lot.